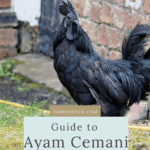 Are you interested in owning an exceptional breed of chicken?

The Ayam Cemani is extremely rare, stunning and unique.  If you’re looking for a chicken that is going to wow everyone that sees it, this is the breed for you.

Keep reading to learn more about these gorgeous chickens. 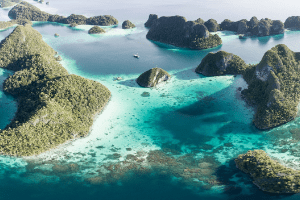 The breed was developed on an Indonesian island similar to these.

The Ayam Cemani is a breed of chicken that originated in Indonesia.

Fun fact: in Indonesian, Ayam means chicken and Cemani refers to the village where the breed originated.

The breed is thought to have come up one of two different ways.

Some people believe the breed is a descendant of the Ayam Bekishar.

The Ayam Bekishar originated by crossing green jungle fowl and domesticated breeds.  There is evidence of this and it’s quite tricky to do because not all of the offspring created are fertile.

Others believe that the breed is a landrace breed.

These black chickens were kept and used for their ‘mystical’ qualities.  They are especially sought after in Asian countries and thought to have medicinal powers. 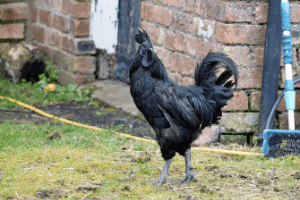 Roosters from this breed have a unique crow and were often used as foghorns on ships and boats.  This is a tradition that continues today.

The coloration seen in the breed is the result of unique genetic makeup (more on that later) that creates an all black bird.  The birds occurred naturally but were not specifically bred for until the 20th century.

Ayam Cemanis are kept in many countries today in small populations.  They can be found in the Netherlands, Germany, Slovakia, the Czech Republic and the United States.

Dutch breeder Jan Steverink imported them into Europe in 1998.  They have spread in popularity since. 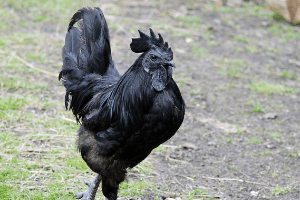 Ayam Cemani chickens are completely black.  They have black feathers, combs, wattles and even black internal organs and muscle fibers.

The breed standard includes birds with uniform, all-black plumage and coloring as well as an up-right, gamey stance.

No feather color other than black is allowed.  All skin, the feet, toe nails, beak and even the inside of the tongue and mouth should be completely black in color.

Faded feathers, toenails that aren’t black or uneven coloration is not allowed.

The Ayam Cemani can have grey inside the mouth, but no color besides grey and black in the mouth is allowed. 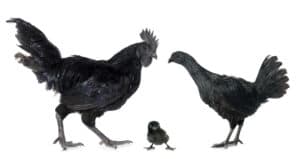 The Ayam Cemani Breeders Association, established in 2015, has created and refined a breed standard.

These birds should be all black with no other color visible.

The feathers can have a beetle-green or purple iridescence to them in sunlight.  This is similar to the feather color seen in some French Black Marans and Black Jersey Giants. 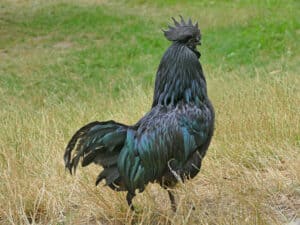 The feathers are tucked tightly to the body, similar to game breeds.  They aren’t fluffy at all.

Ayam Cemanis stand upright and look alert at all times.  Birds should be muscular and fit looking.

People that own Ayam Cemanis say that the breed is docile and friendly.  You may read online that these birds can be flighty, but most Ayam Cemani owners would disagree.

They are intelligent and easy to both handle and maintain, even the roosters.  These birds are always alert, which may be why some people might think they are flighty. 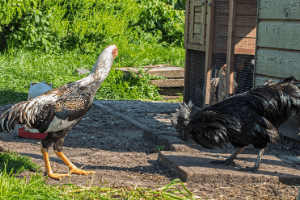 You may imagine this all-black bird to be aggressive, but it really isn’t.

The phrase ‘don’t judge a book by it’s cover’ fits them perfectly!

They are sweet birds and can make great pets.

Why are Ayam Cemani black?

The Ayam Cemani are black due to hyperpigmentation, or fibromelanosis.

Both of these terms are used to describe the presence of mutant genes that cause the all-black pigmentation.  The gene responsible for fibromelanosis makes the bird’s body create excessive amounts of pigmentation, causing the dark color.

The gene that causes fibromelanosis is recessive.  This means that a bird must have two copies of the gene in order to have the all black features. 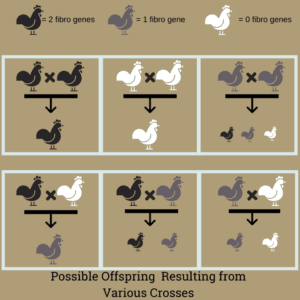 It can be difficult to breed these birds successfully when you’re just starting out.  There is a second gene type that can cause confusion and is often confused with two copies of the fibromelanosis gene.

Birds with one copy of each gene type may not produce all black babies since they can pass on both types of genes to their offspring.

The best way to create true Ayam Cemanis is to breed birds that have two copies of the fibromelanosis gene.

The Ayam Cemani is a generally healthy breed of chicken and doesn’t have health issues related with it.

The breed is hardy and tolerates most environments well.

If you’re interested in breeding these birds, it’s important to really understand how the genetics of the breed works to make sure that you produce the true black birds.

Are they suitable for backyard life?

Yes.  Although they come with a hefty price tag, they make good pets.  They tolerate children well and some owners even report their Ayam Cemani chickens following their children around in the yard.

They get along well with other animals and other chickens.

The breed is very alert and attentive. Not much goes on without their knowing.

Pests and insects in your yard won’t stand a chance.  They are also really good at making sure that livestock around them is pest-free.

They aren’t shy about cleaning insects off of cattle, horses, goats and pigs. 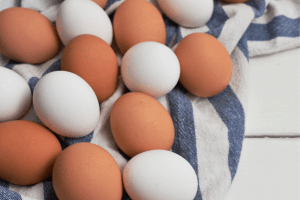 If you’re hoping for a reliable egg layer, you’ll be disappointed.

Hens don’t lay daily like many layer breeds.  In fact, they can go months without laying.

You can expect them to lay about 60 eggs per year.  They may lay for a while consistently and then all of a sudden stop laying.

They will lay eggs when they are just under a year old.  The eggs that they produce are a medium sized, light cream colored egg.

Do they lay black eggs?

No.  Although everything else about them is black, they do not lay black eggs.

The eggs are light cream in color. 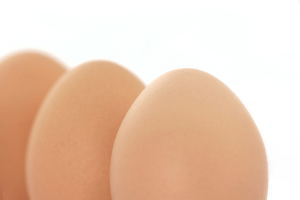 The shell of eggs is made from calcium carbonate and minerals that are white in color.  The eggs do not have the fibromelanosis the way the rest of the chicken does due to the minerals in the shell being white.

Is the Ayam Cemani right for you? 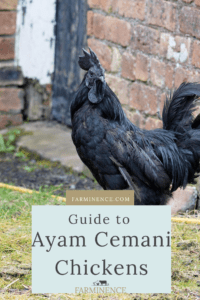 This probably depends on your budget and what you expect from your backyard flock.

If you’re looking for chickens that are ornamental and simply stunning to look at, then yes.  This would be the perfect bird for you.

Most people aren’t even aware that this breed exists.

If you want meat chickens or egg-layers, then this probably isn’t the breed for you.

They’re simply too expensive to purchase as a meat bird and they don’t make good layers at all.

Purchase this breed if you’re looking for an ornamental pet that will leave your friends and family in awe.

Why is it so sought after?

In the U.S., it is sought after because it’s so rare and unique.  Everyone wants to have something special, and the Ayam Cemani is definitely special.

In many Asian countries, the breed is used for medicinal purposes and sacrifices.

Many people believe that the all-black bird has magical abilities and can communicate with the spirit world.  Other people just view them as good luck charms.

The bird isn’t normally eaten and is more of a status symbol in other countries.  This is not a breed that most people can afford, so it’s not a breed for the common folk.

Where can you find Ayam Cemani chickens?

You can also find Ayam Cemani at Greenfire Farms and Feather Lover Farms.

This alone is why they aren’t for everyone!

Why are they so expensive?

There are a few reasons as to why they are so expensive.

It can be hard to breed true Ayam Cemanis.  You really have to understand the genetics behind the breed in order to breed them successfully.

There is a limited supply of what breeders can produce.

Hens don’t lay well and don’t produce many eggs.  Not all of the eggs that she will produce will hatch, further limiting the supply of chicks.

Many breeders are sold out years in advance and struggle to keep up with the demand.

Can you eat Ayam Cemani chickens?

You can eat Ayam Cemanis like you can any other breed.

The breed is smaller in size than typical meat breeds, so there won’t be as much meat there.

Interestingly, the meat of Ayam Cemani chickens is dark also.

The blood of the breed is not black, but it is darker than blood of other chicken breeds. 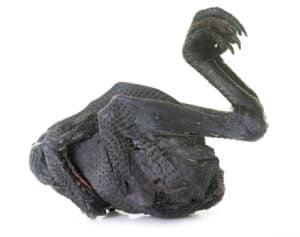 There are mixed views on eating meat from Ayam Cemanis.

Some people find the meat really tasty, others say that it tastes like any other chicken.

It’s up to you to decide whether you can handle eating meat this is black in color or not.

The Ayam Cemani is a truly unique breed.  There’s nothing else like them.

They would make excellent pets if they fit into your budget.

If you want to purchase Ayam Cemanis, then you’ll need to get them far in advance as most breeders stay sold out well in advance.

The breed is easy to maintain, friendly and attentive.  They are sure to turn heads in your yard.

The breed has a fun history that includes magical uses, seafaring voyages and high status.

If you’re looking for unique and different then this is the breed for you!

Is the Ayam Cemani right for you?  Do you know someone that has these rare chickens? Let me know!