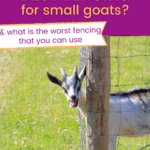 Best fencing for pygmy goats. What is the best fence to keep in pygmy goats or dwarf goats?

We raise a ton of animals on our farm.  We’ve got goats, dairy cows, horses, meat chickens, egg chickens, turkeys… the list goes on and on.  I have always loved animals.

In fact, my husband was NOT an animal person when we first started dating.  But, I remember very vividly telling him once that I had animals long before him and I would have animals long after him if needed.

Since then, he’s come to the dark side. 🙂

All jokes aside, I love animals.  One thing that I don’t love?

Chasing said animals if they escape their fences and decide to roam the neighborhood.  I can remember all too clearly the time that we had to chase three 450+ pound pigs back home after they broke out and got into a neighbor’s creek about a mile away.

Goats are natural escape artists.  They’re curious and will check fences constantly.  If there’s a chance that they can get out, they will.  And if you have small goats, like pygmy goats or Nigerian dwarf goats, the chance that they can squeeze out or under fencing is even greater.  Smaller bodies are harder to keep contained.

We have both Nigerian goats, which are mid-sized goats, and pygmy goats.  The Nigerians are larger and can be hard on the fence, but the pygmy goats are by far harder to keep in.

I don’t say that to discourage you from getting pygmy goats.  Or Nigerian dwarf goats.  They’re seriously cute and perfect for small acreage.  Keep in mind that pygmy and dwarf goats are smaller and you’ll want sturdier fencing to keep them in.

Are goats hard to keep in a fence?

Of all the livestock that we’ve owned, goats are the hardest to keep contained.  Like I mentioned above, they will test your fences constantly.  If a tree falls on your fence, they’ll be out almost as soon as the fence is down.

Electric fencing short out?  Your goats will notice it within about five minutes. No kidding.

If there’s a chance they can squeeze out, hop over or climb under it, they will.

Even if you think there’s no way they can squeeze out, hop over or climb under it.  Goats are curious animals and they explore the world around them with their mouth.  That’s actually part of the reason that people say ‘goats will eat anything’.  It’s not because they are actually eating everything, but they use their mouth to explore.

This means that they can open latches, also.  Once they accidentally figure out how to open a latch, they’re quick to do it again.  You’ll need sturdy latches that they can’t undo.  Don’t use a piece of rope tied in a slipknot to keep your goats in!

What fencing is best for goats? 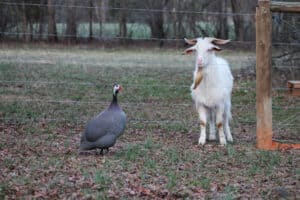 The best type of fencing for goats is the one that will keep them in.  Not the cheapest fence.

Trust me when I say it is well worth your sanity to spend a little more money to buy fencing that is actually going to keep your goats in place.  Well, don’t trust my word.  Trust my husband’s word.

When we first started fencing out place off for our goats, we went to Tractor Supply.  We had already ruled out barbed wire fencing.  I’m not a fan of barbed wire for any animal because it tends to leave messy and costly wounds.

This is especially true for goats.  If you’ve got females that are going to have babies, you don’t want to risk their udders.  Goats will try to climb through strands of barbed wire and their udders will snag on them and get ripped up.

You can’t keep a goat in barbed wire.  In fact, I’ve seen someone fence their property off with 9 strands of barbed wire for goats and then have to pull it all back up because it wasn’t keeping their goats in.

That’s a lot of time and money wasted.  And I can’t tell you how frustrated they were that even after all of that work, they were still having goats get out almost every day.

So, my husband and I were looking at fencing options.  My dear, sweet, naive husband suggested that we use field fencing.  Now, keep in mind that I have a bachelor’s degree… in animal science… I promptly said that field fencing was a bad idea for anything, especially goats.  Cows and horses get their feet caught in the squares.  Goats get their heads caught in the squares.

And sometimes, getting their heads out turns into something this side of a miracle. 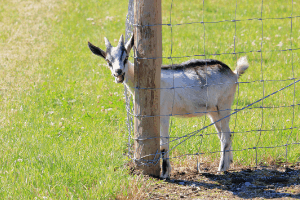 Well, sometimes dear, sweet husband has to learn the hard way.  He was convinced that field fencing would be fine for the goats.  It was a little cheaper than other fencing options, so he decided it would work.

Field fencing is quite hard to put up, especially if your property isn’t completely flat.  Ours wasn’t so it took forever to put up.  The first day that we turned the goats out into the new space… one of our does goat her head caught.  It only took her about 15 minutes to get her head caught.

Of course, this turned into a very frequent problem.  I don’t know how many times since then my husband has said ‘I wish we wouldn’t have gotten that field fence’.  I hate to say I told him so but luckily we only fenced a small holding pen with the field fence.

The rest of the 14 acres is fenced with electric fencing that is 100% more effective, easier to put up, and keeps all of the animals in.

What kind of fence do I need for pygmy goats?

There are only two types of fencing that I recommend if you’re going to have goats.

When goats are kept in electric fencing, they respect the barrier and won’t try to test it.  That keeps them off of your fence, which is the safest method of keeping them enclosed. They won’t push on the fence and steadily test it.

The only other option that I would recommend is fencing designed specifically for goats.  Goat fencing is a woven wire fencing that has small holes.  This is key guys.

Most pygmy and dwarf goats have horns, which means if they can get their heads through the fence then you’ll spend a lot of time getting heads out.

There are options for temporary goat fencing.  This electric netting is great if you’re running a brush clearing business, but it’s not ideal for a permanent fence.

You can also easily set up an electric fence for brush clearing that will work well instead of a temporary goat netting.

Best fencing option for keeping small goats in their pen

Small goats like dwarf goats and pygmy goats will be harder to keep in their fence than larger goats.  Larger goats need a larger hole to squeeze through than small goats.

The most effective fencing that we’ve found for small goats is electric fencing.  You can set it up easily with electric wire.  It’s much easier to put electric fencing up when your land isn’t exactly flat either.  Our land is pretty hilly, which makes woven wire fencing hard to put up.

When you’re putting up fencing to keep goats in, you want to take into consideration their size.  Since pygmy goats and Nigerian goats are small, your fence needs to be lower to the ground than it might be if you only had large goats or cattle.

Since we raise both small goats (our smallest goat is a pygmy doe that weighs about 17 pounds) and large livestock, we used electric fencing to cover all ranges. 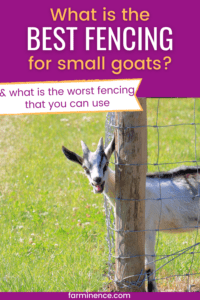 Our strand heights are:

It keeps our little goats in as well as our horses and cattle.

It’s important to make sure that your lowest strand is low enough to prevent your goats from scooting under it.  You also want the top strand to be high enough that the goats won’t be tempted to jump over it.

Once your goats touch the fence once, they’ll respect it enough to keep off of it.

The best electric fencing for goats is made with 16-gauge aluminum or steel wire.  The 17-gauge wire will work, but the 16 gauge is thicker and will hold up longer.

Also, don’t be tempted to buy the poly wire.  I can tell you from experience that it almost always becomes a knotted mess.  It’s hard to work with and can’t be as easily spliced if it breaks or needs repairs.  It also doesn’t seem to have as powerful of a shock and your goats may just walk right through it. Mine did.

You can find the electric tape, which is good for visibility, but I wouldn’t use this for a permanent fencing option.  It works well for temporary fences but when you want to set up permanent barriers, go with the aluminum wire.

Remember, electric fencing only works because it creates a mental barrier that the goats respect.  If it doesn’t deliver a shock, the goats won’t respect it and they will quickly figure out that they can squeeze out.

If you decide to go with a physical barrier that isn’t electric fencing, then the only other option I would recommend is goat fencing.

What is your favorite fencing to keep goats in? Let me know below!