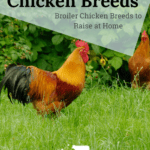 Raising meat chickens in your backyard is really satisfying.  If you’ve raised laying chickens, you’ll know how much of a difference there is in flavor and nutrition in a farm-egg than a store bought egg.  But did you know that you can expect the same type of quality in meat if you raise broiler chickens at home?

100 years ago, it was common for every home to have chickens that were raised for meat.  Many of these chickens were dual purpose breeds that could be raised for both meat and eggs.  The idea of raising meat chickens at home is again gaining popularity.  Nothing compares to a good, home-raised meat chicken.

One of my neighbors was talking about how her family raised chickens when she was a child.  She mentioned that back then, chicken seemed to taste more like, well… chicken.  I didn’t understand what she meant until we raised our own meat chickens for the first time.  Store bought chicken just doesn’t do real chicken justice.

You’re missing out on so much flavor with a store-bought chicken.  Not to mention the fact that they are usually pumped full of water and additives that you don’t need in a good chicken. 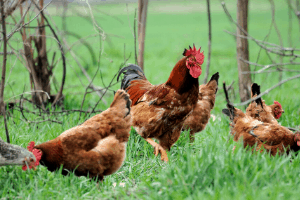 It’s important to realize that raising meat chickens is different than raising an egg chicken.  Depending on the breed, you may only have your chickens for about 6 weeks.  There’s also more work involved with meat chickens.  You’ll be feeding and harvesting them yourself.  Decide what breed you want to raise.  This will determine how you need to set up your coop and run as well as the type of feed that you’ll need to provide them.

There are several breeds of meat chickens that you need to consider if you are thinking about raising meat chickens at home.  There isn’t a ‘best’ breed of meat chicken.  In fact, all of the breeds listed below make for great broiler chickens.

However, the ‘best’ breed for you will be determined by your farm setup and your ideal way of raising meat birds.

There’s a good bit of variance among the meat breeds that we’re going to talk about today.  Before getting your mind set on a specific breed, consider what is going to work best for you.  Ask yourself questions like:

These questions are going to play a key role in determining which breed or breeds is best suited for you.  Some of the breeds cannot free-range and must be fed out.  Others don’t do well in confinement and must be raised on pasture.  There are some health benefits to raising your birds on pasture, if you can.

Keep these questions in mind as you read through the breeds to determine which is best suited for you.

I’m going to break down the best breeds that are suitable for meat production only.  I’m assuming that since you’re on this page, you want to raise birds for meat, not eggs.  You can keep meat birds alongside layers if you need to.  Use caution if you have layer chicks and broiler chicks though as the heavy broiler chicks can crush the smaller layer chicks. 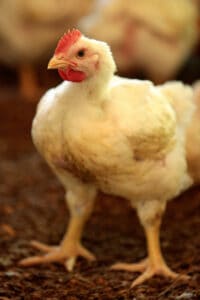 The Cornish cross is the most popular broiler breed raised, and for good reason.

Cornish cross broilers are developed by crossing a Cornish chicken with a Plymouth Rock chicken.

These hybrid birds have exceptionally fast growth rates.  This fast growth rate and the large quantity of meat they produce helped change the way that America viewed chickens.  Before the Cornish cross, meat birds were slow growing and ate tons of feed.  There wasn’t much meat on the chickens, so they were usually only eaten if necessary or it was a special occasion.

Cornish crosses made it affordable to eat chicken.  This is breed of chicken that you’ll see when you’re in the grocery store.

Cornish crosses are ready to harvest in as little as 6-8 weeks.  This rapid growth rate must be feed properly to keep going.

Expect to feed Cornish crosses a high-quality feed to ensure maximum growth.  These chickens grow so fast and get so big that they are usually incapable of breeding naturally.  You wouldn’t want to try to breed your own Cornish crosses though.

Since this is a hybrid breed, they wouldn’t breed true.  These birds are often harvested well before sexual maturity.  These are the perfect breed for someone that wants to raise meat chickens quickly and doesn’t want to keep them for eggs.

They do have some associated health problems.

Cornish crosses were developed for rapid muscle production.  This rapid growth and the high levels of protein that they require can make them susceptible to ascites, or water belly.  They also don’t do well if they aren’t harvested.  Their bodies aren’t designed to handle the excess muscle past their harvest weight.  Birds that aren’t harvested quickly develop bone and organ problems. 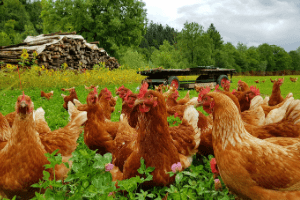 The Red Ranger is an excellent breed to raise if you wanted a meat breed that you could allow to free-range.

Red Rangers are the ideal breed for small, family farms and homesteaders that want to raise delicious meat at home.  This breed was developed to be raised on pasture, and they don’t do well cooped up. In fact, the breed was partially developed to help reduce pests without the use of pesticide.

These birds will consume large amounts of bugs on your property and can put a major dent in the amount of ticks and other insects that try to enter your yard.  If you’re raising Red Rangers, don’t treat your yard or their area with pesticides.  Any pesticides that get on the insects that they eat will be consumed also by the chickens.  You also don’t want to reduce the number of insects that your chickens can consume.

Don’t try to raise Red Rangers in confinement.  They have a strong need to be outside scratching and pecking.

Expect more equal proportions of white to dark meat in Red Rangers.  They aren’t as breast-heavy as Cornish crosses, but they still finish out a large carcass.

Raise Red Rangers if you:

For more information comparing the Cornish cross and Red Rangers, watch this video: 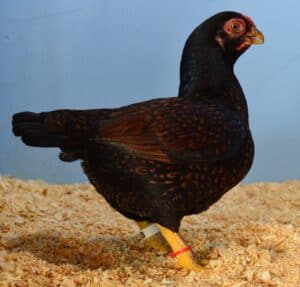 Most of the meat birds grown in the U.S. today are the result of a cross that includes the Cornish breed.

The Cornish Cross, for example, is created by crossing the White Cornish with a White Plymouth Rock.

Cornish Crosses have rapid growth rates that can result in health issues.  The regular Cornish breeds do not have those health problems as they are slower growing.

There are a few varieties of the Cornish, including the White-Laced Red Cornish, the Dark Cornish and the White Cornish.  All Cornish varieties are large, heavy-breasted birds.

Hens will weigh over 8 pounds and roosters weigh over 10 pounds.  They are very friendly and docile, despite their large size.

They aren’t very active and don’t make good foragers.  They can be kept as dual-purpose chickens as well and hens will go broody often.

These are excellent meat chickens for someone that wants a slower-growing meat chicken that can be raised in confinement.

Consider Cornish chickens if you: 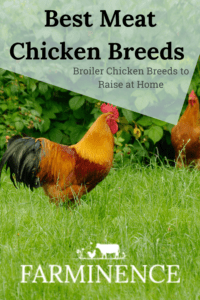 The Livestock Conservancy defines heritage breeds as: traditional livestock breeds that were raised by our forefathers. These are the breeds of a bygone era, before industrial agriculture became a mainstream practice.

Heritage breeds are breeds that were created by selectively breeding the best of the best over decades.  This resulted in many breeds that are well-rounded, often self-sufficient, can mate naturally and are excellent fits for small farmers and homesteaders.

Choose heritage breeds if you: 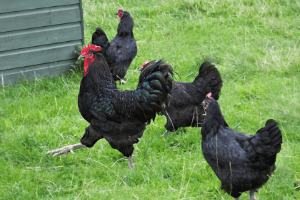 In the late 1800s, breeders wanted to create a breed of chicken that would rival the meatiness found in turkeys.

When the Black Jersey Giants were being created, some of the chicks were white in color.  These off-colored chicks, called ‘sports’, were used to develop the White Jersey Giant.

This slow-growing breed is one of the largest chicken breeds. Plan on them taking as mush as 9 months to reach harvest weight.  Jersey Giants are calm, gentle giants.

They are very friendly and aren’t usually picked on by other chickens in the flock.  They make good foragers and their large size makes them less susceptible to attacks from hawks.  The large bodies are full of muscle and they require ample exercise to stay healthy.  It’s not a good idea to keep Jersey Giants cooped up.

Hens will weigh nine pounds, with roosters weighing in at a whopping 11-13 pounds.  Some roosters can weigh up to 15 pounds.

They make an excellent dual-purpose breed.

Their large bodies take longer to reach mature weight, sometimes close to nine months.  Hens don’t usually go broody, but when they do, their massive weight can be hard on the eggs.  Broody Jersey Giants have been known to crack eggs with their large bodies. 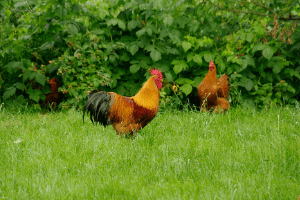 The New Hampshire Red was developed from selective breeding of the Rhode Island Red.

These chickens were developed with intensive selection, with breeders focusing on rapid growth, fast feathering, early maturity and vigor.  The focus on these traits led to less production of eggs than the Rhode Island Red and more production of meat.

The resulting chicken is a dual-purpose chicken that can both lay eggs and produce a fair amount of meat.

New Hampshire Reds are heavy birds, with hens weighing around 8 pounds and roosters weighing closer to 10 pounds.  Hens will lay as many as 180 large, brown eggs per year.  New Hampshire Red hens are prone to go broody and make good mothers.

These vigorous birds can become competitive and aggressive towards one another but are docile with humans.   New Hampshires are a less common breed of dual-purpose chicken that is well-suited to foraging or being raised in confinement. 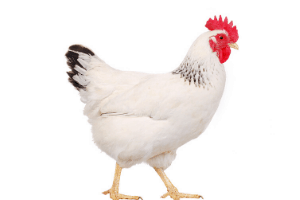 The Delaware breed is the result of a cross between New Hampshire Reds and Barred Rocks.  The breed is relatively new, being developed in the 1940s.

This breed was created to be a prolific egg-producer while also having good meat quality.  These calm chickens are white in color with black feathers around the neck and the tip of the tail.  There may be some black feathering along the back.

Delawares are well-suited to cold weather.  The reports of egg production are quite varied, with some as low as 180 eggs per year and some as high as 280 eggs per year.  Hens will lay large brown eggs.

The very docile Delaware makes for an excellent addition to any flock, but especially those of families.

The breed is heavy with hens weighing around 8 pounds.  The breed today is critically endangered as the breed has been used less for meat with the creation of more productive meat breeds.

Since the breed was developed with some meat characteristics in mind, they are fast growing birds. Delawares often reach harvest weight much faster than other heritage breeds.

Raising meat chickens at home is a great way to provide your family with fresh, tasty meat.  Once you raise broiler chickens at home, you won’t want to buy another store bought bird!

Think about whether you want to raise your birds in confinement or on pasture.

If you’re not sure about whether you’ll enjoy raising meat birds or not, I would recommend raising Cornish crosses first.  They have rapid growth and will produce a lot of meat for you.  Start with a few and then, if you enjoy the process, you may want to consider another breed.

The idea of having a self-sufficient breeding flock of meat chickens is ideal.  Heritage breeds will provide that for you.  With heritage breeds, you can hatch eggs and you won’t have to worry about purchasing new chicks to raise for meat every time your freezer gets low.