Buffalo gnats and chickens are a horrible combination.

Several weeks in the late spring and early summer bring buffalo gnats.  If you have chickens, this could be a real problem.

Learn what buffalo gnats are and how they can affect your chickens.

What are buffalo gnats?

Buffalo gnats, also called black flies or turkey gnats, are small, rounded flies that are less than an eight of an inch in length. 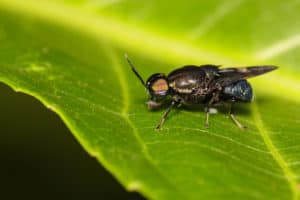 Buffalo gnats are most common in areas where there is a body of running water.  The female buffalo gnat lays her eggs in cool (50-60° F) running water like rivers and streams. 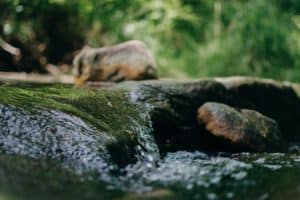 Even though the gnats lay eggs in rivers and streams, it can be hard to track down the source of the gnats.  These pesky gnats will often fly up to 10 miles away from where they hatched in search of prey.

Why are buffalo gnats harmful?

The huge swarms of buffalo gnats can take down flocks of chickens quickly.  The gnats have special receptors that allow them to detect carbon dioxide emissions in exhalations.  They can also detect sweat and fragrances.

Buffalo gnats will attack the wattles and combs of your chickens.  Watch for signs of discomfort in your chickens and constant scratching at the head or face.

Buffalo gnats and chickens are not a friendly combination.  There are four main ways that these unwelcome gnats can kill your chickens.

When a buffalo gnat bites, it creates a small cut. This cut pools up with blood and the gnat eats the blood.  Saliva mixes with the pooled blood while the gnat is eating.

A large amount of the toxins can get into the body and cause severe allergic reactions. The animal goes into anaphylactic shock or toxemia, resulting in death.

Buffalo gnats can carry disease-causing organisms in their saliva.

Chickens, turkeys, ducks and geese can catch Leucocytozoonosis from buffalo gnat saliva.  This malaria-like disease can be fatal.  Animals that survive the infection have weakened immune systems and reduced reproduction.

Symptoms of Leucocytozoonosis include diarrhea, dehydration, emaciation and convulsions.  Convulsions are usually followed by death.

Any time that the body is cut, clotting agents are released into the blood to reduce bleeding.  If you’re the buffalo gnat, this is bad news.

The buffalo gnat has developed strong anticoagulants, which are special proteins that prevent blood from clotting.  This allows the blood to continue to flow, creating a feast for the gnats.

If enough of the anticoagulant gets into the blood, it can be fatal.  Cuts made by the gnats will continue to bleed and can result in blood loss.  Large numbers of buffalo gnats can mean death by blood loss due to the anticoagulant.

Hemorrhaging is also a threat due to the anticoagulant.

Buffalo gnats attack animals in swarms.  They are attracted to the carbon dioxide emissions from exhalations.  It’s because of this that many animals, including chickens, are found dead due to suffocation.

The buffalo gnats can fill and block the nostrils in large enough numbers that the animal suffocates to death. 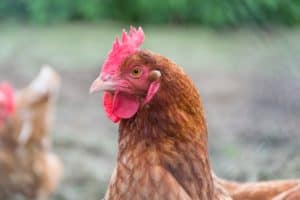 Reducing the harm from buffalo gnats to your chickens

There are a few things that you can due to reduce the damage buffalo gnats can do to your chickens.  It’s almost impossible to get rid of them but you can take some precautions to help your chickens out.

Buffalo gnats are only active from daylight-dusk.  After dark they aren’t out.

Try putting your flock up during the day in a dark coop.  Buffalo gnats do not like to enter enclosures, especially dark ones.

Turn the lights off in the coop.

Buffalo gnat populations are reduced significantly in windy weather.  Create wind in your coop by putting a fan on your chickens.

Place a fine mesh screen over the windows and vents of the coop to prevent any from coming inside. 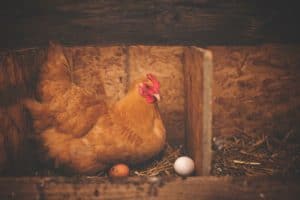 Keeping your flock inside of a dark coop with a fan going is one of the best ways to keep gnats off of them.

There are pesticides available that will kill and repel adults.  This is only a temporary fix though as it will need to be reapplied.

There are mixed reviews about what works the best.  Sprays containing DEET work well for some people, while others prefer sprays with the active ingredient permethrin.  Permectin II contains permethrin and is effective against buffalo gnats.  The active ingredients tetrachlovinphos and dichlorvos, like what are found in Ravap, are also effective.

Gnat foggers can be used to kill the adults.  They will only kill the adults that it comes into contact with so it’s very temporary.  As soon as more adults enter the area, the fogger will need to be used again to kill the new adults.

Some farmers insist that sprays containing citronella or vanilla have worked for them.

It might be a good idea to plant citronella plants around your chicken coop or run.   If this isn’t an option, use sprays containing citronella and spray your chickens down.

A vanilla spray can be made by mixing vanilla extract with water.  This can be used to mist the coop and the chickens.  If you have old vanilla beans or some extra vanilla extract, try adding it to your chickens’ dust bath.  Even if it doesn’t work to repel buffalo gnats, at least your chickens will smell good! 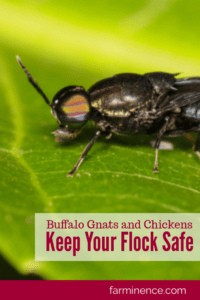 Reducing the impact of buffalo gnats on chickens

Keep your chickens as safe as you can during buffalo gnat season and cross your fingers for warm weather!

For more information about buffalo gnats, check out this article from University of Arkansas Research and Extension Service.