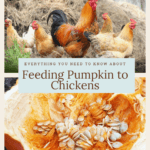 Can chickens eat pumpkins? Will chickens eat a pumpkin? What are the health benefits of feeding pumpkins to chickens? 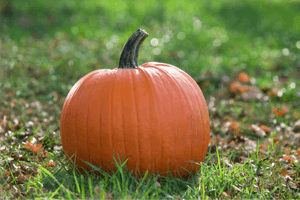 Fall is upon us and you may be questioning whether you’ll be able to use those pumpkins you just bought for anything after you’ve used them for decor or made them into jack o’ lanterns.

It makes me feel better to know that I can reuse something or get more use out of it than I originally intended.

Pumpkins are no exception.

I love the look of funky pumpkins and gourds in the fall with straw bales and scarecrows.  But I hate the fact that the pumpkins are bought and set out and then tossed a month or so later.

You may be surprised to learn that you can feed pumpkins to chickens.  You’ll be able to have cute fall decor and then turn that decor into chicken food after you take your fall decor down.

If you’re serious about keeping your chickens healthy, grab a copy of my FREE
chicken first aid kit checklist!

Will chickens eat a pumpkin?

Chickens will go crazy over pumpkins.

They may be hesitant at first when you put it in front of them, but don’t worry.  Once their curiosity kicks in they will start pecking at it.

After they taste it, they won’t be able to get enough!

Chickens will consume the entire pumpkin from the seeds, stringy guts, flesh and even some of the skin.

Check out this video to watch chickens eating a pumpkin:

Reasons to feed pumpkins to chickens

Getting more use out of your fall decor pumpkins and jack o lanterns is great, but there are even more reasons to feed pumpkin to your chickens.

There are two main reasons that you should feed pumpkin to your chickens (from your chicken’s point of view):

In the colder months, there just isn’t as much for your chickens to do.  If you normally let them out to forage, they will still go out, but there’s just not much out there.  The bugs and insects that they spend time hunting down just aren’t out in the colder months.

Chickens have a strong instinct to peck and need to exercise this daily.  Pumpkins have multiple textures and will encourage your chickens to use their pecking instinct.

One pumpkin can create hours of entertainment for your birds.

This is one of the best reasons to feed pumpkins to your chickens.

Pumpkins are loaded with nutrients that your chickens need.

Pumpkin is chock full of vitamins and nutrients to keep your chickens in excellent health.

How to Feed Pumpkins to Your Chickens

You may be wondering which parts of the pumpkin your chickens can eat.

Knowing which part of the pumpkin to feed your chickens is important.  It’s also important to make sure that what you’re giving them is actually healthy and nutritious. 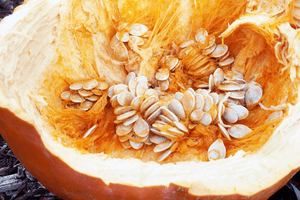 When you feed fresh pumpkin to your chickens, it’s a good idea to cut it in half.  Lay the halves skin side down so that the chickens can really get at the fleshy part. 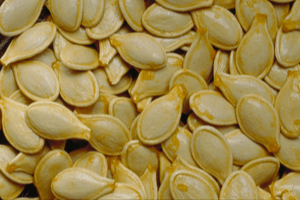 Chickens love seeds and grain of all kinds and pumpkin seeds are no exception.

If you plan on giving your chickens lost of pumpkin seeds, provide your chickens with plenty of grit.  Breaking down seeds requires grit and pumpkin seeds are larger than most, so make sure that your flock has access to the grit they need for breaking them down.

Also, make sure that they are fresh ones that you haven’t cooked and coated in sugar or seasonings that might be harmful to your chickens.

Many treats, flock blocks and specialty foods for chickens have pumpkin seeds in them.

These seeds are typically dried to extend the shelf life. 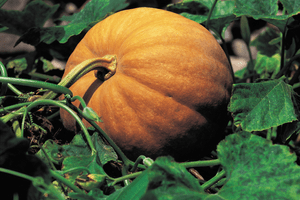 If you grow pumpkins at home, you may already know the answer to this question.

Chickens love the leaves of squashes, which includes pumpkins.  If your pumpkin has vine and leaves attached to it, feel free to give it to your chickens after you cut it off.

Are you growing pumpkins at home?

Then you’ll want to keep your chickens out of your pumpkin patch.  Pumpkin vines are sensitive and even stepping on them can kill a vine, much less your chicken eating the leaves off!

Canned pumpkin isn’t the best choice to give to your chickens.

Always feed your chickens fresh and raw pumpkin.  Stay away from giving them canned pumpkin which often has loads of added sugars and preservatives that can make your flock sick. 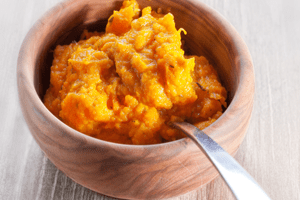 You may think that you need to puree your pumpkin for your chickens.

When you look at a pumpkin, you might be tempted to think that it’s much too big for a chicken to consume.  Don’t bother blending up the pumpkin for your chickens.

They can eat it just fine without you pureeing it.  In fact, pureeing it up takes away the entertainment that chickens can get out of eating pumpkin.

If you have leftover pumpkin that you pureed for a pie, then feel free to feed it to them.  Don’t feed it to them if you’ve added sugar to it.  Your chickens will think that it is sweet enough as is!

Can feeding pumpkins to chickens be harmful?

There are a few times when I wouldn’t allow my chickens to have pumpkin.

If you’re feeding them jack o’ lanterns that you carved, check the insides first.  Look for mold or rotten areas. 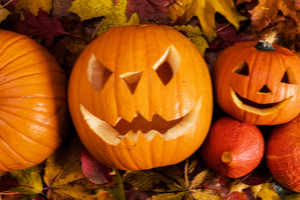 A bunch of mold or large areas of rot means it’s not safe for your chickens to eat and should be thrown out.  A small spot of mold can be cut off and the rest of the pumpkin can be fed to your chickens.

Don’t give them more than they can eat in a day.

Chickens aren’t the only animals that would love to chow down on a pumpkin.  Rodents and other scavengers will be attracted to the coop if they smell pumpkin.

To prevent this, pick up any pieces of pumpkin that weren’t eaten and take them out of the coop before dark.  This will keep unwanted animals from coming to the coop looking for an easy meal.

Don’t put a whole pumpkin in the coop.  Cut it in half and lay the halves skin side down.

If you put an entire pumpkin in for them, they will peck at the insides until it collapses on itself.  This won’t hurt your chickens unless it’s a massive pumpkin of course, but it will prevent them from being able to eat all of the pumpkin. 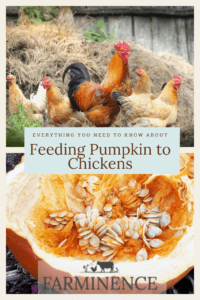 Using pumpkins as entertainment for your chickens

Chickens get bored in the late fall and winter months.

This is especially true for chickens that are used to foraging for their food.  There just isn’t enough to forage to keep them entertained.

Hanging treats that are somewhat tough can encourage pecking and chickens NEED to peck stuff.

If they are bored, they will peck at each other and can pick on chickens and cause injury.

Pumpkins are the perfect texture to allow chickens to peck away and will keep them entertained for hours.

Health Benefits of Pumpkin for Chickens 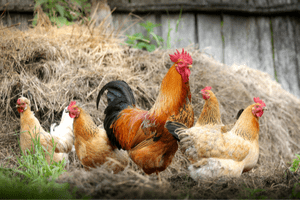 Nutrition facts for the pumpkin guts

The flesh and stringy parts of the pumpkin, or the guts, are loaded with nutrients:

Vitamin A is crucial to chicken health and unfortunately, is usually deficient in chicken diets.

It plays a major role in regenerating cells and boosting the immune system.

Vitamin B is important in energy metabolism which means it has the potential to affect the growth and productivity of your birds.

Chickens that are deficient in vitamin B will have slower growth rates and won’t lay as much.

It’s also extremely important in proper embryo development.  Hens with vitamin B deficiency will lay eggs that may not hatch well.

Long term deficiencies of vitamin B can lead to liver and kidney issues.

Vitamin C can be made by the chicken’s body, so it’s usually not an area of concern in chicken nutrition.

Chickens do need supplementing during times of stress however.  This could be during periods of rapid growth, during times of extreme heat or cold or changes in the flock.

Vitamin C helps to fight heat stress and can prevent and treat ascites in meat birds.

Embryos are dependent on zinc to develop properly.  If you have hens that you plan to hatch eggs from, give them zinc starting two weeks before they lay.

Deficiencies of zinc can lead to deformed bones and stunted growth. 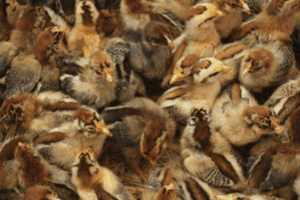 Potassium helps developing chicks grow properly.  Provide potassium to hens that you plan to hatch eggs from, like you would zinc.

An added bonus of feeding potassium can be seen in brown eggs.  Hens that are fed added potassium will produce eggs that are a richer orange color.

Zinc is found in the shell membrane of the pumpkin seed, so don’t shell the seeds before giving them to your chickens. 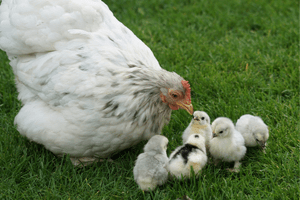 Zinc helps to improve the hatchability of eggs.

Vitamin E is a major component of a strong immune system.  It can help protect (not treat) against Coccidiosis, E. coli., and bronchitis.  Chickens that are deficient in vitamin E can develop wryneck.  If the deficiency continues, they can develop severe neurological problems.

Are pumpkin seeds a natural dewormer?

I’m sure that you’ve seen this claim if you’ve read about pumpkins and chickens.

It is true that pumpkins contain an amino acid called cucurbitacin.  This compound is found in many squashes and has been studied as a potential wormer for livestock.

With that being said, it’s needed in very large amounts to be effective at killing worms.  The amount of cucurbitacin that is found in pumpkins is not enough to worm your chickens.

They would have to consume ridiculous amounts of pumpkin to get the cucurbitacin they need to treat worms.

Don’t worry though.  Most chickens don’t have an issue with worms and will be just fine without wormer.

You can plant pumpkins to have a supply of nutrient-rich food for your chickens year round.

Some of the vitamins that pumpkins contain are known to help with heat stress and growth, so it’s a good idea to have them on hand so you can feed them when needed.

Pumpkins are a fall crop though and you can’t easily produce pumpkins year round, so you’ll have to store them.

To store pumpkins, it’s best to get them fresh off of the vine.

When they are removed from the vine, leave them in the sun for about two weeks to cure.  Store bought pumpkins are already cured. 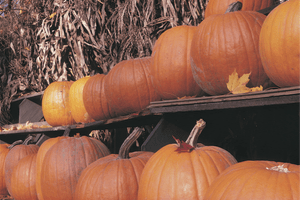 Once the pumpkins are cured, clean the outside with a dry towel.  Don’t put water on the pumpkin as it can leach into the skin and cause rot.

The oil creates a barrier that will help keep moisture and pathogens out of the pumpkin.

Once they are oiled, store them on a shelf in a cool (around 60° F) room in the dark.  Do not stack pumpkins on top of each other when you store them.

You can use pumpkin as an ingredient to make treats for your chickens.

You can create a ‘cake’ or a block with ingredients that you may already have.

Mix the ingredients in a dish to create a ‘block’ or ‘cake’ for your chickens.  Use a small amount of molasses as a binding agent to hold all of the ingredients together.

Do you feed your chickens pumpkins?  Do you have any good recipes for chicken treats that include pumpkin?