Everyone knows that ducks are excellent swimmers.  They spend the vast majority of their life in the water.  But what about their poultry cousins, the chicken?

Many small farms and homesteads have both chickens and ducks.  It’s an excellent way to increase the productivity of your farm, even if your space is small.  If you have chickens, you may have also wondered how you can help to cool them down in the middle of a summer heatwave.

Have you tried to put your chickens in a pool? Or maybe you’ve tossed a kiddie pool into their coop and filled it with cool water.

But the question still remains… can chickens actually swim?  There seems to be a good bit of debate on whether chickens can swim or not.

Let’s dig a little deeper and figure it out.

Chickens are not designed to swim.  Ducks, on the other hand, are designed to spend a large amount of time (if not all of their time) in the water.

So let’s talk about some of the differences between ducks and chickens.  What do ducks have that makes them such good swimmers that chickens lack?

Chickens don’t have this special webbing between their toes.  Instead, their toes are not webbed.  Chicken toes have long nails that they use to scratch up the ground in search of insects, seeds and food.

Without the webbing, chickens can still technically move water.  They just can’t do it as efficiently or quickly as ducks can.

Duck feathers are essentially waterproof.  A duck’s body has special oil glands that produce massive amounts of oil that is waterproof.

Each time the duck preens itself, it coats each one of its feathers with waterproof oil.  You can actually see ducks doing this frequently.  They’ll dip their head under their wing or under the feathers near their tail and then use their beak to smooth their feathers out.

Every time the duck’s beak runs over a feather, they spread oil over it.  This is why ducks never look ‘wet’, despite being in the water all of the time.

All birds, including chickens, have oil glands that they use to keep their feathers in healthy condition.  The difference comes in the amount of oil the glands produce.  Ducks produce a lot of oil.  Chickens still produce oil for their feathers, but not nearly as much as ducks. 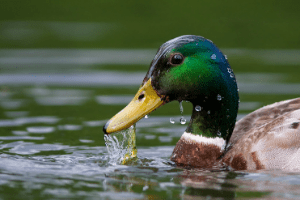 Chickens that are in the water for a long period of time will have wet feathers that don’t keep the water off of them.  Once the feathers get wet, they also get heavy, which makes it harder for chickens to swim.

Chicken breeds that have tight feathers will stay the dry longest.  Breeds like Rhode Island Reds, Andalusian, or other breeds with a game-chicken body shape will stay dry much longer than breeds with looser or fluffy feathering.  Silkies, breeds with feathered legs or dense, soft feathers will get wet faster.

Chickens and ducks can seem pretty comparable in size.  However, chickens tend to be more heavy-bodied than ducks. 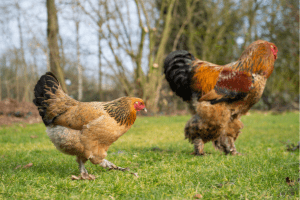 If you think about the overall body shape of a duck, it’s more horizontal and rectangular.  The weight of a duck’s body is spread out more evenly from head to tail.  There isn’t a ‘heavy’ end of a duck.

Chickens on the other end tend to be much heavier on the breast end, or head end.  This disproportioned weight causes the chicken to constantly struggle to keep its front end afloat.

4. Chickens can’t right themselves in the water.

When a duck gets off balance in the water, it can quickly adjust to keep itself upright.  Their overall weight distribution means that they don’t find themselves off balance that often either.

Can chickens go in pools?

Although chickens aren’t specifically designed to swim, they do seem to enjoy it.

A pool is a wonderful way to help keep your chickens cool in the summer.  If you’re putting them into a pool, make sure to supervise their swim time.  You don’t want chickens to drown while you aren’t paying attention.

Some chickens enjoy the water more than others.  Chickens that don’t like the water will freak out once they are in it.  Gently remove them from the water if they don’t seem to like it.

So, chickens can swim.  They aren’t horrible at it but they aren’t super efficient like ducks are either.

Most chickens that enjoy the water will get in and gently paddle themselves around.

But what about baby chicks or young chicks?

Avoid putting baby chicks or young chickens in the water. 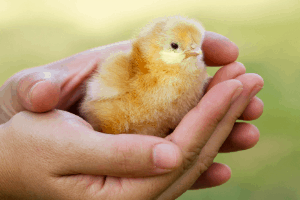 Young chicks are covered in fluffy downy feathers.  These feathers lack the ability to keep water off.  In fact, they’ll get soaked almost instantly.

You also need to consider the fact that young chicks can’t control their body temperatures well. (This is why they spend time in a brooder, where the temperature is warm and controlled)  Once chicks get wet and are exposed to the cool water, they can die quickly.

Will chickens die if they get wet?

This is an old wives tale that so many people think is true.

Have you ever heard the phrase ‘don’t let chickens out in the rain’?  I’ve heard it so many times!

My chickens free-range and they decide whether they want to come out of the coop or not each morning.  And guess what? They come out, even in heavy rain!  They will walk around, sopping wet with not a care in the world in heavy rain.

Now I know that we’re talking about chickens swimming.  It’s important to note that chickens can die when swimming. 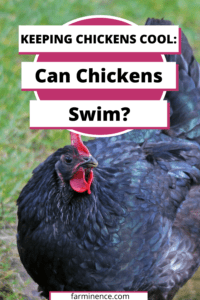 When chickens get too wet, they can start to get too cold.  If they can’t get out of the water, they could die from hypothermia.  CHickens also get exhausted much quicker than ducks when they are in the water.

Chickens have to work quite hard to swim, which is hard work.  If they can’t get out of the water once they get tired, they could eventually get too tired to try to get out or hold their head up and they could drown.

This is why it’s crucial to stand by them if they are in a pool.

Yes!  This is a wonderful way to give chickens the chance to swim and cool off without worrying about them drowning.

A plastic kiddie pool is shallow enough that you won’t have to worry about chickens not being able to escape the water.  They can simply step in or out of the pool as they want.

The plastic pools will hold up well in a chicken coop.  If they eventually crack and won’t hold water, you can repurpose them as a large dust bath space.

Chickens can swim, even though they aren’t physically designed for swimming.

In fact, many chickens seem to enjoy swimming.  Swimming can be a really good way to help your chickens cool down in the middle of a hot day.

You can put your chickens in a pool to swim.  If you put them into a large pool, make sure that you supervise their swimming time to prevent them from drowning.

Don’t put baby chicks or young chickens into water.  They will get wet too quickly and they won’t be able to regulate their body temperature well.  This can lead to them developing hypothermia, which can be fatal.

A safe option to allow chickens to cool off is with a kiddie pool.  A kiddie pool is small enough that they can get in and out of it as they want to.