There are several pig diseases that you should be aware of if you raise pigs.  I’ve listed the most common pig diseases.  Being aware of the diseases is important, but so is diagnosing pig diseases.  Pig diseases and symptoms will vary with age group, housing situations, stress level and environmental factors. 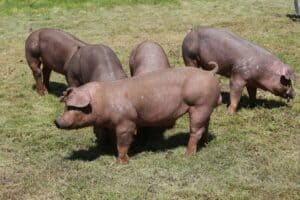 Can you identify common swine diseases and treat them?

Greasy pig goes by many names- greasy pig, exudative dermatitis, marmite disease, etc.  It is a skin infection that can be fatal if left untreated.

Greasy pig, also called Exudative dermatitis, is caused by several strains of the Staphylococcus hyicus bacteria. This bacteria lives on the pig’s skin naturally and doesn’t always cause infection. Greasy pig is more likely to occur if the pig is already suffering from:

Greasy pig is an easy disease to identify as it creates lesions on the skin.  Before the lesions occur, this swine disease will cause depression and anorexia.  The first lesions are easily missed.  Pigs will then develop brown spots on the face and the head.

The brown spots spread from the head towards the back of the pig.  The brown spots turn into brown and black crusty areas on the skin.  Lesions will continue to grow in size and eventually begin to merge with one another.

Greasy pig is most commonly seen in piglets that are less than eight weeks old.  It can be seen in older pigs but is generally less severe in older pigs.  Older pigs will usually only have head lesions. 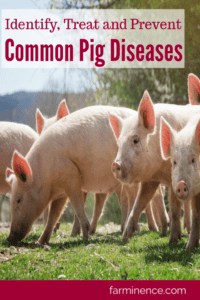 There is not a good treatment for greasy pig.  It is easier to prevent the disease than it is to treat it.

Preventing greasy pig can be accomplished by providing a better environment and sanitary conditions.  Greasy pig is hard to treat.

Coccidiosis is a common causes of scours in piglets. It accounts for approximately 1/3 of all piglet diarrhea cases.

Coccidiosis in swine is caused by Eimeria and Isospora. 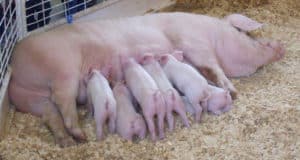 Coccidiosis causes swelling of the small intestine and diarrhea.

Diarrhea caused by coccidiosis is watery, greasy diarrhea that is usually a yellowish-white color.  The diarrhea is also very foul smelling and smells ‘sick’.

Coccidiosis is seen most commonly in piglets that are 5-15 days old.  It is less common, but does occur in older piglets that are one-three months old.  Older pigs will stay sick for approximately 7-10 days.

Coccidiosis creates weak, undersized and dehydrated piglets.  It can be fatal although the infection itself isn’t usually thought to be the direct cause of death.  Piglets that die are usually covered in liquid feces.  This causes them to remain damp and too cold, causing death.

Piglets that survive coccidiosis have a very high resistance to repeat infections.

Preventing coccidiosis can be accomplished by cleaning and sanitizing farrowing areas thoroughly between litters.  Some research suggests that coccidiosis is transmitted from sows to piglets.

Swine respiratory disease (SRD) is the #1 cause of pig mortality in the United States.

The symptoms of the various swine respiratory disease vary along with the causing organism.

APP is severe and highly contagious.  It can cause sudden death and shows few respiratory signs.  Pigs with APP have a decreased appetite, appear depressed and develop a high fever (up to 107 degrees F).

Late stage symptoms can include open-mouthed breathing, coughing and a foamy, blood-tinted discharge from the nose and mouth.

Some pigs with APP will develop blue skin from a lack of oxygen available in the blood stream.  Late stage symptoms indicate imminent death.

PRRS attacks white blood cells in the lungs.  This creates an ideal site for infection and usually leads to secondary infections in the lungs.  Pigs with PRRS will have a fever and will go off of feed.

PRRS doesn’t normally causes coughing like some of the other respiratory diseases.  It can be spread easily through secretions and bodily fluids.  The PRRS virus can also become airborne, traveling up to two miles.

SIV occurs rapidly (symptoms show within 12-48 hours after infection).  It is identified by a harsh, barking cough.  Pigs will also have flu-like symptoms including a decreased appetite, lethargy and high fevers (105-107 degrees F).

Fevered pigs will try to pile on top of one another.  SIV will also cause open-mouthed breathing that is labored.  This labored breathing will develop into ‘thumping’, a type of strained abdominal breathing.

Pleuropneumonia is highly contagious.  Pigs with pleuropneumonia will appear anorexic, develop a fever and have labored breathing.

Avoid high levels of stress, temperature fluctuations and damp environments.  All of these make pigs more likely to develop a respiratory infection.  Also, make sure that your pigs are not crowded in their confinements.  If needed, decrease your stocking rate. Pigs that are crowded together will spread infections rapidly.

Some of the respiratory diseases can be prevented with vaccines.  Unfortunately, not all of them have vaccines.  Check with your veterinarian to see which vaccines are available.  Also, many of these diseases are treatable only if they are caught early.

This disease is another common cause of diarrhea in young piglets. It is often associated with spirochaetal colitis.

Swine dysentrery (SD) is an infection that leads to swelling of the large intestine.  It is transmitted several ways:

Swine dysentery is first identified with a gray or yellow diarrhea.  The diarrhea has some mucous present.

Diarrhea becomes gradually more mucousy and bloody.  Pigs with dysentery will have continuous tail-twitching and may have a sunken, humped appearance.

The large amount of fresh blood in the feces can stain the perineal area.  Dysentery causes extreme and frequent diarrhea.  This leads to rapid dehydration.  You may notice pigs with SD drinking large amounts of water.

Dysentery is usually seen in piglets that are less than three weeks old.  It can be seen in all age groups but is much less common in older pigs.  Cases of dysentery rise in late summer and early fall.

Swine dysentery is problematic in the industry because antibiotic resistance is becoming increasingly popular.  Because of this, medication should be a last resort.

Pigs that have dysentery or are high risk for dysentery should be isolated from healthy pigs.  Areas where pigs with SD were should be thoroughly disinfected.

It’s also a good idea to have a good rodent control plan in place.  Rodents can carry dysentery. They can directly infect pigs through direct contact or indirectly through the contamination of feed.

Mastitis is an infection and/or inflammation of the milk producing (mammary) tissues of the udder. 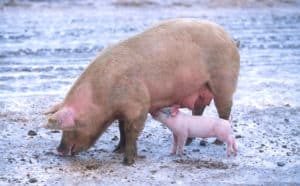 Mastitis is an infection or inflammation of the udder in nursing sows.

There are many reasons that mastitis can develop:

Mastitis is easily identified.  You’ll notice red, swollen, fevered udders.  It can affect one teat or multiple teats at a time.  The udder will be very sensitive and tender upon touching.

Sows with mastitis may not nurse their piglets.  Piglets will look unthrifty and will not gain weight.  They will also squeal to indicate that they are hungry.

Mastitis is most commonly seen at or right after farrowing.  It is also common to see at weaning.

Chronic mastitis will create large lumps of scar tissue.  Scar tissue can be felt in the udder and is not tender like an infected udder.

The udder can be cleaned daily with a dairy teat dip with iodine.  The iodine teat dip can be used before farrowing and up until 2 days after farrowing.  A feed with an antibiotic can also be given to prevent infection.

Clean and disinfect the farrowing areas before and after litters to prevent infection due to environmental bacteria.

On weaning day, sows can be given long-acting injections of penicillin, oxytetracycline or amoxycillin to prevent mastitis infection.  Veterinarians may prescribe oxytocin, penicillin and streptomycin, trimethoprim/sulpha, amoxycillin, framycetin, tylosin, enrofloxacin and ceftiofur.  They may also recommend injections of flunixin and doses of corticosteriods.

Sows that cannot get rid of mastitis (chronic sows) should be culled.

Porcine Parvovirus is a common cause of reproductive failure in gilts and sows.

This disease is caused by the parvovirus.

Porcine Parvovirus can be identified by reproductive failures.  Pigs with PPV appear to be healthy in all other aspects.  PPV causes increased return to estrus (failed pregnancy), decreased litter sizes, failure to farrow, decreased farrowing rate and mummified piglets.  Rarely, abortions will occur.

Parvovirus in other species creates diarrhea and is usually identified by the presence of diarrhea.  It does not cause diarrhea in pigs and should not be used as an indicating symptom.

Parvovirus in swine is transmitted through feces and bodily fluids.  An infected mother can also pass PPV to her unborn piglets through placenta fluids.

Studies have shown that PPV can also be transmitted through semen in natural breeding and artificial insemination. The virus has been found living within semen of infected boars.

The best way of disease prevention is cleanliness.  Don’t let your pigs be exposed to humid, wet or unsanitary living conditions.  These are prime environments for disease-causing organisms to thrive.  It is usually easier to sanitize and disinfect concrete. This is one of the reasons that I chose to raise my pigs on concrete.

Keep your pigs vaccinated for parvovirus and respiratory diseases to prevent them from becoming sick.  Monitor your pigs daily so that you understand their personalities.  Many diseases can be caught early by pigs appearing depressed or lethargic.

It’s also important that you keep good records of your pigs.  Pigs that are repeatedly sick or develop the same illness multiple times may need to be culled.

How to choose a boar for breeding

Have you had some of these common pig diseases in your herd?  How do you prevent disease?  Leave me a comment below and let me know!