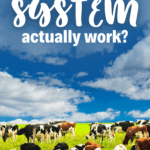 How does your cow’s stomach really work? How does a cow digest food?

Cows have four stomachs. Cows throw up their food and eat it again.  Wait.. what?  There are tons of rumors out there about how your cow’s stomach works.  It’s definitely different from how ours works, but it’s not that complicated and it’s not crazy.

And no, your cow doesn’t have four stomachs. 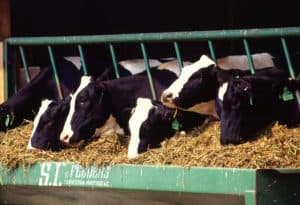 One of the most popular dairy breeds in the United States- the Holstein-Freisian, or Holstein for short.

Why do cows have four stomachs?

Cows are considered ruminants. Ruminants are animals that have a multi-compartment stomach.  They have one stomach with four compartments.

Not four stomachs.  You would not believe how many times I’ve heard that.

A ruminant’s digestive system works quite differently than ours.

Our stomach works by churning our food and mixing it with acid and bile to break down what we’ve eaten so that our body can absorb the nutrients. Our stomachs work in this way partially due to the wide variety of foods that we eat.  Cattle, however, only eat vegetation and their stomachs have become quite evolved to digest that vegetation.

The stomachs of cattle have four compartments-

When food enters the cow’s stomach, it enters the rumen first, then reticulum, then omasum, and lastly the abomasum before entering the intestines. Each compartment plays a different role in the digestion of the food that animal consumes.

Let’s walk through what happens to the food in each compartment of the stomach. 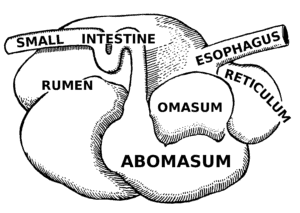 Food enters the stomach via the esophagus, goes into the rumen, then reticulum, then back into the mouth, down the esophagus and into the omasum and finally the abomasum before entering the intestines.

The Cow’s Stomach: Compartment 1- The Rumen

The first stop is the compartment called the rumen.

The rumen is unique because it acts like a giant holding tank that is filled with food and a large bacterial population.  The bacteria are there to break down a component of the plant called cellulose.  Cellulose, or more commonly called fiber, is something that cannot be broken down by most organisms except bacteria. (This is part of why fiber aids in digestive health.  You cannot digest it, so it helps move things along in your digestive tract.)

The Cow’s Stomach: Compartment 2- The Reticulum

The next stop is the reticulum.

The reticulum is unique as well.  This compartment allows the cow to regurgitate its food and chew it a second time. Before you get too grossed out, it probably isn’t as nasty as you are picturing. When you regurgitate food, the bad taste is due in large part to the large amount of stomach acid that is in the food you regurgitated.  The rumen and reticulum do not have acid in them, only bacteria, so again, it probably isn’t as bad to the cow as what you’re picturing.

If you watch cattle graze, you’ll notice they constantly take grass in and don’t stop to chew it like horses do.

They swallow the grass whole.  They do this until they have filled the rumen up.  Later, when some of the partially digested grass makes its way into the reticulum, they start regurgitating it and chewing it.

This is what is referred to as “chewing the cud”. Often, cattle will graze at the same time and become full at the same time.  They all get comfortable, lay around and begin chewing the grass they consumed. This chewing helps to break the food down into smaller pieces so that the omasum and abomasum can begin their part of digestion as well.

Many times cows will find a nice shady patch to chew the cud in.  Read about silvopasture to see how you can give your cow more shade to chew her cud without sacrificing pasture.

The Cow’s Stomach: Compartment 3- The Omasum

Once the cow has chewed the food again, the food is passed on to the omasum.  Water and some of the nutrients that have been broken down previously can begin to be absorbed in the omasum.

The omasum actually has so many folds inside of it that it is often compared to the leaves of the Bible.  If you were to open the omasum, you would see folds upon folds of thin tissue.  There are so many folds that the omasum is actually quite hard.

Food that needs further digestion moves onto the abomasum.

The Cow’s Stomach: Compartment 4- The Abomasum

The abomasum is considered the “true stomach” in ruminant animals.  This compartment works very similarly to how our stomachs work.

The stomach has a large amount of acid and bile that breaks down the food even further.  Some of the bacteria cells that broke down the cellulose in the rumen will make it to the abomasum.  Bacteria cells are broken down and digested as well here as well.

The abomasum, just like the omasum, is a site for some nutrient absorption.  Food that is left over will leave the abomasum and enter into the intestines.

Consider the difference between horse droppings and cow ‘patties’.  In horse manure, you can still see pieces of grass or particles of grain.  The manure has texture and pieces that can be seen with the naked eye.

When you compare this to cow manure, the difference is quite large.  There are no particles or pieces of grass leftover in the manure because they have been broken down to a much higher level than they would have been in the horse.

If you are interested in keeping a dairy cow on your farm, then look over my post about the dairy breeds of cattle. 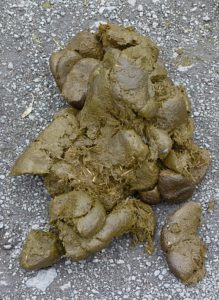 You can see leftover pieces of grass in the horse manure. 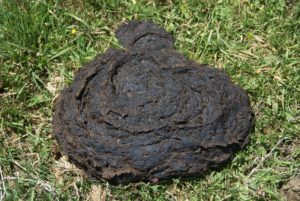 No pieces of grass here!

I hope this helps you understand how your cow’s digestive system works. So next time you see a herd of cows lying in a field, chewing their cud, you know what they are doing!

Now that you know how the cow’s digestive system works, what do you think?  How many times have you had to explain that a cow’s stomach is only ONE stomach? Let me know below!