I don’t know about ya’ll, but fall is my favorite time of the year. Hands down.  Well maybe except for Christmas.

But I love fall so much partly because it means Christmas isn’t too far away.  One of my favorite things about fall- making homemade crock pot apple butter!

Some of the flavors of fall are unbeatable.  There are so many fall recipes that have unmatched layers of flavor and warmth.

Last year, I tried making apple butter for the first time.  I’ve tweaked the recipe since then and I’ll say that I have perfected it.  This crockpot apple butter is insanely good and really easy.  The crockpot does the hard work for you!

Added bonus- this will make your house smell AMAZING.  Seriously.  There aren’t candles our oils out there that smell this good.

I bought some apple butter from a local farmer’s market not long after and it just wasn’t the same.  If you’ve never had Cracker Barrel apple butter, it’s a deep, deep red, almost brown in color.  It has a hint of cinnamon and a hint of acidity to it.  It’s sweet and dark and rich and OMG.  I literally made my mouth water.

The apple butter that I bought was basically apple jelly with the consistency similar to apple sauce.  No bueno.

This is when I decided to try making it myself.

I can jellies and tomatoes and such each summer, so I know the basics of canning and creating a jelly or food that will sit well in storage.  I felt confident that apple butter couldn’t be that difficult.

When I started looking at recipes for making apple butter, many of them recommended cooking down apples in the oven or on the stove for HOURS.  Who has time for that??

I thought I was going to be doomed to buying Cracker Barrel’s amazing (but pricey) apple butter for the rest of my life.  After doing a little more research and digging a little bit deeper, I came across a recipe that mentioned making apple butter in a crockpot.

I don’t know who thought of that first, but a huge shout-out to them.

They’re genius.  Not to mention the fact that using a crockpot uses less energy than traditional methods according to Penn State’s The Benefits of Slow Cooker Meals.  Win!

I looked at several crockpot apple butter recipes and wrote down what they all had in common.

Taking that information, I started playing with recipes and experimenting.

I use about 6 pounds of apples to make my apple butter.

I’m assuming this apple tree is something along the lines of a Baldwin, Idared or Wolf River variety.  These apples are green and red and not always a perfect apple shape.  They are sweeter than a green apple but not quite as sweet as a Red Delicious or Honeycrisp.

These apples are also a little smaller than store bought Red Delicious so I wouldn’t want to make an entire crockpot full of apple butter with them.  I would spend hours just cutting up the apples!

While I was researching recipes, I found that if you do it properly, apple butter does not need pectin.

Parts of the apple naturally contain pectin, so you can get enough pectin from your apples without needing to add any.  Pectin is the molecule that makes jellies and jams thicken.  Typically if you make jellies or jams you add this into the recipe in the form of Sure-Jell.

The parts of the apple that contain the most pectin includes the skin, the core, the seeds and the stems.

Now, I have read where people cut up entire apples, core, seeds and all and put them into their apple butter and cook it all down.  Then they go back and scoop out the seeds and any hard bits of core.

That sounds like way too much work to me.

When I am preparing my apples for my crockpot apple butter, I wash the outsides really good first. I do that because I leave the skins on them.  Most of the skin cooks down and is blended up at the end.

Remove any seeds, but  don’t cut out the hard core of the apple.  I do remove the stems and the bottom part of the apple where the blossom was.  Everything else stays so that I can get as much pectin out of the apple as possible. 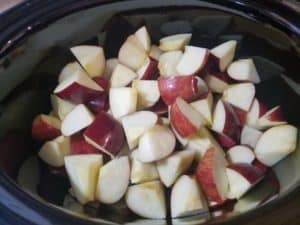 I’ve cut up the Red Delicious apples and put them all in the crockpot. 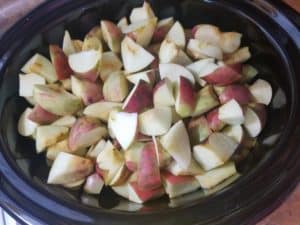 All of the apples are cut up into chunks and are in the crockpot.

For 6 pounds of apples, I add the juice from one large lemon.

I have used more than that in the past to help with the acidity and I got crockpot apple butter that had a slight lemon taste.  It was actually really good, it just wasn’t very traditional in flavor.  If you like lemon, you can try adding additional lemon to your crockpot apple butter. 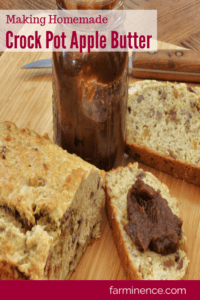 Once you’ve chopped up all of your apples, put them in the crockpot.

I like to go ahead and squeeze my lemon over the apples so that they don’t immediately start browning.

They will brown slightly as you cut them up and that’s ok.  Your crockpot apple butter will be a deep reddish brown when it is finished anyways.

Once the lemon is in, add the sugars and spices.  Just dump and sprinkle them on top of the cut up apples. 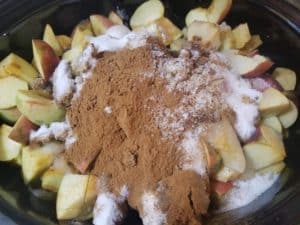 Then add the vinegar. Pour the vinegar on top of the sugars and spices to pull some of them to the bottom of the crockpot.  Give the apples a slight stir.

Don’t worry if you can’t stir it completely yet.

Your crockpot is probably extremely full.  The crockpot apple butter will cook down and you can give it a little stir after it has been in the cooker for a while.

Put the lid on the crockpot and turn it on high.  After it has been in the crockpot for a couple of hours, the apples will have started to cook down enough that you can stir them around pretty good.

All together, the apples can be in the crockpot on high for about 14 hours.

The amount of time that the apples will need is going to depend on the type of apples that you use.  I’ve had some apples that were done in as little as 10 hours.  Once the time starts getting close, just check on the apples every hour or so.

When the crockpot apple butter is finished cooking, it will be a deep rich color.  You’ll notice that the apples on the top will look dark brown, while the apples towards the bottom are lighter brown with a slight rusty red color. 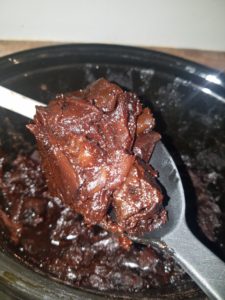 The apples should be a rich brown color when they are finished.

Scoop out the crockpot apple butter and put into a blender.

If you have an immersion blender, you could use that as well.  I don’t have one, so I use my regular blender. Don’t try to blend all of the apple butter at the same time.

The crockpot apple butter is pretty thick.  It doesn’t blend easily if you put it all in the blender at once.  I recommend blending two or three batches to make sure everything gets blended well.

If you want to can your crockpot apple butter, pack the hot freshly blended apple butter in to hot, clean jars.

Use a knife to run through the apple butter to get any air pockets out.

I recommend using a water bath to ensure a good seal on your crockpot apple butter.  This particular batch cooked down pretty low and I was able to get almost exactly two wide mouth pint jars.

This homemade crock pot apple butter makes excellent gifts, if you can share them, that is.  I usually have to make several batches of this in the fall so that I can give some away and still have enough for us.

Homemade crock pot apple butter is amazing on homemade biscuits, toast, English muffins or really any type of baked good.  Once you try it on a warm English muffin with butter, you won’t be able to stop.

Ok, time for me to go whip up some biscuits so that we can eat some of this apple butter!

What do you think about using your crockpot to make apple butter?  Have you tried this recipe yet?  Let me know what you think!