Do you know how to make dandelion salve?

Did you know that the pesky weed that can grant all of your childhood wishes can be used as an herb? It can!

Dandelions have been used and consumed as food and medicine for thousands of years.  Dandelion salve is only one of the numerous ways that you can put these plants to use. 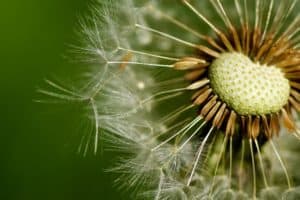 Dandelion salve can be used as a natural replacement for muscle relief creams.

If you have sore muscles or joints, dandelion salve can be used to relieve that pain.

I’ve used it multiple times for sore muscles and it works wonders. 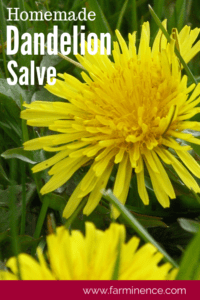 How to Make Dandelion Salve

I’ve had trouble with my rotator cuff in one of my shoulders and it helps to ease some of the pain in my shoulder.  It also smells wonderful compared to over-the-counter creams.

My yard has many types of grass (and probably weeds) growing in it.

I noticed this spring that there was an abundance of dandelions in my yard.  I knew that they held some medicinal value, so I decided to pick some and create a dandelion-infused oil.

There are many uses for dandelion oil, so I thought that would be the most versatile thing I could do with it. 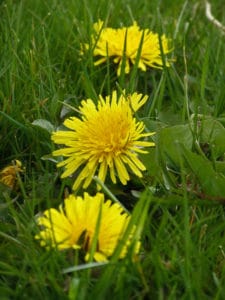 These little yellow blooms can be turned into a salve to soothe soreness and muscle aches.

I spent an hour one day with Dallas picking dandelions.  We collected about six cups of flowers.  Once we had them picked, I laid out paper towels on my table and spread the flowers on the paper towels.

I left them out like this overnight so that they could dry.

Dandelion flowers have a large amount of water in them, which is not needed to make the infused oil.

It’s best to use dandelions that are partially dried to make the oil.

Once the flowers sit overnight, place them in a container large enough to hold the flowers and oil.

You will be putting enough oil in the container to completely cover the flowers, so make sure that you have room.  The container also needs a top or a lid.  This will help to prevent anything from getting into your oil.

Place the dandelions in the container and cover it with the oil of your choice.

You can use almond oil, jojoba oil, olive oil, even vegetable oil.

Use the oil to completely cover the flowers.

Put the top on the container and put it in a dark place.  I put mine in the pantry so it would be out of the way.

The oil needs to sit with the dandelions in it for at least two weeks.

Don’t stir it, just let it sit.  You can add flowers if you want, but make sure they have at least two weeks for the oil to pull the chemicals out of the dandelions.

I used an old candle jar to store the dandelion salve in once I had it finished.

Step 2 of How to Make Dandelion Salve: Strain the Dandelion-Infused Oil

After two weeks you can remove the dandelions from the oil.

I used a small mesh strainer to scoop the dandelions out. 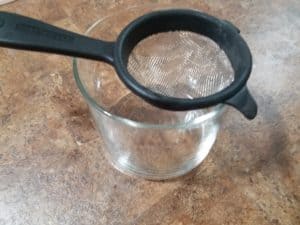 This small mesh strainer was a perfect size for straining the dandelions over the jar. 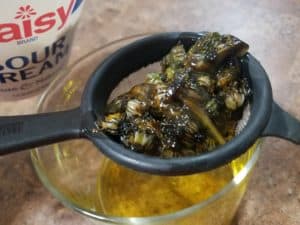 I started scooping the dandelions into the strainer by spoonfuls. 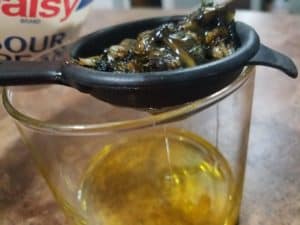 How to Make Dandelion Salve from the Oil

The dandelion oil was very fragrant and smelled sweet.

It was actually a little too sweet for my preference.

To cut the sweet smell a little, I added coconut oil.  The coconut oil would add a moisturizing quality to the salve. 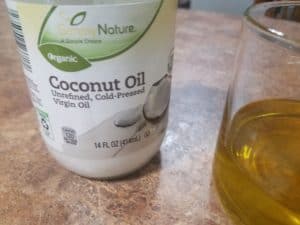 At first I thought that the coconut oil would be stiff enough at room temperature to keep the salve stiff.

I was wrong about that. 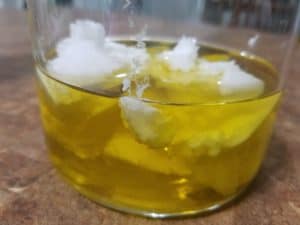 The coconut oil and dandelion oils before I heated them and mixed them.

I later added paraffin wax to the mix to stiffen it enough to keep it solid at room temperature.

You can also add beeswax chips to your oil mixture to make it stiffen better.  I plan on doing this with my next batch.

To mix everything together, I put the container in the microwave to melt the coconut oil.

I stirred the oils together once the coconut oil was melted.

The coconut oil and dandelion oil mixed up really easily.

The oils didn’t separate once they were mixed up. Once it was mixed up, I put the mix in the refrigerator to go ahead and stiffen it. 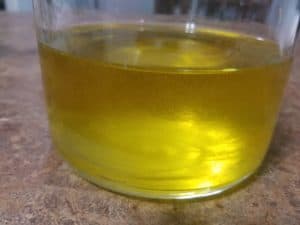 The two oils melted and mixed together. The oil is more opaque with the coconut oil added.

I ended up mixing about equal parts dandelion oil and coconut oil.

When I added the paraffin, I added about 1/3 of a cup.  I melted everything together again in the microwave.  Once it’s all melted, give it a good stir and let it thicken and set up.

After it sets up, it’s ready to be used!

Here’s what you’ll need to make your own dandelion salve at home:

I tried the dandelion salve out on myself once it was made.

Can I just say OMG this works wonders!

Not only does it smell a million times better than Icy-Hot, but it instantly gave me relief on my shoulder.

As I mentioned, I’ve had some trouble out of what I’m assuming is my rotator cuff.  When I over do it with my shoulder, this salve is the first thing that I grab.

Dandelion salve works quickly, which is perfect when I’m looking for pain relief.

It doesn’t just numb the pain, it actually helps it relax and feel better.  Plus, it’s all natural.  You don’t have to worry about what harmful chemicals you are applying to yourself.

Now that I’ve made this dandelion salve, I’ll be looking for more ways to use this awesome little flower.

Do you use dandelions?  If so, what are you doing with them?