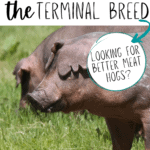 When most people think of pigs, they picture pink-skinned, white-haired pigs, usually lounging around in a pool of mud.  If you’re raising pigs for meat, you may know that these cute, idealistic pigs aren’t always the best choice for raising backyard pigs.

White-haired and pink-skinned pigs are very sensitive to the sun and can easily get sunburned.  That’s a major reason why most commercial pigs are raised indoors.

But, if you’re looking for a meat pig that you can raise in your backyard without the hassle of sunburn, the Duroc pig may be the breed for you.

These dark-colored pigs have been a favorite meat pig breed for generations.  Keep reading to learn more about this popular meat pig breed. 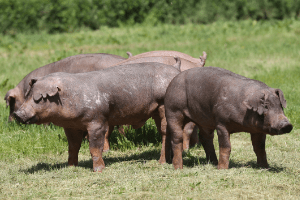 History and Origin of the Duroc Pig Breed

The Duroc breed was developed in the mid to late 1800s.  It all started in the early 1800s when red pigs were popular in the New York and New Jersey areas.  These ‘red hogs’ were very large, had large litters, and grew quickly.

These traits, still present in today’s Duroc, were popular with breeders.  These large red hogs could grow quickly with minimal feed and reproduce well; a family farm’s dream, right?

In 1823, Isaac Frink from Saratoga County in New York bought a red boar from a man named Harry Kelsey.  Harry had a famous trotting stallion that was named Duroc.  Isaac decided to name is new boar in honor of Harry’s stallion.

The boar, Duroc, passed on his deep red color, the ability for fast growth, large, muscular body, and calm personality down to his offspring.  The pigs that Duroc produced weren’t quite as large as the Red Durocs and Jersey Reds that were being raised at the time.

The calm personality and fast growth that Duroc passed on to his offspring quickly became sought-after traits.  Starting in the 1860s, farmers started to purposefully breed the large red hogs with the offspring of the boar Duroc.  This created a pig that wasn’t overly huge, grew quickly, and was easy to handle.

In 1883, a breed association was established to keep records of improving the breed.  This early breed organization was called the American Duroc-Jersey Association. It was also responsible for promoting the breed.  The breed and the association saw tremendous progress, with record-writing numbers recorded.

The Duroc breed was a treasure found in the Northeastern U.S. until the 1893 World’s Fair in Chicago.  During the hog show, Durocs were introduced to the world.  This sparked the beginning of the breed’s popularity.

After the World’s Fair, the breed became immensely popular.  In 1934, the United Duroc Swine Registry was developed, combining several Duroc breed organizations into one large organization.

As Americans moved out west, the Duroc pig followed.  A lot of the breed’s history occurred in Ohio, Kentucky, Illinois, Indiana, Iowa, and Nebraska.  The land in these states is well-suited to grow corn and is often dubbed the Corn Belt. Durocs grew easily on a corn-rich diet in these states.

Durocs today are extremely popular.  They are the world’s second-most recorded breed of pig.  This success is due to many factors:

The breed is often called the ‘terminal breed’.  A terminal pig is one that excels in producing meat.  The Duroc is one of the best breeds for producing quality meat.

Despite being called the terminal breed, Durocs are quite prolific and can have large litters.  Sows generally have few problems getting pregnant or farrowing, allowing the breed to reproduce quickly.

When farmers want to enhance the quality of meat, Durocs are often the breed of choice to use.

Durocs are easily identified with their red coloring and droopy ears.  Durocs can range in terms of the shade of red, ranging from a golden red to deep, rusty mahogany.  Durocs don’t have white points or dark points.

The ears are never erect but should flop down beside the face. 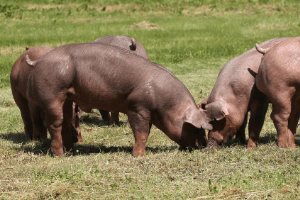 Duroc pigs will put on large amounts of lean muscle.  They are fairly long-bodied and have large hams and shoulders.

The face is slightly dished, giving them a very domestic appearance.

How much does a Duroc pig weigh?

Durocs are moderately sized pigs when compared to the large red hogs that influenced the breed’s early origin.  Today’s Durocs weigh anywhere from 500-750 pounds or 220-340 kilograms.

That sounds large, but the breed is very calm and easy to work with, making their large size seem smaller.

One of the sows that we had for several years was a large Duroc that weighed about 650 pounds.  She was very calm and at the time, was one of my kids’ favorite animals.  I don’t know how many times I found my kids playing on and around her.  It always scared me at first, simply because of how large she was and how small my kids were (2 and 6) at the time, but she never even stepped on one of them.

What breed of pig is the biggest?

The Duroc is not the largest breed of pig.  The record for the largest pig belongs to a pig named Big Bill.  Big Bill was a Poland-China pig that weighed in at an incredible 2,552 pounds.  He measured 9 feet long from the tip of his nose to his hind end.

Compared to this, the Duroc’s 500-750 pound weight seems like peanuts.

Another commonly large pig breed is the Giant Forest hog.

Are Duroc pigs good for meat?

Yes, Durocs are considered one of the best breeds for meat, especially if you’re looking for a breed that puts large amounts of lean muscle on quickly.

Duroc hogs are known for their excellent carcass quality.  Their ability to put high-quality muscle on quickly is part of what has made the breed so successful.

They’re also well suited for a range of environments.  Durocs can do equally well being raised in a commercial-style barn or in your backyard.

There are many pros to raising Durocs, with not many cons.  This breed is very easy to raise and excels in many conditions.

Let’s start by talking about color.  If you’re interested in raising pigs, one of the first things that you need to consider is the color of the pig and where you’ll be raising them.  Many breeds have pink skin, making them susceptible to sunburn.

Durocs do well both indoors and outdoors.  If you have a barn for them, they’ll do well inside.  But, if you don’t have a barn, they’ll do just fine in a pasture also.

Some breeds of pigs do best in certain climates.  Durocs excel in both warm and cool climates.  They’ve been successfully raised in both conditions. 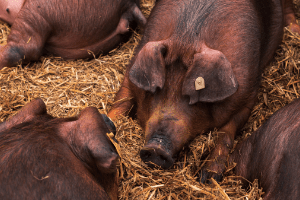 Many large pigs can be excitable, making them dangerous.  Even an accidental stepping-on from a 700-pound pig can be dangerous.  Durocs are not excitable and instead are very calm and quiet.  Most of the time they prefer to just lay around as you do what you need to do.

They’re also quite conscious of themselves, despite their large size.  It’s a common problem with pigs that sows will lay on their piglets and crush them (most piglets weigh <3 pounds at birth).  Duroc sows are very good at taking care of their piglets and not laying on them, even though they are some of the larger pigs.

What is the Duroc pig known for?

Durocs are used to improve many commercial herds.  The breed is very well-rounded and can bring many positive traits to the table.

Where can I buy a Duroc pig?

Duroc pigs are the second most popular breed of pigs in the world, making it very easy to find them.  There are a number of places that you can find Duroc pigs. 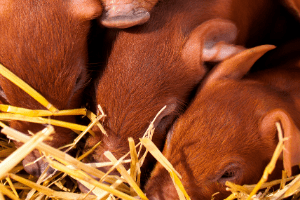 Another great place to look is with local 4-H and FFA groups.  Many kids that raise show pigs only use them for one season of shows and then they sell them.  You can find well taken care of, high-quality pigs this way.

Check your local feed store bulletin boards.  Durocs are a very popular breed to raise, so there may be breeders close to you that you weren’t aware of.

How much does a Duroc pig cost?

Expect to pay anywhere from $50- several hundred for a Duroc.  The price will vary based on the pig’s age and quality.  Show quality pigs can be several hundred dollars, while farm-quality pigs will be much cheaper.  The younger that you can purchase the pig, the cheaper it will be as well.

Final Thoughts About the Duroc Pig

Duroc pigs are a solid choice of pig for nearly every situation.  If you want to raise pigs in your backyard for meat or if you want to raise them to sell, they’re going to perform well.  They are a moderately sized breed that can reach 750 pounds.

Don’t let the large size intimidate you though; these pigs are very calm and easy to work with.

Durocs have a high feed efficiency, meaning you can grow them quickly with minimal feed.  The less money that you have to spend feeding them, the more money in your pocket, which is always a good thing.

They’re also well-suited to being raised in different climates.  They can be raised indoors or outside.  Their dark skin helps to protect them from sunburn.  Durocs are quite hardy and do well in both warm and cold climates.

If you’re looking for an easy-keeping, prolific breed, the Duroc just might be your hog.

Do you raise Duroc pigs? What’s your favorite Duroc pig trait? Let me know below!