FAMACHA scoring is used for detecting the level of a parasite load in sheep and goats.

Parasites in Goats and Sheep

Small ruminants such as sheep and goats are highly susceptible to internal parasite overloads.  One of the main culprits is the barber pole worm.

The barber pole worm is the most economically important parasite that affects sheep and goats. 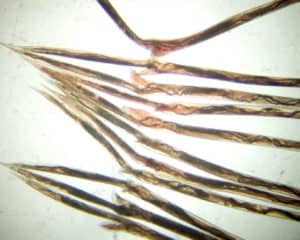 The worm gets its name from its striped appearance. It’s an internal parasite that lives in the tissue of the stomach.  The worm has a small ‘tooth’ that it uses to cut the lining of the stomach.  It then feeds on the blood that is released.

The barber pole worm can quickly cause anemia in goats and sheep.  Unfortunately, this is common, especially in the summer months when they are grazing on pasture.

Since the barber pole worm causes anemia, you can check the sheep or goats for signs of anemia.

One of the easiest ways to do this is to check the membranes of the eyelids.  FAMACHA scoring compares the eyelids to a chart to show you if the animal is anemic of not.

What is FAMACHA scoring?

FAMACHA scoring is used to detect anemia in goats or sheep that is caused by the barber pole worm.

A FAMACHA score is given to an animal on a scale of 1-5.  The lower the score, the less anemic the animal is, which means they have a lower parasite load.

A FAMACHA scoring card is used to give a FAMACHA score.  Don’t attempt to score animals by memory, as a minor misscore can quickly turn into a serious problem.

To use the FAMACHA scoring system, you’ll need a scoring card and a helping hand, holding stand or small squeeze chute.

The proper way to check the eye membrane can be remembered as COVER, PUSH, PULL and POP.

Cover the eye with the top eyelid.

Push onto the eyeball with just enough pressure that the eyelashes of the top eyelid start to curl back over your finger.

Once you can see the membrane, quickly compare the pinkest part of the membrane to the FAMACHA card.  It’s important that you do this quickly.  If you take too long, the eyelid will start to dry out and that will cause the membranes to turn red.

Go with your first impression and move on to the next animal.

What do the FAMACHA scores mean?

You’ll notice that the FAMACHA scores range from 1-5.  The lower the number, the less anemic the animal is.  This generally means that they have a lower barber pole worm problem.

A goat or a sheep that has a score of 1 or 2 is healthy and doesn’t need to be wormed now.  Their membranes are nice and healthy looking.

A goat or a sheep with a score of a 4 or 5 needs to be treated immediately.    If they aren’t treated immediately, they could die.  In fact, many producers that don’t check their animals for anemia find that their death rate can be pretty high during the warmer months when the barber pole worm is most prevalent. 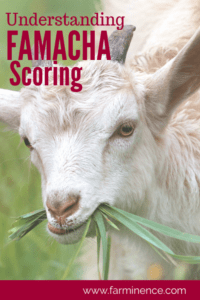 It’s up to you to decide what to do with an animal that has a score of a 3.  If you have several animals that are a 3, you could worm them all before the problem gets worse.

Treatment and Prevention of Internal Parasites

You may think that it’s easier to just skip FAMACHA scoring and just err on the side of caution and worm your entire herd of flock.

Worming with chemicals should be your last resort to treating internal parasites in your herd, even barber pole worms.

FAMACHA scoring was created by goat producers in South Africa that had noticed they were worming their goats frequently and the worms were becoming more and more prevalent in their herds.

The worms were becoming resistant to the medications that the producers were pumping into their goat herds.  Once the worms became resistant, the producers couldn’t get rid of them and they were losing goats because of it.

You should think of internal parasites the same way that doctors think about bacteria.  If you give someone medication when they don’t really need it, then you create populations of bacteria (or worms) that become resistant and can still survive despite the medication.

Barber pole worms infestations are most common in the summer months when goats or sheep are grazing on pasture.  This is especially true on pastures that are eaten pretty low.

In rotational grazing systems, animals are moved from pasture to pasture.  This prevents animals from eating grass down extremely low.

Internal parasites are spread when the worms lay eggs in the digestive tract of the animal.  The eggs come out with the feces and get onto the grass.  The eggs hatch and larvae live on the blades of grass.

Most internal parasite larvae prefer the warm, moist environment of the blades of grass closer to the ground.  They can’t handle the heat of the part of the grass that is 6″ or so from the ground.

By moving the animals around to new pastures more frequently you lower their risk of ingesting the larvae that are at the bottom of the grasses.

Co-grazing animals is an excellent way to reduce the amount of internal parasites in your herds.

Basically, the two species work to worm each other.

I’ve heard so many times that sheep won’t graze where cows have grazed or that goats won’t eat where horses have been.

This may have to do with the fact that goats are more browsers than grazers and cows are grazers.  It’s just an old rumor and is not true.  In fact, putting them on the same pasture is quite healthy for both the animals and the pasture grasses.

A high FAMACHA score (4 or 5) means you need to treat them quick.

You don’t have to call your vet to treat a high parasite load, you just need to worm them.  You can purchase sheep and goat wormers over the counter at most feed stores or co-ops.  If you have sheep or goats, I would highly recommend always having wormer that is effective on barber pole worms in your barn all of the time.

Barber pole worms can cause anemia quickly and your goat or sheep may not show symptoms as soon as you’d like, so it’s best to be prepared.

For those of you that own goats and sheep, FAMACHA scoring should not be optional.  You should plan on doing this several times a year.

Try to prevent internal parasite by using methods that don’t require medication to prevent from creating medication-resistant populations of worms.  Nobody needs that!

Have you used FAMACHA scoring before?  What do you think about worming animals that are a 3? Do you automatically worm animals that are new to your herd or do you test them first? Let me know!