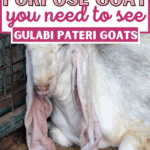 What is a Gulabi Pateri goat?

Are you looking for a unique goat breed to bring to your farm?  Do you want to wow your neighbors and family members with a unique goat?  (If you’re looking to really wow people, you can check out the Ayam Cemani chicken breed also.)

The Gulabi Pateri is a goat breed that will draw tons of attention.  Their long ears and white coloring make them easy to identify.

Is the Gulabi goat right for you?  Keep reading to see if this long-eared goat breed is the one for you.

History and Origins of the Gulabi Goat

The Gulabi Pateri goat is a popular goat breed in the Middle East.  They are popular goats in Pakistan and India, where goats are commonly raised for both meat and milk.  Here in the U.S., they are being raised as a unique breed that makes a strong dual-purpose goat that is also suitable for keeping as cool pets.

The Gulabi goat is a breed that results from crossing four different breeds together.  The four breeds that are crossed include the Beetal, the Rajhanpuri, the Pateri, and the Kamori.  The Beetal and Rajhanpuri are primary crosses used in creating the Gulbai goat.  This means that they have the most influence on the Gulabi breed. 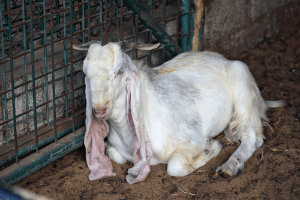 The Pateri and Kamori breeds are secondary breeds in developing the Gulabi goat.

Interestingly, all of the breeds used to produce the Gulabi are dual-purpose breeds.  Each individual breed is a breed that is commonly used as both a meat and a milk breed.

Let’s dive a little deeper into the breeds used to create the Gulabi breed.

The Beetal is the main meat goat breed in Pakistan.  It’s a large, heavy-bodied goat that also produces a good quantity of milk, making it a very good all-around breed of goat.

Beetal goats are large-bodied.  They have long legs with a compact upper body.  They come in many colors and are often multicolored.  Beetal goats have long, drooping ears.

Rajhanpuri goats have white hair with pink skin.  They also have white hooves. The skin is very loose and creates multiple wrinkles.

The ears are long and droopy.  Rajhanpuri goats are polled, meaning they don’t have horns.

The Pateri goat breed is used to influence the Gulabi breed, but it’s one of the minor influences in the breed.

Pateri goats are very heavy-bodied goats that are used primarily as large meat goats.  They do produce good milk though and are often kept as a dual-purpose goat breed.

Pateri goats are mainly white in color.  They have reddish-brown on their head and neck, similar to the red coloring seen on the Boer goat breed.

The ears are long, droopy, and very wide.  Their skin is also droopy and creates wrinkles.

Pateri goats do have horns.

The other secondary breed to influence the Gulabi is the Kamori goat.

The Kamori goat is used primarily as a dairy goat, but their large framed body means that they are also used frequently as a meat animal.  This dual-purpose breed is very distinct.  They are large-bodied, but often have a lanky appearance due to their long legs.

Kamori goats are a deep brown, almost black color with coffee-colored patches all over them.

Kamori goats have long droopy ears and do not have horns.

Gulabi goats are large-bodied goats.  They are uniquely all white in color with pink skin.  In fact, the word ‘Gulabi’ actually means pink.  The white hair with underlying pink skin gives the breed a soft pink appearance.

Even the toes and horns are white in color.  A sign that a Gulabi is pure can be seen by looking at the tail.  The tail should have white hair with pink skin.  The skin of an impure Gulabi goat is often dark in color around the tail, even if the hair is white.

The tissue of the inside of the mouth should also be pink.  Dark spots are indications that the breed isn’t pure.

The Gulabi breed has a pronounced Roman nose.  This means that the bone between the nostrils and the center of the forehead bulges outward rather than concaving inwards.   The ears are very long and wide. 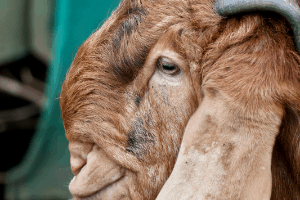 A prime example of a Roman nose.

Why are Gulabi goat ears so long?

This is a very common question when people look at the Gulabi.

Gulabi ears can hang well past the point of the shoulder and often have a rippled appearance because they are so wide.

The breed tends to develop wrinkles under the chin due to excess skin.

There’s actually a good reason for the excess skin and long ears.

Gulabi goats are prized dairy animals.  Their large body size also means that they can produce quite a bit of meat, so they are often raised as a dual-purpose breed.

The Gulabi breed is very friendly and they make wonderful pets.  The combination of their friendly personality and usefulness is part of the reason that they are gaining in popularity in the U.S.  Gulabi Pateri goats are a good fit for the modern homestead or small farm.

Petting zoos that have Gulabi goats mention frequently that they are a favorite with customers.  Customers love the large, gentle goats with the ‘big floppy ears’.

There isn’t much difference in raising Gulabi goats than there is with other large goat breeds.  These goats thrive in hot and dry climates, so you may need to make some changes to their environment.

They need a large shelter that will allow them to escape the wet and cooler weather.  The inside of the shelter needs to be dry and warm all of the time.  Make sure that the floor is dry, even during heavy periods of rain, to help reduce problems with hoof rot.

Fences should be sturdy enough to withstand their heavyweight pushing on them.  Goat fencing and electrical wire are the best options.

Gulabi goats do have horns.  You’ll want to avoid livestock or field fencing that has larger holes.  These larger holes are big enough for the goat to get their head through, but they often catch the horns, leaving the goat’s head trapped.

You can avoid sunburn by making sure that they have some shade or a shelter to escape the sun.

As a general rule, you should be FAMACHA scoring your goats frequently to check for the presence of anemia and internal worms.

Also, make sure that your goats are getting adequate nutrition.  Goats are browsers.  This means that they consume the leaves and stems of broadleaf plants like shrubs and bushes.  Goats cannot remain healthy if they are eating mainly grains.

Make sure that goats are getting the majority of their diet from browse, hay, or pasture. 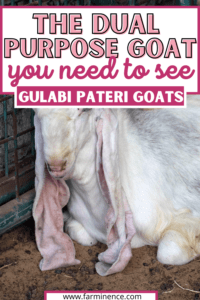 Gulabi goats are fairly easy to breed.  The males are very prolific and one male can breed as many as 25-30 females.  If you’re not interested in having that many does, that’s OK, too.  The males are also content with just a few females.

Gulabi goats are valuable goats, so breeding them can be a profitable venture.

As with any other breeds, make sure that your breeding animals are in excellent condition.  Breeding animals should be healthy before breeding.  Gulabi goats can have between 1-4 kids at a time.

Are you thinking about buying Gulabi goats?  This breed is fairly uncommon in the U.S., but don’t let that prevent you from getting Gulabis.  They are increasing in popularity every day in the U.S.

Remember, these are very productive goats that have unique looks and a friendly personality.  Who wouldn’t want to raise that type of goat?

How much do Gulabi Pateri goats cost?

On average, you can expect to spend around $700 for a pure Gulabi goat.  If you compare that to other registered goat breeds in the U.S., that’s a pretty fair price.  You just may have to look a little bit harder to find them.

Are Gulabi Goats Right For You?

If you’re looking for a unique breed that is extremely useful, then the Gulabi may be a great fit for you.

You can find breeders and more information on the American Goat Federation website.

Do you raise Gulabi Pateri goats at home? What do you like about Gulabi goats? Let me know below!