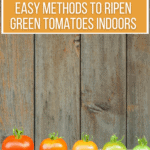 Growing tomatoes at home is one of my favorite hobbies and one that many gardeners quickly take up.  There’s really nothing quite like a home-grown tomato!

A common (but good) problem that many gardeners find themselves facing is that they are growing more tomatoes than they can handle.  Your tomato plants may bend over backward, literally, because of the number of tomatoes that they are producing. 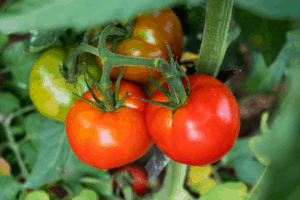 So, what’s a gardener to do?  You could use these methods of using up your tomatoes, but what if that still isn’t enough to relieve your plants of the heavy tomato loads?

If you’re not a fried green tomato person… you can pluck extra tomatoes off and ripen them inside.

Will tomatoes ripen if picked green?

It’s a really common misconception that tomatoes can only ripen on the vine.  Did you know that?

It’s true!  In fact, one of the biggest marketing schemes out there when it comes to fresh produce is the idea of tomatoes ‘on the vine’.  In fact, a tomato grower came up with the idea when trying to decide how he could sell more of his tomatoes than other tomato growers.

You see, selling tomatoes is a very hot market and can be pretty competitive.

He decided that he would try to sell his tomatoes while they were still attached to the vine.  His thoughts- Harvest the entire vine at once, reducing labor costs of picking the tomatoes.  Then, sell the tomato for more money because of the simple, natural appearance of the tomato.

The idea was a hit and quickly spread. Now, tomatoes on the vine are one of the most profitable types of tomatoes, bringing in up to 3x as much as their vineless counterparts, with fewer expenses attached!

Since tomatoes on the vine are so popular, many people that buy tomatoes think that the only way to get a ripe tomato is to keep it on the vine.

That’s not true at all! 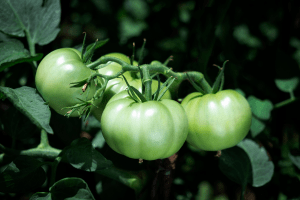 Once a tomato is mature, it will ripen and turn red whether it’s still attached to the plant or has been removed.

With that being said, people with sensitive palates may be able to taste the difference between a tomato that is ripened on the vine versus one that was ripened off of the vine.  For the majority of us, they’ll taste just as good no matter where they are ripened.

There is a combination of factors that work together to ripen your tomatoes.

To start ripening the tomato, the plant releases a gas called ethylene.  It’s the same gas that greenhouses and large grocery stores will use to ripen a bunch of produce at the same time. That sounds bad when you hear it, but keep in mind that ethylene is a naturally occurring gas that plants make to ripen fruit.

Ethylene gas is produced by tomatoes, apples, bananas, and other ripening fruits.  Ever heard the phrase ‘one bad apple will ruin the bunch’? That’s because as apples (and other fruits) ripen and continue to get overripe, they continue to produce ethylene gas.

The ethylene gas will spread to nearby fruit and will cause them to overripen also.

Ethylene gas is a major factor in ripening tomatoes, but it’s not the only factor.

The ambient temperature also plays a factor in how fast tomatoes ripen.  Tomatoes grow the best in very warm temperatures.

Do tomatoes need the sun to ripen?

The sun plays a very small role in ripening tomatoes. If you watch tomatoes ripening in the field, on the vine, you’ll notice that most tomatoes will actually start ripening on the side that is facing away from the sun.

How do you turn green tomatoes red?

There are a few proven ways that you can turn green tomatoes red.  I mentioned that greenhouses and large grocery stores will use ethylene gas to ripen their tomatoes.  You can use the same concept to ripen your tomatoes at home, without having to spray them down with gas.

Remember, ethylene gas is one of the drivers for ripening tomatoes, but it’s not the only driver.  With that being said, many ripening fruits produce ethylene gas.  A ripe banana, apple, or another ripe tomato will release ethylene gas, which you can use to help ripen green tomatoes.

Ripen Green Tomatoes in a Paper Bag or Cardboard Box

You can ripen tomatoes in a paper bag or cardboard box.

Cover the tomatoes loosely with a sheet of newspaper.

Check the tomatoes daily and remove tomatoes that are ripe.  Placing the ripe tomatoes in the refrigerator will slow down the process of ripening.

I’ve found that the flat Amazon boxes work really well for ripening tomatoes.  They’re thin enough that they don’t take up much room but they’re still deep enough to hold a layer of tomatoes.

If you want to speed up the ripening process, use a ripe apple, banana, or tomato and place it into the box with the ripening fruits.  The already ripe fruit will kickstart the ethylene production in the ripening tomatoes.  Don’t leave the ripe fruit in the box or bag for more than a day or two or it will start to break down and turn into a mess.

Ripening Green Tomatoes in a Plastic Bag or Glass Jar

You can do the same thing using a plastic bag or glass jar. The jar or bag works to keep the ethylene gas concentrated around the tomatoes, causing them to ripen faster.

There is a downfall to this process though. A glass jar or plastic bag won’t breathe as much as a paper bag or cardboard box.  This can create moist air that is perfect for growing mold.

As soon as you notice a ripened tomato, remove it to prevent overripening and mold.

This is the method that my mom (and her mom) used religiously to ripen her tomatoes. Line the tomatoes up in a south-facing window that gets sunlight.

In my house, that’s my kitchen window. It’s above my kitchen sink, making it the perfect place for ripening tomatoes to hang out. I’ll be honest with you here. I’ve ripened tomatoes in a box, in bags, etc.

I can’t tell you how many times that’s happened to me.

When I have tomatoes on the windowsill, I see them almost constantly, so it’s really hard to forget about them. I know I mentioned that ripening tomatoes in sunlight can cause thicker skin, but I haven’t found that to be an issue.

My tomatoes ripened in the windowsill are just as good as ones ripened with other methods.

One more thing- your windowsill can only hold so many tomatoes. Don’t be tempted to stack them on top of one another. This almost always causes mushy spots.  If this happens, simply cut the bad part off and use that tomato up ASAP.

Do you remember seeing all of the infomercials for those topsy turvy grow bags about ten years ago?  They were the gardening rage when they came out.  They made all sorts of promises.  Some of them were based on real science, some were simply marketing ploys.

Just in case you don’t remember or you missed it, here’s a small clip of it:

What’s interesting about these upside-down tomato grow bags is that they were efficient and allowed people to grow tomatoes when they otherwise couldn’t.  If you only had a patio and limited space, a topsy turvy grow bag would allow you to still grow tomatoes without giving up precious patio space.

At the end of the growing season, you can flip your tomato plants upside down to ripen the last few tomatoes. This comes in handy when you know your tomato plants aren’t going to live much longer (i.e. when a hard frost is coming your way).

You can dig the plant up and hang it upside down in your garage.  The plant will die back, but the tomatoes still attached will ripen up.  This provides a flavor that is almost as good as tomatoes that were ripened completely on the plant.

Why won’t my tomatoes ripen?

Have you tried ripening your tomatoes inside but they’re still staying green?  If that’s you, there could be a couple of things going on.

First of all, double-check that your tomato is actually supposed to turn red when it’s fully ripe.  There are many types of tomatoes out there and not all of them are red when they are ripe.  Some tomatoes are purple, orange, yellow, pink, or even green when they’re fully ripe. 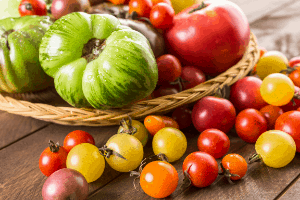 It could be that you’re growing tomatoes that aren’t supposed to be completely red. Make sure that’s not the case first.

Once you know what color your tomatoes should be when they’re ripe, make sure that you aren’t picking them too soon.

Only mature tomatoes will ripen.  If you pluck one that wasn’t mature yet, it won’t ripen.  There are two ways that you can determine whether your tomatoes are ready to be picked (even if they are still green).

I always allow a few tomatoes from each plant to ripen on the plant.  This gives me an idea of how large the tomatoes should be before they start ripening. Again, there are many types of tomatoes, all with different shapes and sizes.

It can be hard to determine what a ‘mature’ tomato looks like, especially if the seed packet tells you how large the fruits are in ounces and you’re in the garden, nowhere near a food scale…  So, let a few tomatoes ripen on the vine to see how big the tomatoes should get before you pull green ones off.

Another thing that you can do is to wait until the tomatoes are just starting to change color.  Pull them off and bring them inside to finish ripening.

Tomatoes don’t have to be on the vine or plant to ripen.  If tomatoes are mature, they will ripen just as well indoors.  Expect tomatoes to take anywhere from a few days to a month to ripen.

The warmer the temperature is, the faster the tomatoes will ripen.

You can coax green tomatoes into ripening faster by putting them in a paper bag, plastic bag, cardboard box or glass jar. Check them daily and remove them as soon as they are ripe.

If you think you’ll forget to check on your ripening tomatoes, consider letting them ripen in your windowsill.

Tomatoes that won’t ripen, even after weeks of waiting, may have been picked off of the plant before they were mature.

How do you ripen green tomatoes? Let me know below!