In this article, I want to share with you how I managed to triple our garden yields, virtually eliminate bugs and use no chemicals in my garden. And guess what?  It was extremely simple! Keep reading to see why I’m a huge fan of plasticulture!

Last year, I was planning what we would plant in our garden.  This was our first year to plant a garden at our new home, and I really wanted it to be the best garden we had planted yet.  I was inspired to look through research that was done by several agricultural colleges and I stumbled upon an article that mentioned row croppers covering the soil with plastic mulch to increase yields and eliminate pests.

This practice is known as plasticulture.  To see the kind of results you can expect, read what my garden looked like just three weeks into the growing season.

How in the world does this work?

You lay the plastic down over the soil where you will plant.  Once you have the plastic laid down you use landscaping pins to stake it down and hold it tight.  You can cover rows or your entire garden.  I prefer to cover my entire garden so that I don’t have to worry about fighting weeds.

Plasticulture methods can also be used in flowerbeds, around perennials such as fruit trees, chrysanthemums, hostas or many other plants that you landscape with. 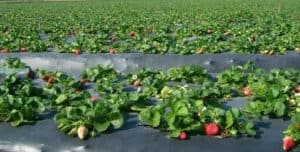 Strawberry plants that are grown under plastic mulch.

The first benefit that the research pointed to was the elimination of garden pests.  This caught my eye my because I’m not a fan of bugs.  I’m usually tempted to give up a tomato plant if it gets tomato worms on it.

The elimination of bugs with the plastic happens because of two different reasons.  First of all, the plastic absorbs heat more than the ground around the plant.  Believe it or not, many pests are deterred by this added heat.  One exception is spiders.

Spiders didn’t seem to mind the heat from the plastic, which was ok. They ran away from me and they kill bad bugs.  I can handle spiders.  To read more about preventing pests and plant illnesses, check out my article about plant illnesses and how to prepare for them.

The other reason pests are deterred is due to the added light.  Normally, sunlight hits the plant from the top.  Many pests are irritated by this but they have an easy solution.  They simply hide on the underside of the leaf if the light is too intense.  Most sunlight that reaches the ground is absorbed.

When plastic mulch is used, rather than being absorbed by the ground, the sunlight that reaches the ground is reflected.  It is reflected enough to irritate any pests that thought they could hide under the leaves.  Now, they have no escape from the intense light, so they leave to find an easier garden to attack.

I was hooked when I read that this could eliminate bugs in my garden, so I wanted to read more about how plastic mulch could increase my garden yields.

I couldn’t understand how something that could potentially block water from getting to my plants would benefit them, so I read on.  As I read, I found there were several ways that plants benefit from the plastic.

You probably know that before you can plant your garden, the ground temperature needs to be warm enough for your plants to grow.  I mentioned earlier that plastic mulch would heat up and deter pests.  It also heats up to act like a warming blanket above the ground.

This means that not only will your ground be warmer for faster plant growth, but you can plant your garden faster.  We planted ours in the last two weeks of March last year, when usually we have to wait until April to plant.

Soil that is covered with black plastic is going to be on average 10-15 degrees warmer than soil that is not covered.  That’s a big difference! 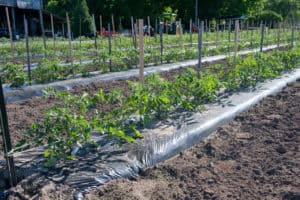 Another benefit of using plastic mulch is the increased amount of carbon dioxide that plants take in.

This funneling of carbon dioxide is called the ‘chimney effect’.

Yet another benefit of plastic mulch is it aids in soil moisture conservation.

Plants need adequate moisture in the soil to grow, especially plants that are producing fruits or vegetables.  The plastic prevents the water in the soil from evaporating.

In the past, we have had times when we had to water our garden every day and still fought dry soil.  With the plastic mulch, we watered the garden about 10 times total from March-October.  Even though the plastic mulch holds moisture in the soil, the plants are less likely to suffer from drowning as the water during rain or a watering can easily roll off of the plastic.

Read more about taking care of your soil here…

A huge plus to plastic mulching is eliminating competition from weeds.

Oh, and the fact that I don’t have to spend most of my gardening time pulling weeds is awesome.  That is one of the chores that I dread.  I really don’t like pulling weeds.  Almost as much as I don’t like bugs in my garden!

Plant growth can only occur through the incisions in the plastic, so weeds have a hard time taking root.  The only places that I had weeds pop up last year where around the plants that we cut a circle in the plastic rather than an X.  Even then, the weeds were minimal and so few that it was no big deal to pull them.

No weeds means that your plants get all of the nutrients out of the soil and aren’t competing for them.

Overall, it was well work the extra expense and work to use the black plastic.

We spent about $70 on plastic, but the plastic is supposed to be good for ten years.  I think I can improve on how our plastic is laid, so we will probably replace it this year and try a different lay out.  Either way, I feel like the $70 investment was well worth it.  We were able to get rid of the pests, used less water, no chemicals and had an extremely easy to maintain garden that produced a huge yield of crops for us.

Not only that, but we were able to harvest sooner in the year and longer in the year also. I was able to pick tomatoes from April until the middle of November!

What do you think about plasticulture? Let me know! 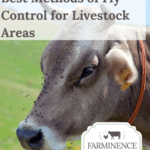 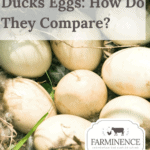 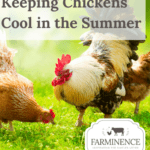 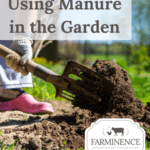 Best Manure for Your Garden 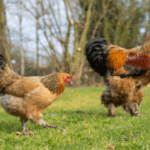 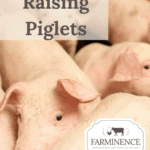