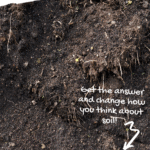 Is soil living? Is soil abiotic or biotic?

This blog post is going to soil more like a biology lesson than anything else, but that’s ok!  In case you didn’t know, I was a high school teacher for several years before I ‘retired’ early and started Farminence.  When I was teaching, I taught agriculture classes (think animal science, plant science, greenhouse management, etc.) and honors-level biology.

I’m a nerd when it comes to all things agriculture and I really enjoy understanding why things work the way that they do.  Like ‘why are my tomato leaves turning yellow‘.  Not just how to fix it, but why is that a problem in the first place? 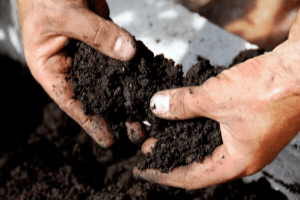 Those are the two most common questions that I get when it comes to soil.  Here recently though, I’ve seen the question ‘is soil living?’ pretty frequently.

And honestly, ya’ll…. this gets the ag. nerd in me going!

So, let’s talk about soil!

What is soil made of?

To really understand soil, we need to start with the basics.  What is soil made of?

Roughly equal parts of sand, silt, and clay create loamy soil.  Loamy soil is ideal for growing many types of crops, holds nutrients and water well, and remains loose and fluffy.  It’s the perfect soil if you’re trying to grow a home garden.

The soil particles themselves are not living.  Sand, silt, and clay are naturally occurring abiotic (or nonliving) factors.  They’re similar to minerals.  They aren’t man-made nor are they made from things that are living or used to be living.

Is soil abiotic or biotic?

This is where it gets tricky.

When you’re talking about the soil particles themselves (sand, silt, and clay), the soil is not living. It’s abiotic.  So, if you’re reading this and doing biology homework… then the soil is most likely abiotic.

However, if you’re talking about the soil in reference to the soil particles, nutrients, water, and the microorganisms that live in the soil… Well. That may be a different story…

For those of us not currently in a biology class, let’s take a quick refresher.

Abiotic means that something in the environment is not living.  These are examples of abiotic factors: rocks, water, sunlight, minerals in the soil, etc.

Biotic (kinda sounds like biology, right?) means that something is living.  Think about these: trees, a snake, deer, flowers, etc.

This is especially true when we’re talking about soil because unless we dig into it, everything in the soil is something that we can’t see.

This way of thinking meant that farmers and gardeners watered the soil when it was dry and added fertilizer to feed the plants.

It wasn’t until a couple of decades ago that soil scientists started to realize that there was so much more going on in the soil than just nutrients and water.  They discovered that there was an entire ecosystem in the soil.

In fact, in healthy garden soil, there could be thousands of living things in just one square foot! 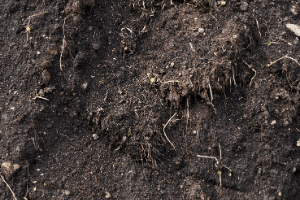 Why does this matter?

Let’s think about food chains and ecosystems.  Yes, I know that I’m bringing up science lessons that you probably really wanted to forget about.

In a food web, different organisms rely on each other for food.  The snake eats the mouse, the hawk eats the snake, etc.  There are similar relationships that happen within the soil, right around the roots of your plants.

There are many microorganisms that live around your plants’ roots that have symbiotic, or beneficial relationships with your plants.  One example of such an organism is mycorrhizae.

What is mycorrhizae and why is it important?

Mycorrhizae is a fungus that lives in the soil around the roots of plants.  It’s important because it

has a beneficial, or symbiotic, relationship with plants. Mycorrhizae is made up of a mycelium that looks very similar to the roots of plants.

The roots of plants are thick in diameter, the mycelium of mycorrhizae is thin.  The mycorrhizae attach and grow along the roots of the plant.  You may think that this would prevent the plant from being able to absorb nutrients and water from the soil. 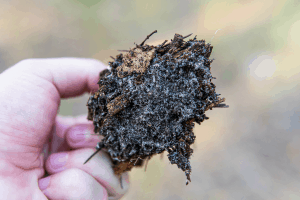 You can see white mycelium in this clump of soil.

The mycorrhizae actually have the opposite effect.  The thin diameter of the fungus allows it to have a much larger surface area within the soil than the plant’s roots.  It can spread out further than the roots and absorb more nutrients.  The mycorrhizae doesn’t make its own food, so it can pas

s most of the nutrients on to the plant.

In exchange, the plant gives the mycorrhizae sugars.

This relationship is very important when it comes to plant nutrition.  Plants need specific nutrients that only the mycorrhizae can absorb and send to the roots.  This is especially true when it comes to phosphorus.

Many plants that have phosphorus deficiencies lack the symbiotic mycorrhizal relationship.

Living Things in the Soil

If you’ve been gardening long, then you probably know that earthworms are a sign that your garden soil is healthy.  Earthwroms are beneficial insects that can help your plants to flourish. Earthwowrms will break down organic matter in the soil into nutrients that the (mycorrhizae) and the plant can use.

Earthworms also tunnel through the soil, creating small pockets of air that can hold air or water.  These tunnels also help to loosen the soil, making it easier for plant roots to grow.

Nitrogen-fixing bacteria are also extremely important organisms that live in the soil.

There are many forms of nitrogen that exist naturally.  Nitrogen is a major nutrient that plants need in large amounts.

However, not all forms of nitrogen are ones that plants can use.  Nitrogen-fixing bacteria turn unusable nitrogen in forms of nitrogen that the plant can actually use.  I’m sure you can figure out why these bacteria are useful to have in the soil!

Changing How We Think About Soil

Mycorrhizae is just one example of how plants need microorganisms in the soil.

You could essentially dump phosphorus to a plant and it wouldn’t be able to absorb it or use it properly without the mycorrhizae.  It’s important that we consider soil and the living things that are within it.

For decades this was ignored and soil has been degraded in gardens across the nation.  There is more to soil than just the nutrient profile or how well it holds water. Microorganisms make nutrients and other resources available to the plant.

Without those microorganisms, plants wouldn’t be able to thrive. 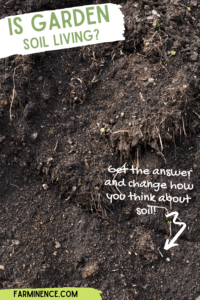 It’s important to understand that plants rely on more than just nutrients and water from the soil.  The plants needs to have pockets of air, pockets of water, available nutrients, and microorganisms that can help them to utilize the nutrients properly.

Plants also need the soil to be loose and fluffy so that root growth isn’t restricted.  There’s a lot more going on in the soil than you may realize!

Don’t think of your garden soil as a sponge that simply holds nutrients and water for your plants. Instead, think of it as a living, breathing ecosystem that will help your plants to be healthier.

Remember, the soil itself isn’t living, but everything in and around it is!

If you want to create healthy ‘living’ soil, without spending a ton of money on fertilizer, watch the video below.

Do you consider your garden soil living or not? Let me know below!