Interested in the benefits of oregano for chickens? You’re in the right spot!

Raising healthy backyard chickens is usually pretty straight forward.  Feed them properly, provide them plenty of fresh water and most of the time, they will take care of themselves.

Occasionally, chickens will get sick and show symptoms of being ill.

But, once chickens reach the stage of being sick where they show symptoms, they are really sick.  A lot of time, your chickens may be sick and you won’t even know it unless it gets really bad.

One of the best ways that you can make sure that your chickens remain healthy is to prevent them from getting sick in the first place.  An ounce of prevention is worth a pound of cure.

Its usually cheaper to keep your chickens from getting sick than it is to heal them once they are sick.

There are many health benefits to oregano for chickens and other poultry. 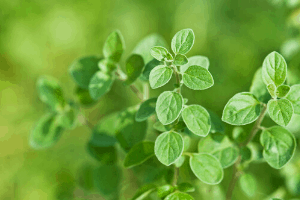 Is oregano good for chickens?

Oregano is a powerful preventative that can be fed to chickens.  It has antibiotic and anti-inflammatory properties.

Similar studies have suggested that oregano may improve feed intake, the growth rate of broilers and overall body condition in meat carcasses.

A natural antibiotic for chickens, turkeys and ducks

Many studies have suggested that oregano is an excellent natural replacement for antibiotics.

The push for more natural products has helped led the way in research for more holistic cures.  There is also a growing concern over ‘superbugs’.  Superbugs are bacteria that can mutate and become resistant to antibiotics.

Oregano is known to fight off bacteria that frequently make poultry sick.  It can be used against E. coli, Salmonella, Avian flu and even infectious bronchitis.

It’s so effective that some commercial producers are turning to oregano to prevent illness and ditching medicated feed.  Companies like Bell & Evans and Perdue have been feeding oregano to their chickens for years now in place of antibiotic feed.

There are many benefits to feeding oregano to chickens and other poultry.  Oregano contains the phytochemical carvacrol.

I was lucky enough to speak to some representatives from Perdue Farms about their experiences with using oregano with their birds.

Perdue is one of the first poultry companies to raise meat birds free of antibiotics.  They have been using oregano and thyme for about five years, so they have plenty of experience that they were willing to share.

Both oregano and thyme contain the beneficial carvacrol compound.

Perdue Farms explored many natural products that could increase the intestinal health of their birds.  Thyme and oregano were two of the products that they use.  Thyme is used more in the feed while oregano is used in the drinking water. 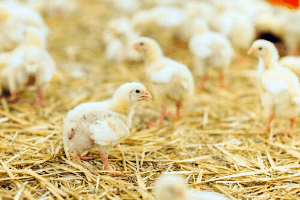 Using oregano and thyme has allowed farms like Perdue to continue to produce healthy meat birds without the use of antibiotics.  Of course, other care is essential to maintaining healthy birds.  Keeping coops clean, providing chickens with fresh food and water along with preventative care is essential to keeping all chickens and turkeys healthy and happy.

It’s also interesting to note that one of the unexpected (but pleasant) benefits of providing oregano to the chicken water at Perdue Farms was the smell.  Chicken housing often has a distinct odor, especially when there are a bunch of chickens in one place.  Oregano is a very aromatic herb and helps create a pleasant odor in the coop.

What does oregano do for chickens?

There are many ways that oregano can benefit chickens and turkeys.  When we discuss the benefits of oregano, it’s important to understand that much of the benefits actually come from the chemical compound carvacrol that is found in the oregano.

Carvacrol is also found in other  plants such as thyme, pepperwort, wild bergamot, black cumin and savory.  Oregano and thyme are safe ways to provide your chickens with carvacrol.

But what does carvacrol actually do for chickens and turkeys?

There is a ton of research available that indicates the many benefits of feeding oregano and other carvacrol-containing compounds.

Oregano is a powerful antimicrobial that can fight off many types of bacteria such as:

Chickens and turkeys are subject to infections from E. coli and salmonella.  These can also be passed on to people, which should be a concern to people raising both meat and egg chickens or turkeys.

Feeding oregano can help to reduce the chances that your chickens will get sick or give you something that could make you sick.

How do you give oregano to chickens?

There are a few ways that you can provide oregano to your chickens.

You can provide oregano essential oil, which has the highest concentrations of carvacrol.  You can also feed your chickens fresh herbs as a tasty treat.  Dried herbs can be fed during the colder months when fresh oregano is harder to grow. 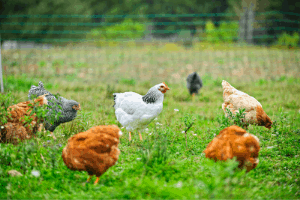 Oregano essential oil is one of the easiest ways to give the benefits of oregano to your chickens.

Oregano oil also has the highest concentration of the chemical carvacrol.  Using oregano oil can ensure that your chickens get enough carvacrol to make a positive impact.

Since oregano essential oil is more potent than feeding fresh or dried oregano, you won’t have to use as much oil as you would have to feed the fresh plant.

One small bottle of oregano oil will last you quite a long time with your chickens or turkeys.

The method that you use to give it to them will determine how much oil you’ll use.

If you are putting oregano into chicken water, then you’ll want to put about one drop per gallon in the waterer.

You can also spritz oregano oil over feed.  To do this, soak a toothpick in the oregano oil.  Remove it and place it in a water bottle filled with water.  Gently shake it up and spritz very lightly over feed.

Don’t soak the feed or you could create moldy feed.  The goal is to just introduce a small amount of the diluted oil onto the feed.

You don’t have to spray the feed with the oil mixture every day, but once a week should do the trick.

A word of caution- too much oregano oil added to the water will alter the taste of the water and cause chickens not to drink.

If you have fresh oregano, you can create a ‘tea’ for your chickens.  Put oregano in a glass jar or heat-proof container.  Boil water on the stove.  Once it’s at a rolling boil, carefully pour the hot water over the oregano.

Let the water steep over the leaves until the water has cooled.  You can give it to your chickens warm in the winter, or add ice and give it to them cool during the hot summer months.

Oregano tea is a great way to help a sick chicken.  A chicken that is sick will often quit eating but will continue drinking.

Oregano tea can help them get over an illness by fighting off what’s making them sick.  It has has some vitamins and nutritional value to keep them going until they start eating again. 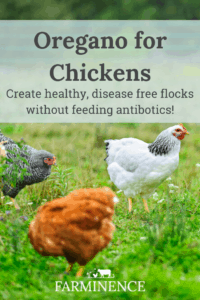 Chickens can and will eat fresh oregano.  Most culinary herbs are safe for chickens to consume.

You might be surprised to learn that not only can they eat fresh herbs, but they enjoy eating them.  Chickens tend to eat what’s good for them, including herbs.

It’s a good idea to consider growing oregano for your chickens.  You can grow oregano easily in a small herb garden or a container. 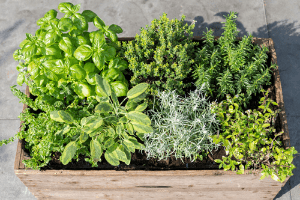 Oregano, like most other herbs, are hardy and easy to grow.

You can grow oregano next to your chicken coop.  If you want them to be able to access it on their own, place the plants just outside of the run so that the chickens can eat some of the leaves without killing the entire plant.

You can also grow oregano indoors all year long.  Growing oregano and other herbs in containers will give you an endless supply of fresh herbs.  You’ll be able to grow oregano cheaper than you can buy it at the grocery store or a farmer’s market.

There are many herbs that are beneficial to chickens.  Herbs that contain the phytochemicals carvacrol and thymol are especially good choices for chickens.

Herbs like thyme, rosemary, sage, lavender, mint, oregano, basil, lemongrass, parsley, garlic and dill can all be fed to chickens.

Which herbs you should feed your chickens depends on what you want to accomplish.

Herbs such as mint and lavender are calming and make great additions to the nesting box.  Herbs that are aromatic, like mint, lemongrass, garlic and rosemary will help to keep bugs and pests away.

There are many reasons to feed oregano and other herbs to your chickens.

Oregano contains a powerful phytochemical called carvacrol that can boost the health and productivity of both meat and egg chickens.

If you’re raising chickens and want to raise them without antibiotics, supplement their feed and water with oregano to keep them healthy without the antibiotics.

You can give your chickens oregano essential oil, which has the strongest concentration of carvacrol.  You can also feed chickens fresh oregano or dried oregano.  Oregano leaves can be brewed into a tea for chickens.

Raising chickens without antibiotics can be done and is much simpler when you replace the antibiotics with natural ones like oregano and thyme.

Oregano also has benefits when fed to ducks and turkeys.

Check out these products to take care of your chickens without antibiotics:

How do you give oregano to chickens?  Do you feed your chickens herbs?  Let me know below!

My name is Shelby DeVore and I'm the creator of Farminence. I love being outside, working with animals, gardening and cooking up a good meal from scratch. Contact me if you have any questions!

Looking for something specific?

This error message is only visible to WordPress admins


Error: API requests are being delayed for this account. New posts will not be retrieved.

Make sure this account has posts available on instagram.com.