I’ve owned pigs for a large part of my life.  I’ve opted to keep my pigs on concrete, which is what many large commercial hog farmers do.  I’m not a commercial farmer by any means, but they’ve gotten the system figured out.

I’ve seen that there is a growing trend lately for pasture-kept pigs.  That’s awesome! I love the idea of keeping pigs on pasture and raising them naturally.  It’s so cute to see momma sows and a litter of pigs out on a lush green pasture rooting around. 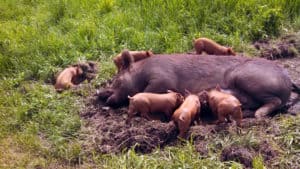 I just don’t think it’s totally feasible for everyone that want pigs.  I certainly haven’t had any luck with raising pasture pigs, even though I think it’s a great idea!

So, why did I decide to keep my pigs on concrete?

I always had pigs growing up.  There were two places where the pigs were kept.  When my parents first got pigs, the neighbors next to them had a large fenced in area, probably a little over an acre next to my parent’s house.  They didn’t keep anything in it and it had previously been used for pigs.

I got out there with my parents one day and helped them fix it up and clean it out.  It was pretty clean except for a few briar patches and some small scrubby trees that needed to be cut down.  After we cleaned it up, they put a few pigs in it.

The pigs they got were commercial Yorkshires and were fed corn and hog grower every day.  They definitely weren’t hurting for food. Once each of the pigs weighed about 100 pounds, they began ripping through the fence.  Awesome right?

They were just big enough at that point that you couldn’t quite pick them up and carry them back to the pasture.  They had to be led back.

That worked for a while…

Until they figured out that we were leading back to the pen that they had just escaped from.  The pen that they were enclosed in was fenced with the 2″ x 4″ square welded wire fencing.  That is definitely not durable enough to keep pigs in that want out.

Eventually, they broke out enough times that the fence around the small pasture was unfixable.

We took two of them to the slaughterhouse and the last one stayed at the house for a while to reach market size.  We live in a neighborhood that is mostly elderly people, and it’s in the middle of nowhere, so when cars drive by, they drive by slowly.

The pig that we kept for a while longer would get out of her pen and sleep in the carport with the dogs and cats.  If a car went by…. she chased it…. like a dog.

Yes, you read that right.

Picture a 200+ lb hog chasing cars down the road in front of my parents house.

She even barked at them like a dog.  I can’t tell you the number of times people would drive past my parent’s house just to see the “pig that chased cars”.  If that’s not country, I don’t know what is.

So fast forward about ten years to me having my own pigs.

My husband’s family raises pigs and cooks whole hogs each year.  One of the uncles in the family raises the pigs on his farm.  He kept them on concrete and rather than having fencing around the pen, he used sheets of tin roofing.

He claims that if the pigs cannot see out of the pen then they won’t try to get out.  We decided to try something similar at our old house and made a small pen using tin sheets rather than fencing.  We didn’t have concrete though, so the pigs were on the ground.

First mistake we made was having the pig pen on a slope with the tin sheets.

The tin sheets touched the ground.  Remember, he said it would work because they can’t see out.  So we closed all of the gaps and had the tin on the ground.

When it rained hard, the pig pen turned into a huge soup pit.  Not cool.  Since it was on a slope, one end would fill up with water and it held the water pretty well, so the rest of the pen would flood also.

We only raised a couple of pigs in that pen.  That was a headache.  I could see it working well with concrete and having a slight gap for the water to drain under and around the tin sheets but it reminded me of a prison.  Who wants to be kept in a box with nothing to look at?

We had to change something.

When we moved to our current house, we knew that we wanted pigs again.  I actually bought Lucille and her brother before our pen was ready. (Not that I would recommend that!)

Raise It, Eat It, Kill It makes some good points about the advantages and disadvantages about raising pigs on concrete, pasture and dirt areas.

So we had to keep the two baby pigs in a livestock trailer briefly until we figured out what we wanted in our pig pen. This was probably the best thing that happened to us.

When we kept the pigs in the trailer, they were on a wooden slat floor that we kept covered in shavings.  I cleaned the trailer out several times a week, and about once a week I completely hosed it out and put new shavings down.

You can scoop manure off of dry ground pretty easily, but it gets a little more complicated trying to scoop it off of sloppy mud.

The Pig Site also discusses several types of flooring options with pigs that are kept indoors.  This is a great read if you are trying to determine pros and cons of different flooring options.

I decided I wanted to put my pigs on concrete.

I would easily clean it up, hose the manure off and I could also disinfect it if I needed to.

We made a pen with hog panels.  This is really one of the few things that is going to keep your animals in if they want out.  Lucille currently weighs about 425 pounds and she can push on the panels and they don’t break.  I highly recommend them!

You can buy hog panels at co-ops or TSC stores.  I’ve seen a lot of used hog panels on Craigslist before too so that would be a good place to look.

After the panels were up, we poured our concrete slab.  Before the slab was poured, the pen would get so thick with mud that the pigs would have a hard time moving around.  In the spring when we got a lot of rain, it was so sloppy and nasty that you almost couldn’t tell manure from mud.  Not an ideal situation to say the least.

Our final design that we decided on was to pour a concrete slab, fenced in with hog panels.  We would also make a house on one end of the pen for shade in the summer and heat in the winter.

When we poured the slab, the pigs went back onto the livestock trailer for several days while the concrete cured.  Once we turned them back out into the pen, it was evident very quickly that they loved it.  Pigs are clean animals by nature, so they quickly established a bathroom corner, a bedding area, and a feeding area.

Lucille now has a house on one end of the pen that provides her with extra shade and a fan in the summer as well as heat in the winter.  We keep that side full of shavings for her to bed into.  One thing that I’ve noticed, when it is hot outside, she will move the shavings out of her way under her house to lay directly on the cool concrete.

Since it is concrete and not dirt, in the summer when it is extremely hot we will turn the sprinkler on in her pen to help her cool off.  I don’t have to worry about creating a muddy mess with the sprinkler since she is on concrete.

It is also really nice to be on concrete when I need to get in the pen and work with Lucille.  When I perform AI on her, I don’t have to worry about walking through the mud and muck with expensive supplies in my hands. Read more here about performing artificial insemination on pigs. 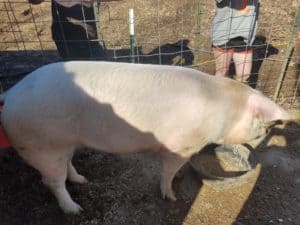 Lucille chowing down on supper in her pen. Notice the concrete she’s on. It was time to clean it, so it’s a little dirty, but nothing a water hose can’t handle!

I have loved putting our pigs on concrete.

Eventually, we may expand our pig area to include an optional pasture area, but for now what we have works great.  As long as you monitor your animals’ health and condition, I think keeping them on concrete is a beneficial management strategy.

Overall, it has made managing our pigs sooo much simpler.

I later found this article from The Pig Site that talks more about the importance of keeping show-pigs on concrete on the farm.

Just like everything else, if you do it improperly, it could have negative impacts, such as your pigs developing leg or feet issues.  This can also be prevented by giving them deep bedding and selecting animals that have correct leg and feet structure.

Something else that I’ve been working on lately is working on better managing our pig’s manure.  There are so many different ways that pig manure can be managed.  When you raise pigs on concrete then it’s easier to manage the manure.

It also sets you up to manage pregnant sows also.  We have enclosed part of our pig pen so that farrowing mommas have a sheltered place to have piglets.

What do you think about keeping your pigs on concrete or pasture?  Let me know!