Are you interested in planting red potatoes?  Or planting potatoes in general?

One of the most essential skills you need as a farmer or homesteader is growing plants for food.  Over the years, I’ve gotten pretty good at growing vegetable and fruit crops.  One thing that I have not tried previously was growing potatoes.  Until now.  This article explains to you how we planted our first potato crop.  Hopefully in a few months I’ll be able to tell you about all of the loads of potatoes we harvested! 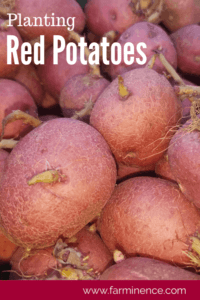 Potatoes are known for being a fairly easy crop to plant and produce large yields.  I haven’t tried planting potatoes before, so this was new for me.

A few weeks ago, we were walking around First Monday.  First Monday is a large outdoor flea market that is held once a month in Ripley, MS.  It’s a great place to go and find homesteading or farming tools, plants, crops, antiques and small animals.  As we walked past a large stand with fruit and vegetables, I noticed that there were several small baskets of baby red potatoes that had started to sprout.

They wanted $1 a basket for the small seed potatoes!  I had three one dollar bills, so I got three baskets full of seed potatoes.  When I got home and counted them, I had 126 seed potatoes.  And they had all sprouted, all for $3. 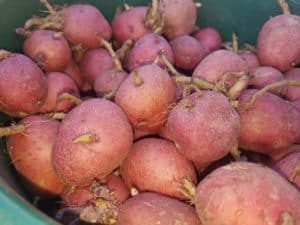 These seed potatoes are sprouting like crazy!  Quite a steal for $3!

As I haven’t planted potatoes before, I read up on it.  Turns out there are a million ways to grow potatoes.  Who knew??

If you want to grow and harvest potatoes the old fashioned way, Almanac.com has an article about planting, growing and harvesting potatoes just like your grandma used to do.

So I started looking in to planting red potatoes in the ground.

I found that potatoes need to be spaced roughly a foot apart in every direction, covered with at least one inch of soil, and then mulched quite frequently as the vines grow.  Once the vines stop growing and die, the potatoes can be harvested.

I decided to plant the potatoes in the garden in an area that we tried to grow watermelons in.  Last year, we had the largest, prettiest watermelon vines that were covered in tiny watermelons.  As soon as they had softball sized melons on them, the deer found them and at the melons and vines in two days.  I was so disappointed.  So I decided I would try to plant the potatoes there.  Maybe the deer won’t like potato plants as much as watermelon plants.

To buy seed potatoes to start planting your own potatoes, click here.

I tilled my garden up my entire garden and started working on planting red potatoes.  I had a little help from Forrest and Dallas, which was nice.  We got the potatoes planted and mulched in about 30 minutes.

Once the area was tilled, I used my boot and made trenches that the potatoes would be planted in. 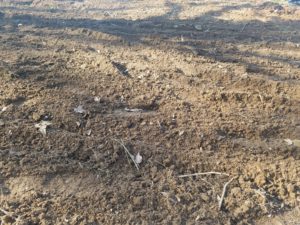 Freshly tilled soil where the potatoes will be planted. 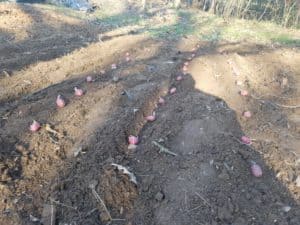 Potatoes in the trenches that we made. Pretend they are in perfectly straight lines. Haha! 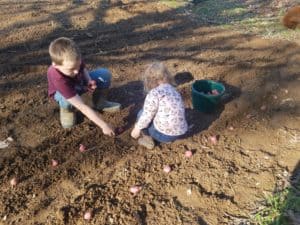 Planting goes much faster when you have help!

Potatoes need to be mulched frequently. People use many different types of mulch to cover their potatoes.  I typically have pine shavings on hand because I get them free from a friend at one of our local sawmills.  I used several bags of pine shavings to mulch my potato plants since we had some that had gotten wet. Better to use them as mulch than throw them out! 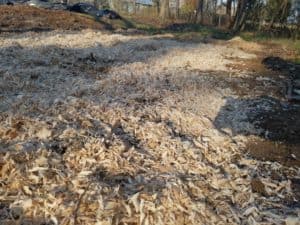 First few bags of pine shavings down for mulch over the potato trenches.

We covered the entire potato area with the shavings, and laid it down pretty thick.  The shavings ended up being about eight inches thick.  I read that this not only helps the potatoes from greening (which makes them poisonous), but it also chokes out any weeds that might grow.  Plus, once you’re ready to harvest, you aren’t digging through a ton of soil, but rather just raking back mulch. 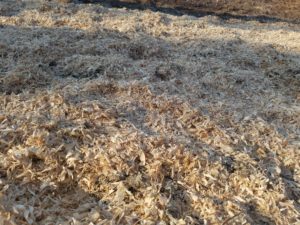 The pine shavings were laid down pretty heavily to completely cover the trenches and the spaces between the trenches.

Planting red potatoes isn’t complicated, especially when you have help!

So that’s how I got my first potato crop into the ground!  I tilled, dug trenches, put potatoes in trenches and then covered them up with soil and shavings.  Hopefully I’ll be able to come back and brag about the huge potato harvest in a few months that these potatoes are going to give us.

How do you grow potatoes?  Do you have a favorite variety to plant?  Do you plant in containers?  Let me know!