If you don’t already raise meat chickens at home, you should.  After raising meat chickens at home I am convinced that this is the way to go.  Meat birds that are raised at home are free of hormones, additives and have a better quality of life than those that you would purchase in a grocery store.

A couple of years ago, I purchased some meat chickens to raise at home.  This was my first attempt at raising meat birds at home.

Overall, I’d say it was well worth it.  I did learn a lot though that I wish I would have known some of this ahead of time.  Learn what I did wrong so that you don’t make the same mistakes that I did!

Chickens had to be easy… right?

Ha! I thought that raising and harvesting meat chickens would be easy.

Before I get too far, I will say that I would do it again 100 times.  It’s not difficult really, especially if you learn from my mistakes. I plan on getting meat chickens again this year to harvest. Chicken that is raised at home can’t be beaten.

We’ve ordered chicks before from different companies that ship chicks in the mail.  I’ve always been impressed with Murray McMurray and Cackle Hatchery.  I also order chicks frequently from Hoover’s Hatchery.

They mail you day-old chicks and usually send extra chicks in case some of them don’t make it the whole trip.  They have high-quality birds, which is excellent if you’re looking for purebred birds.

We bought five Jumbo Cornish Cross chicks.  I thought five would be a good small number to try it out, figure our costs and try our hand at processing them.

The first thing that I noticed was that the meat chicks were big. Maybe I should have known beforehand that they would be bigger, as they were jumbo.  We ordered a white turkey with the chicks that we got, and our turkey actually looked similar to the meat chicks at a glance.  They were roughly the same size. 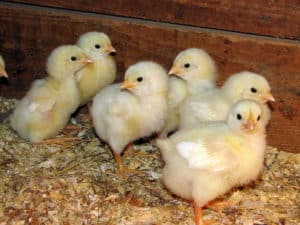 Keep in mind that these chicks were all the same age- about a day old.  So it’s not like the meat chickens had that much time to outgrow the egg chicks.  They were just big.

These chickens produced more manure than normal chickens due to both their size and the amount of feed that they went through each day.  Click here to see how I recycle my chicken manure each year. 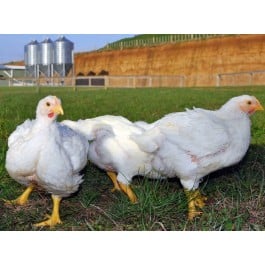 At the time, we only had one small coop and most of our bigger chickens were free-range. I had read not to let meat chickens be free-range, as they will use a lot of the energy you feed them while they are moving around and it is best to keep them confined.

I never really saw anything that specified how to keep them confined, other than what large poultry corporations do.  We only had five chicks, so we didn’t need all of the fancy stuff that the large corporations need.  Wire cages it was.

The wire cages worked fine, for a while.  And for a while, I mean a few weeks… like 2 or 3 max.  These are meat chickens, which reach harvest size in 6-8 weeks.

Pretty soon, the chickens outgrew the wire cages, so we had to get larger wire cages.  Another mistake.  Not only did we pay the extra money for two sets of cages, but they outgrew the second cages about a week before they were ready to be harvested.

We purchased chicken wire and will be making custom meat chicken pens for the next time we raise meat chickens. Update- Don’t use chicken wire to build chicken enclosures.  It doesn’t hold up well and raccoons will literally tear through it.  Instead, use a welded wire with small 1″ x 2″ holes.

Meat chickens grow extremely fast so they can be pretty lazy. Their bodies use most of the energy they consume into growing quickly.

When we let our chickens out, the meat chickens never really went anywhere. They would get out of the cage and literally lay down beside it.  Because they laid so frequently, two of them rubbed the feathers off of their breasts.

When we harvested them, the skin where the feathers had rubbed off was pretty tough.  I’m thinking next time for their comfort, they need to be bedded deeper in straw or shavings.  Another update-  raising Cornish crosses alongside Rangers in a free-ranged setting seems to work better. The Rangers help the Cornish crosses to be more active, preventing problems like this one.

Before we harvested our chickens, I read everything I could get my hands on that would tell me the easiest, cleanest, most humane way to harvest and process them.  I read that some people will use a milk jug with the bottom cut out and nailed to a tree as a holder to contain the birds upside down so that they can be bled out.  This worked fantastically and I really recommend it.

Chickens need to be processed outside if possible for the sake of not getting feathers all in the house.  Well…. we harvested our chickens in the summer. It wasn’t too difficult actually,  Forrest helped me with it.

I used old milk jugs nailed to a tree to put the chickens in to bleed them out.  That worked perfectly. The milk jug is the perfect size and shape to hold the chicken.  You cut the bottom off of the jug and nail it to the tree upside down.

The chicken’s head goes through the top hole of the jug. Pretty ingenious idea really.

Since I have harvested our chickens, I have found these metal chicken processing cones.  You could easily sanitize these.  I tore our milk jugs down after we used them the one time because they wouldn’t hold up to me sanitizing them multiple times.

As I said, it was the middle of summer and about ninety degrees when we harvested our chickens. So, once they were all ready to be plucked, we carried them inside.  I had a huge stockpot filled with hot water that I used as a scalding tank.  We started plucking in the house.  Even though the feathers were wet and ended up stuck to everything, they came off like butter.

I found a drill attachment that has rubber fingers on it that will pluck the birds for you.  I’ve used something similar when we process pigs to remove the hair.  If you scalded the birds first and put the carcass in a large bucket and used the chicken plucker you wouldn’t even need to get feathers on your hands.

I think I cleaned feathers from those five birds for like a week in my house.  And the hot water/chicken carcass/feather mess didn’t make my house smell like roses either.

It would have also been helpful to have a vacuum sealer to package the meat in.  We didn’t and packaged the meat in freezer paper and ziploc bags.  It worked well enough at the time.  The meat was eaten before it was freezer burned, but we also only processed a handful of birds.  If we harvest 50 or so birds, vacuum sealing will be a must to keep the meat fresh in the freezer.

So definitely grab a fish cooker and do your scalding and plucking outside.  You’ll thank me later.

I think in the future we will set up an assembly line of sorts outside and complete everything outside.

Is Raising Meat Chickens for You?

If you’re considering the pros and cons of raising meat chickens, I would first recommend that you make sure that you can legally raise chickens.  Many cities consider meat chickens to be livestock and have certain zoning regulations regarding them.

Extension.com has a really great article about things you should consider when thinking about raising meat chickens.

How do you raise and process meat birds? Do you have any tips or tricks to share? Let me know!