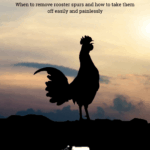 Removing rooster spurs is something that I get asked about.  If you have chickens and a rooster, odds are that you’ve noticed those long spurs on your rooster’s leg.

I’ve been asked about rooster spurs and if they are something that can be trimmed.  I’m going to break down how you can remove rooster spurs to keep you, your hens and your rooster safe.

What are rooster spurs?

Rooster spurs are a natural thing on a rooster, and even some types of exotic hens.  When you look at a rooster, pay attention to the insides of his legs.  You will notice a pointy, bony looking growth.

Spurs grow on the inner leg, an inch or two above the back claw.  They will start to be noticeable as early as three months of age.  This is pretty early though.  Most roosters will start to have noticeable spurs when they are around eight months old. 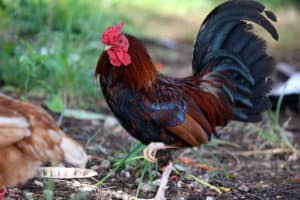 You can see the small upturned spur on the leg of this rooster. You can’t see the spur on the foot that is held up.

Rooster spurs are created from a bony growth that is covered in keratin.

When chickens hatch, there is a small dot noticeable on the leg.  The small dot is known as a spur bud.  The spur bud is what eventually grows into a spur.

The spur is part of the leg bone.  The bone underneath the spur bud starts to elongate and eventually develops into a spur.

Spurs are covered in keratin.  Keratin is the same protein that makes up your hair and fingernails.  There isn’t feeling in it.

If you’re interested in the science behind rooster spurs, check out Poultry Help’s article about rooster spurs.

Spurs are used by roosters as a method of defense.

If you have a flock of chickens, you may have noticed that your rooster is on guard most of the time.  Roosters will look out for their hens and try to prevent predators from attacking them.

Often, roosters will herd their hens up and fight predators to the death if they feel their hens are threatened.  Roosters aren’t armed with many defenses.  They can only peck and spur predators.

When a rooster attacks, it uses its spurs as the first defense. He will jump up and come spur-first at a predator.  These sharp spurs can easily jab into soft skin or flesh.

If you want to read more about removing rooster spurs, Hobby Farms has a detailed article about 3 methods to remove rooster spurs.

Why should I attempt to remove rooster spurs?

This can be a difficult decision.  If you have a rooster that is notoriously aggressive, don’t worry about removing his spurs.  Remove the rooster.

If you have a rooster that attacks you and tries to spur you frequently, removing his spurs won’t take care of the underlying problem.  I only keep roosters that are friendly towards myself and my family.  An unsuspecting child can be an easy victim for an angry rooster.

Don’t try to trim spurs on an aggressive rooster. If he’s aggressive towards people or pets, get rid of him.

Now, if you have a rooster that isn’t aggressive, there is still plenty of reason for you to consider removing his spurs.

Some roosters will injure their hens with their spurs.

When a rooster attempts to mate with a hen, he grabs onto her back with his feet and grabs her head with his beak.  If he is rough or has sharp spurs, he can damage the sides and back of the hens.

I’ve seen where some people opt to put protective saddles on their hens to prevent roosters from injuring them.  I think it would be easier to take care of his spurs once or twice a year than to fight hen saddles and trying to keep them clean.

Rooster spurs can injure the rooster over time.

Rooster spurs typically grow straight out at first.  Over time, the spurs begin to curl.

If the spurs curl and continue to grow long enough, they can curl back on themselves.  In extreme cases, rooster spurs can grow into the leg of the rooster.

Since chicken legs are so low to the ground, they can become infected easily if they grow back into the leg.

If your rooster’s spurs are curling and are close to the leg, then you need to trim or remove the outer layer immediately to prevent injury.

Roosters typically require 5-7 hens.  People with many hens can have multiple roosters in a flock.  As long as the roosters aren’t constantly fighting over hens, this is acceptable.

However, there may be times when multiple roosters will fight with each other over hens or to determine the pecking order.

To read more about why you should consider removing your rooster’s spurs, check out Community Chickens’ article about rooster spurs.

What are my options for removing rooster spurs?

There are several ways that you can remove rooster spurs.  You can split them up into two groups- permanent removal and temporary removal. 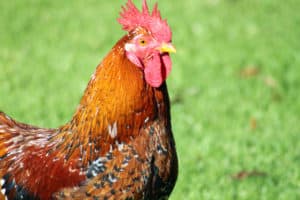 If you are interested in permanent removal, plan on hiring a veterinarian.

Rooster spurs do have leg bone inside of them, so you want to make sure the procedure is done correctly.  If you remove too much, you could damage the leg bone.

Preventing spur growth as a chick

When chicks hatch, you can easily locate the spur bud.  You can cauterize the spur bud in attempt to prevent spurs from growing.  For more information about baby chicks, read my post about preparing for baby chicks. 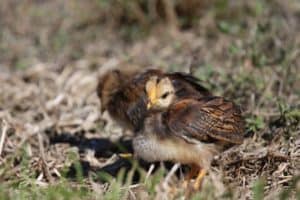 Rooster chicks can have their spur buds removed easily and permanently as a chick.

However, if you cauterize too much, the leg bone will be injured.

If you don’t cauterize enough of the spur bud, the spurs will grow anyways.  Spur buds that were partially cauterized are not only painful, but can lead to misshapen spurs when they being to grow out.

Your veterinarian will be able to show you how to do this procedure.  This is a fairly quick and cost-effective way of preventing spur growth.

Removing rooster spurs from an adult

If you have an adult rooster that has abnormal spurs or spurs that you want removed, you can have a veterinarian remove them.  The procedure does require the animal to be put to sleep.

Essentially, the vet will put the animal to sleep.  He/she will use a bone saw to remove the spur and underlying bone.  Afterwards the skin will be stitched together over the area where the spur was removed.

The wound left from this procedure very often becomes infected.

Surgical removal of spurs in adult roosters is expensive and time-consuming, but possible.

If you don’t want to spend a fortune removing the spurs from your rooster, you can trim them or temporarily fix them.

Remember, the outer layer of the spur is keratin and doesn’t have feeling in it just like your fingernails.

The spur does have bone and blood flow around the bony area, so you don’t want to damage that because it will be painful.

There are three main ways that you can temporarily trim or remove spurs.

If you have a metal file or a Dremel tool with a file attachment, you can easily file your rooster’s spurs.  You can file his spurs all the way down just before the bony growth underneath the keratin.

If you choose to file your rooster’s spurs, wrap him in a towel or cloth.  Leave one leg exposed at a time.  If he starts to freak out, cover his eyes and face.  This will help him to calm down.

When you file his spurs, make the end of the spur rounded.  That will prevent him from injuring anything with what’s left of his spur.

To clip your rooster’s spurs, hold him wrapped in a towel, just like if you were filing his spurs. You can cover his eyes if needed to calm him down.

Use guillotine style clippers and clip the portion of the spur off that you want to remove.  Since you are clipping them, there will be some sharp points.  It’s a good idea to go behind the clippers and file the sharp points off.

If you plan on clipping your rooster’s spurs, make sure that you have some blood stopping powder or cornstarch on hand in case you cut into the quick.

A word of caution- don’t ever attempt to put pain killing ointment on wounds on your chickens.  It is toxic to them!

Popping the keratin off

To do this, you’ll need a pair of pliers and either oil or a hot potato.  Hear me out on this one ya’ll….

So the outside sheath of the spur is keratin, which is simply a hard protein.  Just like your fingernails or hair.  It’s just a little bit thicker than hair or fingernails.

If the keratin is softened on the spur, then it can be popped off easily with a pair of pliers.

There are two basic ways that you can soften the keratin enough to pop the entire sheath off of the spur.

You can either rub the sheath down with oil (any oil will work), or you can use a hot potato.  To use a hot potato, take a potato and cook it fully in the microwave.  This takes about five minutes for an average sized potato.

While the potato is still hot, cut it and put the spur into the potato.  Make sure that you don’t burn the rooster’s skin with the hot potato!

Leave the potato on the spur for about five minutes.

The steam and heat from the potato will work quickly to soften the tough keratin.  Take the pliers and pull on the spur while twisting it to try to pop the outer sheath off.  If it doesn’t easily come off, put the potato back on the spur to soften it further.

When you manage to pop the spur off, you’ll see that it removes the entire hard outer portion.  This the longest removal method available aside from permanent removal.

Countryside Network has a really great Comprehensive Guide to Rooster Spurs that you can check out for more information. 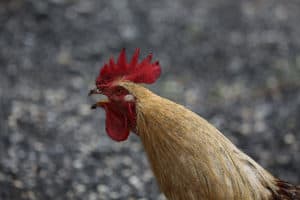 What to do with rooster spurs

If you have an aggressive rooster, then again, I highly recommend that he no longer be part of your flock!

It’s possible that he doesn’t have enough hens, and maybe you could add hens to your flock to try to make him happy.  I’ve also read that some people will carry their roosters around when they are in the yard with him as a show of dominance.

For me personally, I just get rid of them.  I don’t want to have to worry about whether or not they are going to attack my kids or pets when I am not looking.  That’s just it.

Sometimes though, rooster spurs should be removed for reasons other than the rooster is aggressive.  If the rooster is hurting your hens or his spurs are starting to grow back onto himself, then they need to be removed or trimmed.

If you want to read more about chickens, check out these articles:

How do you remove rooster spurs?  Let me know!