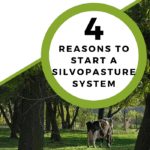 For some reason, both properties that we have lived on have been primarily wooded.  This is usually not ideal when you are trying to raise livestock.  Usually.  We’ve tried to plant grass in wooded areas before, with mixed luck.  While I was reading about the easiest ways to create pasture in wooded areas, I came across an idea that was a new concept to me- silvopasture.

I didn’t know that was something that people did on purpose!

I assumed that we were just fighting a losing battle by trying to grow pasture grasses in the woods…  Turns out that it can actually be very productive. 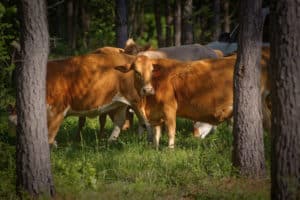 Silvopasture is a management technique that combines grazing livestock, forestry and pasture management practices.  When done properly, silvopasture allows for both timber production and livestock production on the same piece of land.

Traditionally, foresters and livestock owners worked very differently.  Growing timber and forages for grazing livestock were treated as two completely different practices.  Recently, there has been a push to save wooded areas to fend off climate change and global warming.

This has led to the birth of silvopasture.  Really, when you think about what silvopasture has to offer, it makes complete sense.

Silvopasture varies a little in different regions, but the basics are still the same.

In silvopasture, there are enough trees to create about 30-40% shade.  These trees are combined with shade tolerant forages to create a shaded pasture.  Trees that are commonly used here in the Southeastern U.S. include loblolly pine, slash and longleaf pine varieties.  These trees are paired with forages such as bahiagrass and crimson clover.

You can also establish silvopasture in an orchard.  In fact, this was a commonly used practice hundreds of years ago.

People that raised pigs often raised them in apple orchards.  The pigs would feed on the pasture between the apple trees, keeping the pasture cleared enough for the people to get to the apple trees.  Pigs also ate any fallen apples.  Maybe this is where the idea of eating pork with apples came from?

Loblolly pines are a popular choice in silvopasture.

There are several benefits to managing silvopasture-

1.  You’re creating a cooler, more comfortable environment for your livestock.

Your animals will more than thank you for the shade. Goats, bison, pigs, beef and dairy cattle can all be successfully managed in silvopasture.  Pigs cannot sweat, and will easily overheat.  Pigs would be less likely to die from heat stress if they were in pasture that was largely shaded. 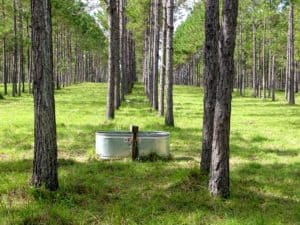 Look at all of that shade!

Other species of livestock will simply enjoy the cooler environment to graze in.  In the hotter summer months, animals will be able to comfortably graze during the day in the shaded.

The trees in silvopasture also help reduce the harshness of being outside when the weather is bad.  The trees act as a wind break for strong winds.  They also can help in beating rain or hailstorms.  Animals that are raised in silvopasture will still need somewhere to go to escape bad weather, but they will be much less exposed than animals left in normal pastures.

There are two main reasons that silvopasture benefits the timber that is grown on the land.  The timber will be fertilized more frequently than if it was left to grow on its own.  The forages that are planted may require fertilization to be established.  Some of that fertilizer will be used by the trees.

Since there will be livestock grazing on the silvopasture, they will also work to fertilize the trees and pasture with their manure that will be left behind.

Silvopasture is managed partially for the grazing of livestock.

This means that trees need to be pruned and trimmed to keep them from growing where the livestock can eat them.  Trimming the trees usually involves removing unneeded limbs or branches, which creates more valuable timber.  It also cuts out unnecessary growth, so the tree itself will grow faster. 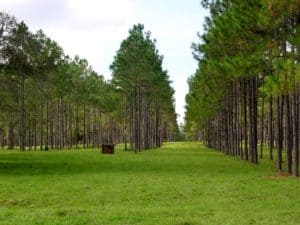 This is a very clean stand of timber. All of the undergrowth has been eliminated and forage is growing for livestock.

If you are interested in raising goats, they will often eat the competition that the trees have.  Goats are browsers by nature, so they will prefer to eat vines, shrubs and other small plants that will compete with the trees for nutrients.  This means that there will be more nutrients available for the trees. 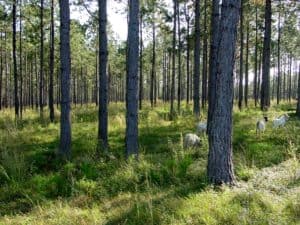 Goats are being used to clear out some of the undergrowth in this stand of timber. The land between the trees can then be planted out with more nutritious forages.

Managing timber in silvopasture has been shown to create timber stands that are harvested faster, and for larger profits than other timber management practices.

3.  You can create more nutritious grazing for your animals.

Planting forages in partially shaded or shaded areas means that you will be planting more cool season, shade tolerant species.  Many of these species have been shown to be more nutritious for livestock species than forages that are more adapted to full sun and warmer temperatures.

There are also instances in which edible tree or shrubs can be used with forages to create a completely edible area for livestock.  For example, in Mexico, Leucaena trees are grown with forages.  The Leucaena are eaten by the tropical breeds of cattle.  The Leucaena trees benefit from this frequent trimming from the cattle.  The cattle also have access to the grasses that are grown with the Leucaena trees.  The cattle grown on these farms have been shown to have increased milk production (by up to 40%!) and faster weight gain and growth rates.

With silvopasture, you’re able to grow timber that is worth more money, as well as raise livestock.  You’re getting a more diversified income than if you only grew timber or you only raised livestock.  You can combine the best of both worlds and do both!

There are several strong benefits to utilizing silvopasture on your farm.  This is a fairly new concept, so there are probably even more benefits than what we are even aware of.

Silvopasture allows you to grow more profitable timber, raise happier, more productive livestock, and allows you to help better the environment.  Not to mention all of the wildlife that you will start seeing once you incorporate silvopasture!

Silvopasture is being researched more commonly as a practice that can produce sustainable meat and timber.  Sustainability is a major concern in agriculture, so methods that are sustainable are becoming more popular.

I’ve read about silvopasture a lot, so I’ve compiled a list of resources for you that have been really helpful for me.  As someone that has wooded areas on my farm, I know these have helped me to rethink our pasture management.

These resources have been invaluable to me and understanding silvopasture and the benefits that it offers.

I think silvopasture is the way that we are going to go on our place.  We’ve already got good trees in place and we’ve started planting ryegrass and clover mixtures to establish pasture.