What is the Japanese beetle?

These are all questions that gardeners have during the peak of the growing season when Japanese beetles wreck havoc on gardens, orchards and flowerbeds across the U.S.

What is the Japanese beetle?

Japanese beetles were introduced to the U.S. in the early 1900’s.  Before 1912, it was legal to import plants from other countries that were rooted in soil.

More than likely, the grubs of the Japanese beetle came in the soil of Japanese iris roots that were imported.  Unfortunately, the law preventing the import of plants rooted in soil did not come soon enough and the beetles were introduced.

The Japanese beetle has a very distinct appearance and is easy to identify.

They are smaller beetles, usually about 1/2″ in length.

Japanese beetles have a metallic blue-green head, coppery back and white hairs on the sides of the abdomen that look like white dots. 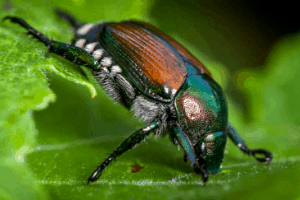 They won’t usually fly away when you get near them.  You will probably see them in small groups of 1-4 individuals feeding on leaves or flowers.

If you disturb them, they may drop to the ground below the plant.

What do Japanese beetles eat?

They wreak havoc on crops, gardens and landscapes each summer.  They are especially fond of roses, beans, grapes and raspberries, but they are known to cause damage to over 300 different plants. 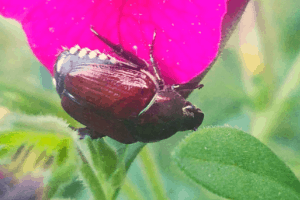 Japanese beetles will eat just about anything that they can.

A sure sign of a Japanese beetles is the way that they eat the leaves.  They eat the portion of the leaves in between the veins, leaving a skeleton of a leaf behind. 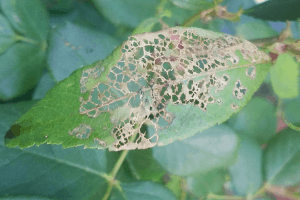 It is easier to control the Japanese beetle if you understand the life cycle of this pest.

Adults lay eggs in the soil in June. 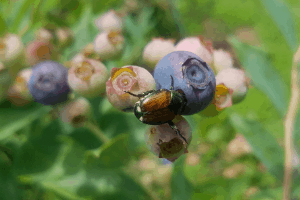 The grubs live in the ground all winter, for about 10 months.  They feed on roots of grasses and garden plants.  This often creates brown, dead patches of grass.

They emerge as adults the following June when they will start the cycle over again.  Adults only live to feed and reproduce, which takes around 40 days.

How to get rid of Japanese beetles

When Japanese beetles were first discovered in the U.S., researchers and entomologists tried for several years to eliminate them completely and control the population.

Unfortunately, their efforts were unsuccessful and the beetles have spread widely.

There are some methods that you can use to control the population in your lawn or garden.

Get rid of Japanese beetles in the garden

Row covers can be used to protect crops during the 6-8 week long feeding period.

Row covers will keep the beetles and other pests off of your plants, but they will also keep off beneficial insects, like pollinators.  Remove row covers temporarily if the crops need to be pollinated. 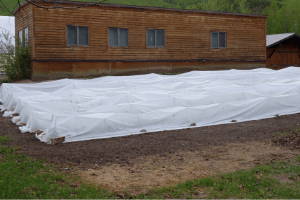 Beneficial insects and pesticides can be used to control the population of beetles.  There is more information about those methods below.

Get rid of Japanese beetles naturally

One of the most effective methods of control is by picking the beetles off by hand.  It is time consuming, but it does work.

If you pick them off by hand, do not squish them to kill them.  This causes them to release pheromones that will attract more. Drop them into a bucket of soapy water to drown them.

You can use a drop cloth under the plants.  Put it down early in the morning when the beetles are most active.  Shake the plant to make the beetles fall off and onto the cloth.

Then pick up the beetles and drop them into soapy water.

Get what you need for natural control:

Japanese beetle traps are most effective for controlling large numbers of beetles.  The traps contain attractants (eugenol and geraniol) that draw the beetles to the traps.  If you don’t have many beetles, don’t use traps because you may end up attracting more beetles than you will trap.

These attractant chemicals will also attract other insects. 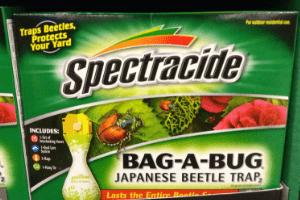 Not all Japanese beetle traps are effective, so if you use them, monitor them to make sure that you are trapping beetles and not attracting new ones to your plants.  Since they do contain attractants, put the traps well away from the plants that you are trying to protect.

Use a can of fruit cocktail to make a homemade Japanese beetle trap.

Open a can of fruit cocktail and put it in the sun for about a week to let it ferment.

Place the fermented can of fruit cocktail on a brick or wood block in a light colored pail or small bucket.  Fill the bucket with water until the water line is just below the top of the can.

The beetles will be attracted to the smell and will fall into the water and drown.

Place your fruit cocktail trap about 25 feet away from target plants.  If it rains on your trap, it will be too diluted to work so you’ll need to make a new one.

In Japan, the Japanese beetles are kept in check by natural predators.  In the U.S., they don’t have a predator that feeds solely on the beetles.

There are some insects that can be used to help control the beetles and keep the population low.

You can attract native species of Tiphia vernalis or Tiphia popilliavora.  Both of these parasitic wasps are predators of the beetles and can be beneficial.

However, they prefer to attack the larvae and can’t be used to control the entire population.

The soil can be covered in these nematodes when the grubs are small.  Reapply if the area is irrigated frequently.

Milky spore is a fungal disease that can be used to reduce the population of grubs in the soil.

This fungal disease leaves spores in the soil that the grubs eat.  The spores will stay in the soil for years and continue to kill grubs. 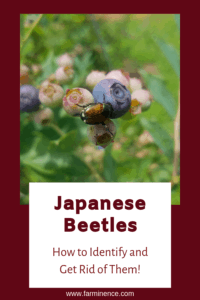 The spore count of the soil must be high for 2-3 years for it to be effective in reducing the population.  It can also be an expensive treatment as all soil within 5/8 of a mile should be treated for maximum effectiveness.

Neem oil and sprays that contain potassium bicarbonate are effective against Japanese beetles.

They ingest the spray and pass it onto their eggs.  The spray then kills the larvae before they can reach adulthood.

Be careful when using neem oil or sprays with potassium bicarbonate around water. They can kill fish and other aquatic life.

Reapply these sprays after rain.

You can also try to make your own homemade insecticide.  Combine 1 cup of vegetable oil with one teaspoon of dish soap.  Shake it up well.

Add the mixture to 1 quart of water.  Add 1 cup of rubbing alcohol and shake.

Put it in a spray bottle and use it early in the mornings, once every 10 days.  Don’t use if the temperature is above 90º F.

Watch your plants closely.  If you notice leaves wilting, rinse the leaves with clean water.

Roses are a favorite plant of Japanese beetles.  Insecticides don’t work well on roses because they unfold too quickly.  Trim the buds off of roses during the beetle season to reduce the damage to roses.  Once the beetles are gone, you can let them resume blooming.

You can plant geraniums to use as a sacrifice plant to save more valuable plants in your yard. 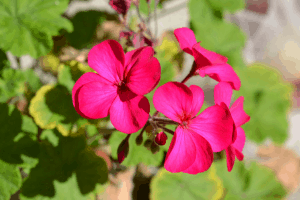 Geraniums can be added to your garden or flowerbeds easily. Japanese beetles love to eat them, and will stay away from more valuable plants.

Japanese beetles love geraniums and will eat the blooms off of them.  The blooms contain a chemical that makes the beetles dizzy and causes them to fall off.

Try planting garlic, tansy or rue around valuable plants to deter the beetles from them. 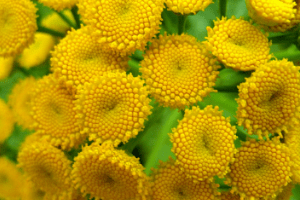 Tansy flowers repel Japanese beetles. Plant these, garlic, or rue close to plants that you want to protect.

Get rid of Japanese beetle grubs

If you don’t want to use nematodes, parasitic wasps or milky spore to control the grubs of Japanese beetles, you still have options.

In the late spring and fall, you can try to disrupt the life cycle of these pests.

Mix together 2 tablespoons of dish soap with one gallon of water.  Spray the mixture directly onto your lawn.  One gallon will treat 1,000 square feet.

The spray irritates the grubs and causes them to come to the surface.  Birds will come and eat the grubs, getting them out of your soil.

You can spray this on your lawn as much as once per week.

What are Japanese beetles?

Japanese beetles are a major problem.  They are a known pest in much of the U.S. and they are known to consume over 300 species of plants.

Unfortunately, it’s hard to eliminate Japanese beetles entirely, but there are some ways that you can help to control your population. 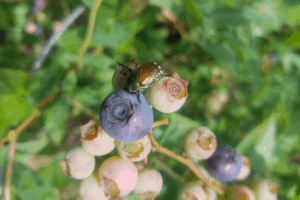 Here’s a short list of treatments for Japanese beetles (in case you skipped to the bottom!)