If you properly take care of it, your cast iron skillet will last for generations. You’ll be able to pass it on to your children and their children. Seriously, people use cast iron skillets that are almost 100 years old all of the time!

Cleaning cast iron skillets is pretty simple. Cast iron is pretty indestructible and when taken care of, is extremely nonstick and easy to clean.

After cooking in your cast iron, remove the food and rinse it out with hot water right after cooking. The food should come out pretty easily. Wipe the skillet down with a paper towel and put a small amount of oil back onto the pan before you put it away.

If your pan doesn’t wipe right out and has bit of food stuck on, you can use a pan scraper. I run into this occasionally when I fry chicken or pork in my skillet. I have a plastic scraper that I got several years ago with one of my Pampered Chef pizza stones. That scraper works great to remove the stuck on bits of food.

Sometimes there is a little bit of food left that the scraper left behind. You can scour your cast iron skillet with a coarse sea salt and paper towel or bristle brush. Don’t use steel wool to scour it unless you plan on seasoning the pan right after.

For really tough bits of food, add water to the skillet and put it on the stove. Boil the water in the pan to loosen the cooked on food. This works especially well with sugary, sticky foods like caramel.

Never, ever use soap to clean your skillet.

The seasoning of the pan is created by a thin layer of polymerized oil. Soap will destroy this oil layer and make your pan more susceptible to food sticking and rusting.

You can purchase cast iron skillets new, or you can find them cheap in thrift stores or yard sales. I’ve found two really nice skillets for a really good price at thrift stores. I have a big 13″ skillet that I found for $7. Its was a little rusty, but that’s easily fixed. 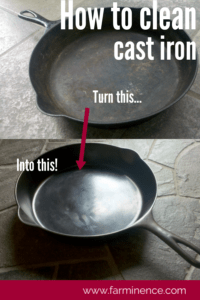 This is the ONE time that it’s ok to use soap in your skillet. Use a steel wool pad with a little bit of soap to scour the rust out. It’s ok to use soap because you’re going to season it. Make sure that all of the rust is off of the pan, including the handle and the bottom of the pan.

Rinse all of the soap off completely. Dry the pan and it’s ready to be seasoned.

As I mentioned earlier, the ‘seasoning’ of the cast iron is created by a thin layer of polymerized oil. Basically, a thin layer of oil is baked onto the pan to create a nonstick surface. If you notice food sticking more than normal in your pan, then it’s probably due for another seasoning.

You want to have a good clean pan to season. Remove any rust or cooked on bits of food.

Preheat your oven to 400 degrees Fahrenheit. On the bottom rack, lay down a large piece of aluminum foil. This will catch any drippings from your pan as it bakes.

Use a lint free cloth or paper towel and coat your cast iron with vegetable oil. You can also use canola oil. I wouldn’t use anything with a strong flavor, like oil or coconut oil. You don’t want all of your foods to have a weird twang because of the seasoning of the pan.

You want to completely coat the pan, but you don’t want oil pooling up on it either. Just do a nice thin coat all over the pan. Don’t forget about the bottom and handle. Coat the entire skillet.

Put it upside down in the oven and leave it in there for an hour. Turn the oven off and let it cool in the oven. Once it’s cooled enough to handle, take it out and look over it. It should look glossy all over. If it doesn’t, add oil and season it again.

I know when you buy new cast iron that many of them come pre-seasoned. I season mine again anyways. You can’t over-season a pan, so better safe than sorry.

Use your cast iron frequently. The more you use it, the better it resists rust and sticking. Plus, it fortifies your food with iron and doesn’t leach chemicals into your food.

Don’t use soap on your cast iron unless you’re intending on immediately re-seasoning it. Don’t let your cast iron soak in water. This also breaks down the polymerization of the oil and can make your pan rust. (I’ve been guilty of this, so if you do, make sure that you clean it really well and oil it after to prevent rusting.)

Old cast iron can be salvaged! Use soap and a steel wool pad to scrub any rust out. If soap and steel wool won’t get the rust out, it’s not too far gone. As a last resort, you can take it to a machine shop where they can sand blast it to remove the rust. Just make sure that you immediately season it (maybe more than once) to prevent the rust from coming back.

If you take care of your cast iron skillets and cast iron cookware, they will seriously last you forever.

Do you cook with cast iron? How do you use it? Leave me a comment below, I’d love to know!