A family farm isn’t complete without a dairy animal.  If you are considering getting dairy cattle for your farm or home use, where do you start? One of the first things that you need to consider is the breeds of dairy cattle out there.  They all have something different to offer, so which one should you choose?

I’ve broken down some of the basic information about each breed below so that you can start to figure out which one is right for you.

You may also be interested in Choosing a Breed of Pigs.

The most popular breed of dairy cattle in the United States is the Holstein.  This is the breed that is easily recognized for its distinct black and white pattern.

These cattle are massive, with cows weighing well over 1,300 lbs.  Many Holstein ladies weigh around 1,500 pounds.

These cattle aren’t bulky like beef cattle breeds of the same weight.  They are simply tall and large framed.

The milk they produce doesn’t have as high of a fat or protein content as some of the other breeds, as these ladies work to produce larger quantities.

This large quantity of milk they can produce has led to them being the favored breed by many dairy farms.

Holstein cows can be incorporated into beef herds to increase the milking ability of some beef breeds.

Choose a Holstein if you need multiple gallons of milk a day or plan to sell milk from your farm.

Something interesting: Holstein cattle’s black and white patterns are like fingerprints. Every Holstein will have a different pattern and this pattern can be used to identify the cattle. 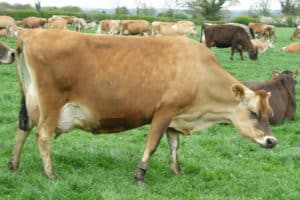 The Jersey, the second most popular breed of dairy cattle, is almost opposite of the Holstein in almost every sense.

The Jersey is the smallest breed of dairy cow, topping out at 1,200 pounds.  Most Jersey cattle weigh around 1,000 pounds.  Some are even as small as 800 pounds.

What they lack in size, they make up for in the quality of milk that they produce.  They won’t produce the large amounts of milk that some of the other breeds will produce each day, but they are the queens of producing milk with high percentages of fat content.

This breed of dairy cattle is also very resistant to udder problems and calving issues.  This means that overall, their level of maintenance is lower.

Jersey cattle are also known for being very docile and easy to handle, although they will spook easily.

Jerseys will produce a little under half of the quantity of milk as a Holstein, making around 11,000 pounds of milk per year.  That’s a little over three gallons per day.

They are also one of the cutest dairy breeds and produce babies that are insanely cute. 🙂 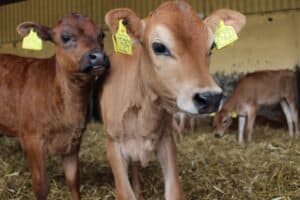 To read more about the Jersey breed, head over to the American Jersey Cattle Association.

The Brown Swiss is often considered the oldest breed of dairy cow in the world.  You can see the structure of the Brown Swiss shows the breed’s age. Their facial structure isn’t as refined and they have larger ears than many other breeds.

Brown Swiss cattle produce milk that has a high protein content, which makes them ideal cattle for producing cheese.

This breed of dairy cattle comes in second place on this list for annual total milk yield, right after the Holstein.

Brown Swiss cows on average will weigh between 1,300 and 1,400 pounds.  They are large, but not quite as large as the Holstein.

The Brown Swiss on average will produce about 22,500 pounds of milk per year.  Again, the protein to fat ratio makes the milk ideal for producing cheese products.

Brown Swiss are also known for their longevity.  The breed is very sound and typically exhibits excellent structure which allows them to be productive longer than many of the other breeds.

They are one of the few breeds that will perform equally well in both cold and warm climates and they are typically a docile breed that is easy to work with. 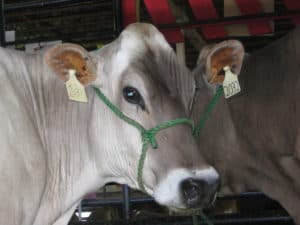 The Guernsey breed has been developed to produce large quantities of quality milk from pasture.  This breed of dairy cattle outperforms when compared to other breeds when looking at the ability of the cow to turn pasture into milk.

The Guernsey is also unique in the fact that their milk tends to have a slight yellow or orange tint.  This is due to the fact that the Guernsey produces milk that has high levels of beta-carotene, the chemical component that is also responsible for making carrots orange in color.  Beta-carotene is a source of Vitamin-A in the body.

Due to this high level of beta-carotene in the milk and the milk being a golden color, the breed is often called the “Golden Guernsey”.

Guernsey cattle are highly adaptable to different environments and can thrive in both hot and cold conditions.

Because of this ability, they are frequently crossed with Jersey cattle to create dairy cows that produce high-quality milk and are suitable for many environments.

To read more about the “Golden Guernsey”, check out the American Guernsey Association. 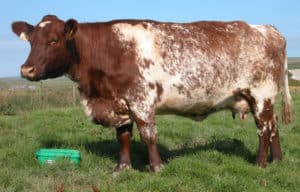 Shorthorns are large cattle and are highly competitive in their milk production.  On average, Shorthorn cattle produce around 15,000 pounds of milk per year or 4-5 gallons per day.

Many lines of the Shorthorn have been bred strongly for milk production, and are producing over 20,000 pounds of milk per year.

What makes this more impressive is that these cattle can produce a large quantity of milk and are primarily grazing on pasture.

Shorthorns are known for being a healthy fertile breed with low fertility issues. They are also one of the least inbred breeds of dairy cattle due to the open herd book that the breed keeps.

The Shorthorn has a favorable protein to fat ratio, which means that it is well suited for making cheese and other dairy products.

The Shorthorn is a large and productive enough breed that once a cow’s milk production life is at an end, they can still hold value as a meat animal.

For more information about the shorthorn, check out the American Milking Shorthorn Society. 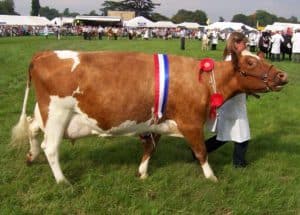 Ayrshires are a large breed of cattle, with the breed association specifying that cows should weigh well over 1,200 pounds.

Ayrshire cows on average produce 17,200 pounds of milk per year.

Ayrshire steers that are born are often marketed successfully as beef animals as they have better carcass qualities than many of the other dairy breeds.

Ayrshires are a horned breed and will grow large horns in excess of over a foot in length.  The horns used to be a treasured trait of the breed, but due to the impracticality, most calves are dehorned.

This dairy cattle breed is known for its excellent udder conformation and the ability to produce strong, vigorous calves.

Ayrshires are another efficient grazing breed and have the ability to turn pasture into milk with ease.

They are also very hardy and are well suited for cold climates.

For more information about the Ayrshire, check out the U.S. Ayrshire Breeders’ Association. 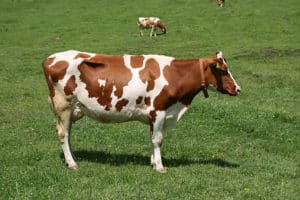 The Red and White Holstein is a newer breed of dairy cattle and was not considered a true breed until 1964.

Red and White Holstein are very tolerant to heat, which makes them well suited for warmer climates.  This sets them apart from their black and white cousins, which are more suited for colder climates.

The first thing that you need to figure out when you’re considering getting dairy cattle is to decide what the end goal is.  Do you want milk for your family to drink?  Do you want to sell milk?  Or do you want to make cheese, butter sour cream, and other dairy products?

If you are interested in making milk-based soaps, check out my article that shows you how to make a lavender goat milk soap in less than five minutes.

Once you determine what you want to do with the milk, then you can narrow down your breed options.  Some breeds are more suited to producing large quantities of milk, like the Holstein.  This would be a good fit if you plan on selling fresh milk.

If you want to make butter or cheeses, you may want to consider a breed such as the Guernsey or the Jersey.  They produce smaller amounts of milk that are rich.  You can create more dairy products with their milk.

Which dairy cow breed is best suited for your farm and family? Are you thinking about getting a family milk cow? Let me know below!