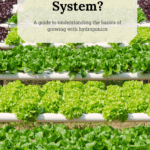 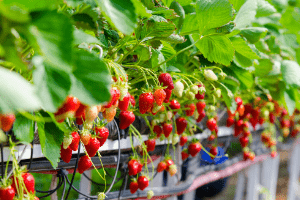 Wondering what a hydroponics system is and what kinds there are?

What is a hydroponics system?

The word hydroponics can be broken down and defined.  ‘Hydro’ means water and ‘ponics’ means labor.

Hydroponics is a form of horticulture, or growing plants, that occurs in water without soil.  Plants that are grown hydroponically are supported by growing materials, called medium, rather than soil.  Water is moved around the roots, supplying oxygen and nutrients to the plant.

Hydroponics systems are used today to grow many types of crop plants.  It is a common system used to grow: 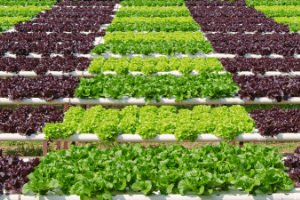 Experienced growers have had success growing other crops and cut flowers hydroponically, even growing plants like roses.

What is the purpose of a hydroponics system?

Hydroponics systems have been around for thousands of years.  Many of the plants grown in the Hanging Gardens of Babylon were grown using hydroponic techniques.  You may think of hydroponics systems as being new and high-tech, but the concept isn’t all that new.

The global population is constantly increasing, while the amount or farmable land is decreasing.  Traditional agriculture requires large amounts of nutrient rich soil, water and land to grow crops.  These resources are becoming harder and harder to obtain.

Enter the hydroponics system.  These highly productive growing systems can be used virtually anywhere to grow crops.  Crops grown in a hydroponics system are carefully managed and often healthier than the field-grown crops.

Greenhouses and hydroponics systems are popping up all over in areas where traditional agriculture has been unable to support fresh, local food. 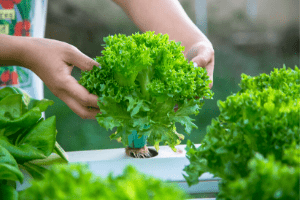 Hydroponics systems also produce crops that are cleaner and table-ready faster than field-grown crops.  There’s no soil to dirty the leaves of lettuce or herbs since they are growing in a water and nutrient solution.

How do you use a hydroponics system?

Using a hydroponics system is relatively simple, in theory.

In order to successfully grow, you need a good understanding of plant nutrition.  Normally, soil provides the nutrients to the plant and can act like a buffer if you accidentally put too much fertilizer in the ground.  Since you’ve removed the soil from the system, you’ll have to be careful to provide the correct amount of nutrient solution that will feed the plants without burning them with too much fertilizer.

How you actually use the hydroponics system will depend on the type of system that you choose.

Generally speaking though, you’ll set up your system in your growing space.  This will attach to your water reservoir and pumping systems that will move the water and nutrient solution through the system.

Once the system is set up, you can start inserting your plants.  A nutrient solution can be added to the water.  The water and nutrient solution should be drained and replaced when the nutrients are depleted (anywhere from 10 days- 3 weeks).

A well-running and tuned system doesn’t require much from you except monitoring.  Healthy crops that are grown hydroponically will need to be checked daily for pests, signs of disease, pruning needs and harvesting.

What all do you need for a hydroponics system?

Again, this depends on the type of system that you use.  Some systems require a medium in place of the soil to support the plant.  Perlite, coco coir and Rockwool are common mediums used in hydroponics systems.

You’ll need a large water reservoir and pump system that is large enough to supply adequate nutrients to your entire system.  It’s always a good idea to have a backup pump.  A blown pump is one of the most common reasons that hydroponics systems fail.  If your pump quits working, you don’t want to have to wait for another pump to arrive.

Advantages to Growing in a Hydroponics System

One of the biggest advantages to growing in a hydroponics system is the level of efficiency that it provides.  Traditional field crops require massive amounts of water and fertilizer.  This is because much of the water and fertilizer that seep into the soil are lost and cannot be used by the plant.

Everything is in a closed system with hydroponics, so there is no lost water or fertilizer the same way. 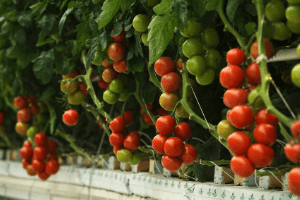 The plants grown in hydroponics systems are much healthier and productive than field grown crops.  It’s quite common for tomato plants to create vines that can reach well over 30 feet in height.  Pound for pound, healthy hydroponically grown crops will yield far more than field crops.

Disadvantages to Growing in a Hydroponics System

Miscalculating nutrient solution is a common mistake that new growers make.  If you catch it quick enough, you can salvage crops.  Let it go for too long and you may lose the entire crop. 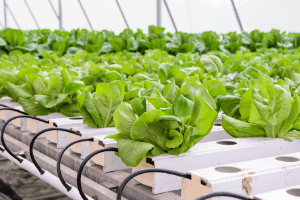 Hydroponics systems rely heavily on controlling the entire environment around the plant.  This can get expensive fast.  A greenhouse with all of the bells and whistles will produce mass amounts of crops, but it’s a large investment up front.

What are the different types of hydroponics systems?

There are several common types of hydroponics systems that are frequently used today.  Deepwater culture, NFT systems, aeroponics, wicking, ebb and flow, and drip systems are the most common. 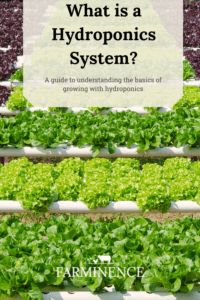 Deepwater culture is also commonly referred to as the reservoir method.  Plants grown in DWC systems are suspended over a tank and roots are suspended in the nutrient solution.

Air pumps move air through the water, around the roots.  This is a common growing method since it’s simple and there are less parts to fail.  Other systems require sprayers or misters, which can become clogged, especially when growing organically.

Because of this, deepwater culture systems are used frequently by organic growers.

Nutrient film technique is also known as the gutter system.  NFT systems resemble gutters that are on your house.  These trays sit on a slight angle and have holes punched in the tops for plants.

NFT systems are generally used to grow lettuce and herbs, which don’t take up much space.

Aeroponics systems work by spraying a mist of nutrient solution and water over the suspended roots of plants.

A spray nozzle can mist the roots or a fogger can supply the nutrient solution.  Aeroponics systems aren’t commonly used for commercial-scale growing.  Smaller aeroponics systems, like the AeroGarden, can be used by the home grower.  These small systems are an excellent way to try your hand at growing hydroponically.

Wicking is an easy and cost-effective method.  The concept behind wicking is simple.

An absorbent material, such as cotton, surrounds the growing medium that plants are in.  Part of the wick material is placed into the nutrient solution reservoir.  The nutrient solution is slowly pulled up the wicking material and is then wicked out by the roots of the plants.

Ebb and flow, or flood and drain systems, work by flooding the plants in intervals and then draining them. This process requires a pump with a timer, which repeats the process at specified intervals.

Many crops are accustomed to growing with periods of dryness; these crops are ideal candidates for ebb and flow systems.

In an ebb and flow system, the larger the plant is, the more nutrients it can absorb while flooded, which results in faster and faster growth.

A drip system, or a Bato bucket system, is another really popular type of hydroponics system.  Plants are grown in buckets.  The roots are suspended in a growing medium such as perlite.

The buckets are lined up and connected with drip irrigation systems.  The drip system provides a slow and steady flow of nutrients to the plant.  Drip systems have numerous parts that can clog easily, which is a concern for growers.

However, this is the system that is commonly used to grow larger crops, such as tomatoes, cucumbers and peppers.  Bato bucket systems are ideal for crops grown using the lean and lower system.

Is growing in a hydroponics system right for you?

Growing plants hydroponically can be a very profitable venture.  It can also be difficult until you figure out what you’re doing.

The investment up from can be daunting, especially if you decide to go all in.  However, once you get over the learning curve, you’ll have a growing system that will be profitable, productive and you can feel good about.