Building A Chicken Coop From A Garden Shed

Do you have chickens or are you planning on adding backyard chickens?  One of the easiest ways to make them a nice coop is to DIY a chicken coop.  And trust me, chickens need a coop to be safe.  Learn how we built a chicken coop from a garden shed. 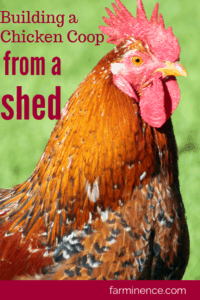 When we bought our house, one of the things that we liked about it was that there were several outbuildings.  We have a tool shed, a woodshed, a storage shed and an old garden shed that we used to store the animal stuff in.

This shed wasn’t being used well.  We turned it into a chicken coop and created some usable feed storage space.  In this article, I’m going to walk you through the steps that we took to create our chicken coop from an old shed.

I’ve decided to break this project into multiple steps for time’s sake.  This was a project that took us about three days to complete, and you may want to break it up into at least a couple of days as well.

If you want to read more, check out my posts about preparing for baby chicks or read about Easter Egger chickens.

Planning the transformation- building a chicken coop from a shed

We’ve had our own flock of chickens for several years.  When we moved summer before last to our new home, we had a flock of young chickens with no coop.  They soon started to roost with our pig, Lucille.

That was great considering that they didn’t get eaten in the middle of the night by predators.  It didn’t work so well when the hens started laying and were laying in the pigpen.

I’m sure Lucille thought it was great, though, she got free eggs out of the deal! 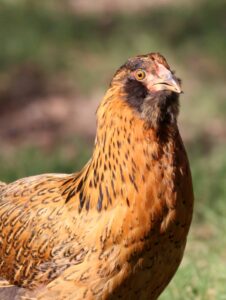 When we were planning out the coop, we tried to keep the hen’s needs in mind, as well as mine!

We decided to take an existing shed that we had on the property and turn it into a chicken coop.

The shed sat next to our house and blocked the view that we had of another shed and Lucille’s pen.  We moved it from where it originally sat.  This was fairly easy as the shed’s runners sat off of the ground on cinder blocks.

We simply hooked the shed up to our side by side and pulled it across the yard to where we wanted it.

If you plan on moving and utilizing a shed like we did, make sure that it is structurally sound before you decide to move it or use it.

Our shed had good bones, meaning the wood framing the shed wasn’t rotten and was sturdy both inside and under the shed.

So we moved the shed and leveled it up as we set it on a slight hill.  We used cinder blocks to level it up.  Once it was level, everything that had been kind of haphazardly thrown in had to come out… 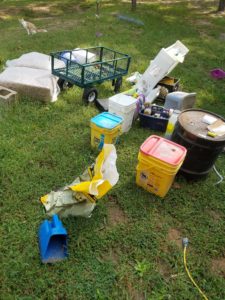 Moving all of the stuff out of the shed was a chore.

Preparing to build the chicken coop from the shed

As you can see, we were using the space to store animal care supplies, feed, and shavings.

However, the shed did not have any shelving, so the things in the shed were just scattered around the shed.  It was hard to keep the stuff in the shed organized and I felt like we weren’t utilizing the space as well as we could. Hence, turn half of the shed into a coop!

Once the shed was cleaned out, Michael had to build a wall to separate the chicken coop side of the shed from where we would store feed and build storage shelves for our animal supplies.  The first thing we did was decide how we wanted it to look.  The shed itself is 10′ x 14′.

The door for the shed is offset and was on the side that we had decided to put feed in.  This worked well though, as we wanted to be able to get to the feed without having to go through the chicken coop.  This meant, however, that the wall we needed to put up would need to have a door so we could access the coop.

Another factor we had to consider was a small window on the other side of the shed.  The window was screened and could be raised for ventilation.  This would be useful in the summer when we wanted to ventilate the coop.  We decided to make the window side of the shed the chicken coop.

Michael measured out how much lumber he would need.  He decided to frame the wall up with 2 x 4’s.  We would then cover the wall with plywood.  When he framed it out, he left the space that would be the door unframed. After the wall was up, we would go back and add the door so that we had something existing to mount it to when it was finished.

He attached a 2 x 4′ to the floor and the existing stud that ran along the floor of the shed.

Remember, this 2 x 4′ did not stretch all the way across the shed; we wouldn’t need that piece under the door so it only went where the wall would attach to.

He then ran the studs that would hold the plywood for the wall.  You should space the studs 16″ apart, measuring from the center of the stud. 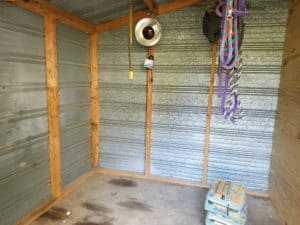 Here, you can see the walls have 2 x 4′ studs along the walls, ceiling, and along the floor around the plywood flooring. This picture actually shows part of the wall after we put it in place.  This is the storage side of the shed.

Once the studs were in place, the plywood was cut to fit the angle of the roof and the size of the wall.  This part went fairly quickly compared to putting the studs in place!  Once the plywood was up and screwed in place, we could begin working on the door. 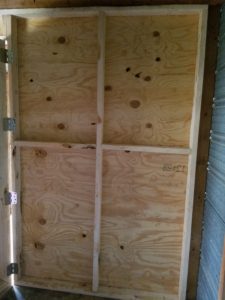 You can see how we studded up the wall. We’ve already added the plywood to the storage side. This is the view from inside the coop.

Michael took a measurement of the space for the door.  The door space was roughly three feet wide and went from floor to ceiling.

Make sure when you are measuring the door that you give yourself enough room for you to easily walk through, possibly carrying something.  I wanted to make sure I could comfortably walk through with a bale of straw or feed buckets.

Michael made the frame of the door outside of the coop and carried the frame in to make sure it would be a good fit before he put plywood on the outside.

It’s much easier to fix size or shape issues before the plywood is screwed on.  Once he checked the door frame and made sure it was a good fit, he took it back outside of the shed.  He cut the plywood for the outside and screwed it in place.  The only part left was to add hinges and a latch! 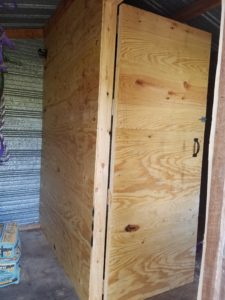 We added four hinges and made the door open to the inside of the chicken coop.  We did this for two reasons. 1. We didn’t want to compromise any of the space that we had for feed and supply storage.  2. If the door swung out into the feed side of the shed, chickens could easily make a getaway.  If the door is swung into the coop, the chickens are forced back into the coop when we enter the coop and escapees are less likely to run out.

We then added a simple latch and voila! We now had a blank canvas for the chicken coop!

In part two, I’ll tell you how we finished up the inside. 🙂  Have you turned a shed into a chicken coop or other livestock or animal housing?

Have you converted a shed into a chicken coop? If so, let me know how you did it below!