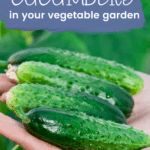 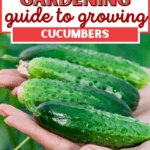 How to grow cucumbers. Growing cucumbers in your garden.

Cucumbers are one of the most popular vegetables grown.  They’re easy to care for and produce high yields.  They’re also a staple in many summer recipes.

Growing cucumbers is simple.  Keep reading to learn how to care for your cucumber plants and what to expect.

Should you plant cucumber transplants or direct sow seeds?

Now that you have decided to plant cucumbers and are looking to get your garden ready, your next step is to determine how you will be planting your cucumbers. Do you want to transplant seedlings into your garden or do you want to go with direct sow seeds? There are a few things to keep in mind when making this decision.

Cucumbers enjoy warm weather and need it until they reach maturity.  Cucumbers thrive in the hot summer heat, right along with tomatoes and peppers. 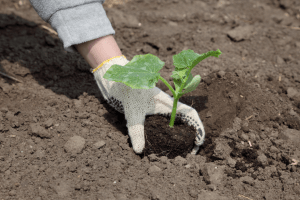 While some gardeners have taken the bolder route of direct sow seeds, most successful cucumber plants thrive best when transplanted after spending several weeks indoors.  Starting cucumber seeds indoors allows the young seedling to be in a temperature-controlled environment when they are most vulnerable.

Not sure how and when to start seeds indoors? Read this article for more information about starting seeds indoors.

If you do plan to direct sow cucumber seed, it is important to do this at least two weeks after the final frost of the season.  Not only does the temperature outside need to warm up, but the ground needs to be warm, also.

Remember, the cucumber seedlings are sensitive to cool temperatures.  A quick cold snap will end it for them.  It’s best to be patient and wait out the last frost, just to be sure.

This actually happened to me this year.  I started cucumber seeds indoors.  Once the threat of frost passed, I planted them in my raised beds. About a week later, we got a cold snap and I lost every single cucumber plant.  I had to buy replacements, which was frustrating after I’d babied those cucumber plants from seed!

When you go to plant your cucumbers, keep in mind their spacing needs in the garden. Because they like to grow out and low, they need at least a foot between each seed or seedling that is being planted into the ground.

Because some cucumbers can grow to be a foot long, it is essential to give them the space necessary to grow and produce.

Cucumbers will spread much further than a foot.  They create vines that will trail along the ground.  You may want to keep them away from other crops as the cucumbers will grow over and attach themselves to other plants.

Cucumber plants will climb, so you can give them a trellis or support to grow up. This will free up some of your ground space in the garden. 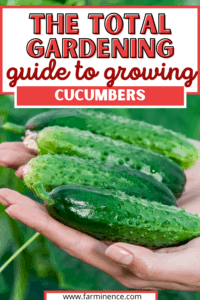 What do cucumber plants need to thrive?

In order to maximize your cucumbers and get the most out of this year’s harvest, keep the following tips in mind so that you can give your cucumber plants everything they need to survive.

Plant cucumbers in mounds or hills.

One of the most important things to know about cucumbers is that they must be planted in mounds or hills to thrive and have peak produce. These mounds allow the soil directly on the plant to get warmer than the soil below. Also, these mounds allow for the water to drain easier and give a direct path to the roots to keep the plants hydrated.

You don’t have to grow cucumbers in mounds, but you’ll get better results.  You can get a similar effect when you plant cucumbers in containers.

Cucumbers have a strong reliance on sunlight and need it throughout the day to produce the optimal yield during the season.

When you focus on the early morning sun for the cucumbers, you want to plant where the sun is the strongest in the morning and able to provide sunlight all day. If the cucumbers get the majority of their sunlight early in the day, they will continue to thrive even if there is shade later on.

Aim for a minimum of 6-8 hours of direct sunlight on your cucumber plants, with strong morning sun.

Cucumbers are a crop that absorbs lots of nutrients during their growing season.  They’re highly productive, which makes them heavy feeders.  They can quickly strip nutrients from even the richest soil.

This is why many gardeners and produce farmers use crop rotation from year to year.

When you use crop rotation, you are spreading your cucumbers out each year, allowing different parts of the soil to take on the nutrient demand while another area is replenishing nutrients for the following year. 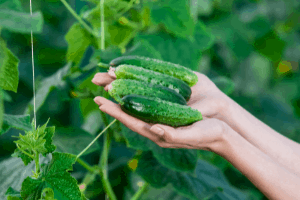 Plant bush beans (green beans) where you planted cucumbers last.  Bush beans are a legume and will return some of the lost nitrogen back into the soil.

Once your cucumbers begin producing, you should be checking them daily for new yields. In order to get the most out of your cucumber plants, you do not need to let cucumbers sit past their maturity date or your plant will stop producing.

Harvesting cucumbers regularly will also give you the best quality cucumbers.  Cucumbers that get too large will have a bitter taste and the seeds will become large and crunchy when you eat them.

When you remove cucumbers from the vine, the plant produces more.  You’ll get a much more consistent harvest by plucking them regularly.

Because cucumbers require so many nutrients, fertilizing them is an added benefit to keep them thriving and yielding until their season is over.

Organic fertilizer is the best for cucumbers, as they enjoy soil and compost that has slow-releasing nutrients to keep the cucumbers growing and replenishing their yields.

Cucumbers need a fertilizer that is well-balanced to support bloom, fruit, and overall plant growth.  Make sure that you use a vegetable plant fertilizer with nitrogen, phosphorus and potassium.

Do cucumbers need to climb?

Cucumbers need lots of space to sprawl out, so expect them to travel horizontally across the garden.

If you have some trellises or poles, you can put them over your cucumber plants to aid with their climbing, moving them vertically and giving them even more space. Cucumbers like to spread out and need lots of room if they are going to be directly on the ground. 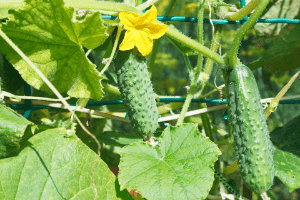 With cages and trellises, you can get most of the plant off of the ground and free up more ground space for other cucumbers nearby.

You can also get creative with how you let your cucumbers climb.

If you’re growing in rows or raised beds, you can create an arch with a sturdy piece of fence (like a hog panel).

The cucumber plant can climb up the fence, freeing up garden ground space.  A hog panel is large enough to create an arch that you can walk under. This is nice because the cucumbers will grow through the fence, making them a breeze to harvest.

For more ideas about growing cucumbers vertically on a trellis, watch the video below:

The fruit on your cucumber plants should be harvested regularly to grow new blooms and keep your harvest consistent. If the fruit is not picked regularly, they will continue to grow that particular fruit, putting all of their energy into existing blooms.

Oversized cucumbers are also not ideal for many varieties except for those that are meant to be longer. This means that the flavor and texture of your fruit will not be desirable.

Harvesting cucumbers is very simple.  Simply grab the cucumber and spin it until the stem breaks.  If you have a cucumber that doesn’t come off the vine quickly, you can snip the stem with a sharp pair of scissors.

Some cucumbers have burps (small bumps) on them.  These burps have prickles that look like small thorns.  They’re sharp and can poke into your skin.  If you’re harvesting cucumbers with burps, simply brush the prickles off of the burps before grabbing the cucumber.

Cucumber plants are fragile, so use caution when harvesting them. Don’t pull on cucumbers to remove them from the plant.  You’d be surprised at how easy it is to pull cucumber plants out of the ground!

Also, if your cucumbers are growing on the ground, be careful not to step on them.  Stepping on the stems can kill them.

When you are planting cucumbers, there are a few things to keep in mind to avoid so that your cucumbers are healthy and plentiful. 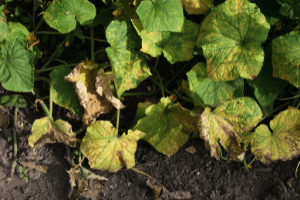 These plants are susceptible to a few different diseases that could take over your plant.

These diseases change the appearance of the cucumber and can affect their ability to continue growing. If you notice that your cucumber plant has a powdery substance or even a sticky substance, it has been infected and can die soon.

The cucumber beetle is often found around large numbers of cucumber plants in a garden. They are either striped or spotted and feed on the cucumber leaves. They scar the fruit and will stunt the growth of the overall plant. 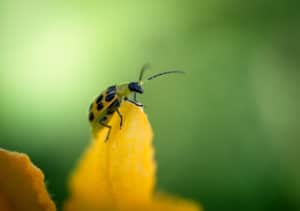 Aphids are some of the most common insects on cucumbers and found in environments across the country. Like other plants, aphids will hide on the underside of the cucumber leaves, and leave behind a sticky honeydew substance that encourages mold on your cucumber plants.

Use chemical pesticides as a last resort.

Cucumbers are an easy vegetable for anyone to grow.  They’re hardy and productive.  The cucumber is also very versatile.

Provide your cucumbers with ample space to grow.  That could be ground space or room to climb up a trellis or support.

Plant your cucumbers where they will get plenty of sun, with much of their sunlight coming from the morning sun.  Cucumbers need at least 6-8 hours of sunlight each day.

Cucumbers are some of the most high-yielding plants out there.  This is great for stocking your fridge, but it also means that cucumbers require a lot of nutrients.  Plan on fertilizing your cucumbers frequently with a vegetable plant fertilizer that contains nitrogen, phosphorus, and potassium.

Harvest your cucumbers regularly for the best yields and best-tasting cucumbers.

Cucumber plants are susceptible to disease and pests just like any other garden plant.  Although cucumbers are hardy, you’ll want to keep an eye out for signs of problems.