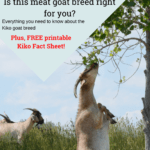 Kiko goats are an excellent goat breed to raise on small farms and homesteads.  Learn everything that you need to know about kiko goats here!

Kiko goats were developed in New Zealand.  This is a relatively new breed, having only been established in the 1980’s.

Breeders Garrick and Anne Batten developed the Kiko breed specifically for meat.  In fact, the word ‘kiko’ is a local Maori word that means ‘meat’.

The Battens were from northern South Island, where there were feral goats present. These goats were wild goats that were left behind from European settlers. These goats were hardy and self-sufficient.  They didn’t produce much meat or milk and were small in size. 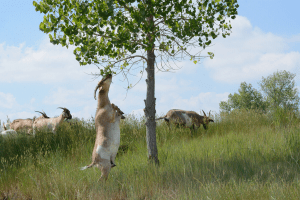 The Battens appreciated the hardiness and self-sufficiency of these feral goats.  They crossed feral does with Anglo-Nubians to increase their size and productivity. Toggenburgs and Saanens were also crossed with the feral goats.

After a few generations of selective breeding, the Kiko breed was created.  Kikos were hardy, adapted to the hilly environment and quite productive. In 1986, the breed was no longer open to crossbreeding and was officially established.

Kiko goats made their appearance in the 1990’s and are raised by meat producers.  They are treasured for their hardiness and productivity.

Characteristics and Traits of Kiko Goats

You’ve probably already gathered that one of the best traits about Kikos is their hardiness.  The breed was developed from herds that survived with no intervention from people.  They were able to survive both rain and cold with limited shelter.

The feral goats also didn’t require feeding or breeding intervention from people.  Kikos now have also inherited those traits.  They can forage for most of their food and don’t have many problems when it comes to breeding or giving birth.

Kikos can come in almost any color, although white is the most common color.  They are also a horned breed and can develop long horns.  Kiko bucks can have large, twisted horns.  Their horns come in handy as females are very protective of their babies. 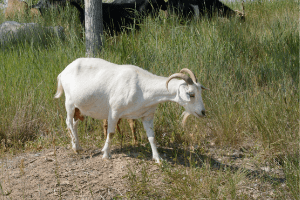 How big do Kiko goats get?

When you think of raising meat goats, you may picture the big, beefed up Boer goats.  Yes, Boer goats produce more flesh than Kikos.  There are some advantages to raising Kikos over Boer goats though that can make managing them easier.

Kikos are hardier than Boer goats.  The breed was developed fairly recently from feral goat herds that survived without human intervention.  They can not only survive during natural conditions, but they’re still able to gain weight without supplemental feed.

You’ll also find that they usually have kids without problems.

In the wild, goat does don’t have humans to help them with difficult births.  They either give birth successfully, or they don’t.  This eliminates the problem breeders from the population.  The does that survived were the ones that could give birth on their own. This trait has been passed on to today’s Kikos.  You don’t usually find a Kiko doe that requires help giving birth.  It’s still a good idea to have a goat kidding kit on hand for emergencies.

Kiko does have also been shown to wean more kids per doe than Boer goats. 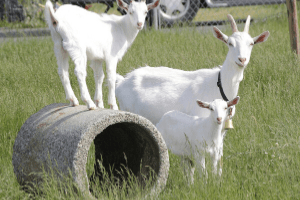 Kikos are hardier than Boer goats and a study in 2004 done at the University of Tennessee shows that Kikos are more resistant to internal parasites and hoof rot.  This is huge because treating hoof rot can be expensive and time consuming.  FAMACHA scoring can help with the management of the barber pole worm, but a breed that is naturally more resistant to them is even better.

Kikos are more active than Boer goats, which can make them more difficult to handle.  They are active like their feral ancestors.  In the wild, this helped them to stay fit, avoid predators and find food when food was scarce. 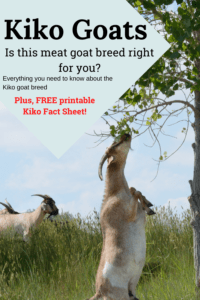 Kikos are raised as meat goats.  Many Kiko breeders are exceptionally fond of their Kikos and praise their hardiness, fast growth and self-sufficiency.  If you’re looking for a meat goat breed that is more hands-off, the Kiko may be right for you.

Kiko goats don’t put on as much muscling as Boer goats, which some breeders have found a solution for.  Many meat goat breeders will keep a herd of Kiko does and breed them to Boer bucks.  This gives them the hardiness and easy kidding found in Kikos while producing kids that will have more muscling.

Kikos are raised across the U.S. They are easily adapted to many climates and conditions and are able to thrive with the sparsest of forage.

As I mentioned before, Kikos are an ideal breed to raise if you’re interested in raising meat goats but don’t want to micromanage them.

There are many breeders across the United States that sell Kikos.  You can find purebred stock, New Zealand stock or percentage Kikos.  Percentage Kikos are the offspring that are the result of crossing Kikos with other breeds, typically Boer goats.

A quick Google search will pull up numerous sites and breeders offering Kikos for sale.  Keep in mind when purchasing goats that you want to buy from a reputable breeder.  Breeders should be able to provide proof of health, including vaccines, FAMACHA scores, feet issues, birthing records or any other health related issue.

There are multiple Kiko goat associations in the United States.

The American Kiko Goat Association  is the original Kiko goat registration and has been in existence since 1994.  You can find listings for Kiko goats for sale along with reputable breeders and breed information.

The International Kiko Goat Association is another membership organization where you can find more information about the breed and locate breeders and goats for sale.

You can also find information and goats for sale through these organizations:

Kiko goats don’t require as much supplemental feeding as some other goat breeds.  This means less money spent on them and more money in your pocket if you’re raising them for profit.  You can provide Kikos with supplemental feed to increase their growth rate.  Kikos have a very high feed conversion rate.  They are able to get the most out of their feed and turn it into growth.

If you provide supplemental feeding, consider the following feeds:

Kikos can be raised alongside other livestock, like cattle.  Co-grazing the two species has many benefits.  You’ll reduce the overall parasite load for both species.  You’ll also get more out of your pasture.  Goats and cattle prefer different forages.  Goat will eat the plants in the pasture that cattle avoid, so you won’t be harming your cattle operation by adding goats to it.

Kiko goats are active and hardy, both of which are good traits.  These traits can also have an impact on the housing that they need.

Kiko does and bucks are horned.  The horns on bucks can be quite long and twisted, so you’ll want to have them in a fence that will reduce the chances of them getting their head stuck. Don’t put them behind standard field fencing.  This fence type is the perfect size for them to get their head through.  Once their head is through, their horns will prevent them from pulling their head back out. 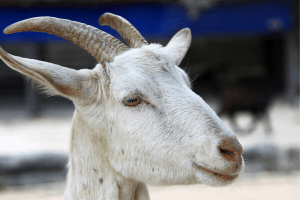 A goat with its head stuck will make all kinds of racket and can attract predators to it.  If it remains stuck for a long period of time, it can become an easy target for predators since it cannot fight back or run off.

The best choice for goat fencing is a V patterned fence.  This fence type is also costly, so many goat farmers opt to add a few strands of electric fencing to discourage goats from sticking their heads through the fence.

Although Kiko goats are hardy and less susceptible to hoof rot, they still need a dry place to escape bad weather.  Provide them with a three sided shed with a dry floor.  Kikos are very tolerant of cold weather, but if you notice your Kikos shivering in the winter, you should add heat to the shed.  A simple heat lamp or two is usually enough to keep them comfortable.

Are Kiko goats right for you?

Again, if you’re looking for a profitable meat goat breed that is relatively easy to keep and self-sufficient, then Kikos may be right for you.  Kiko goats are active, hardy and offer more resistance to cold, sparse forage, hoof rot and barber pole worm infestations.

Do you raise Kiko goats?  What do you like or dislike about Kiko goats? Let me know below!