This lavender goat’s milk soap is amazingly easy to make, super rich and has a wonderful scent.  Honestly, it has become one of my favorite soaps to use!

I love taking baths.  I also love to be outside working, so I like taking baths and showers that much more.  Honestly, the amount of soap that I go through is probably outrageous compared to normal people!

I don’t bathe as much as some of those extreme TV show folks do, but it’s still probably more than the average person.  It happens when you try to look presentable (most of the time :)) and enjoy working with animals and dirt.  So I decided that I would try to make my own lavender goat’s milk soap.

I always see recipes when I’m browsing on Pinterest for all of these really cool types of soap.

Swirly colored soap, soap with decoration on top, hot method soap, cold method soap, the list goes on and on.  Since that was going to be my first time trying it out, I read several posts about getting started.

A few of the posts that I read mentioned that you can buy basic soap at craft stores, melt it, and add things to it.

I went to Hobby Lobby and found my way to the soap making section.  There were a few choices for a basic soap.  I picked up a large block of goat’s milk soap.  This was going to be the base that I would melt down and add to.

I love lavender, vanilla, milk and honey, and basically any other warm fragrance.  I picked up a small bottle of lavender soap fragrance, some dried lavender and some soap dyes to make it fun.

What you need for lavender goat’s milk soap

For this recipe, I ended up using the goat’s milk soap, lavender flowers, lavender fragrance, old-fashioned oatmeal and the lilac soap dye.

I bought a three pack of square soap molds since that was cheaper than buying a large soap mold.  As I get better at this, I’ll probably have Michael build me a small soap mold. 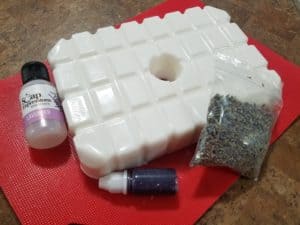 When I opened the package of soap, I realized that it was scored into cubes.  I got a knife out to cut the cubes up.  I wasn’t sure how much I would need, so I roughly guessed and started cutting.  You will be surprised at how easily the soap cut! I was expecting it to be hard and it was actually pretty smooth and easy to cut.

I cut four cubes off of the big block and fit them into the mold.  It seemed like four cubes would be about right for one of my square molds.

Since I had three molds, I cut twelve cubes off of the large block.

According to the soap instructions, you can either heat the soap in the microwave or in a double boiler.

I was anxious to see how this was going to turn out, so I put it in a large bowl in the microwave. 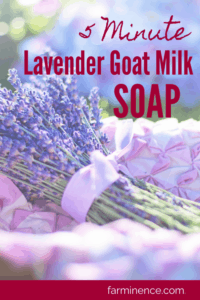 I used about a tablespoon of the lavender flowers and about two heaping tablespoons of oatmeal. 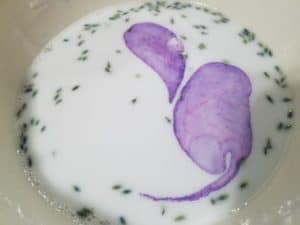 I stirred everything up really well.

While I was adding the dye, I noticed that the dye wanted to stick to the side of the bowl at first, so I had to make sure to scrape the sides of the bowl to evenly mix the color in. 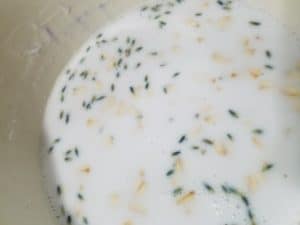 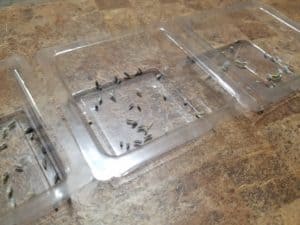 The bowl I used for the soap has scalloped edges, so I simply poured the hot soap out of the bowl.

If I was using a regular bowl, a funnel would have probably been necessary.

I mixed the soap really good one last time and started slowly pouring soap into the molds.

The amount of soap that I made was perfect for the molds that I used.  While I was pouring, I could smell the soap and it smelled amazing! 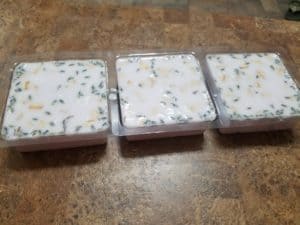 I let the lavender goat’s milk soap sit on the counter and cool for about an hour before I took it out of the molds.

After I let it sit for about an hour, I started trying to pop it out of the molds.

The easiest way I found to remove it was to pull on the sides of the molds first to loosen the soap.  Then I flipped the molds upside down and pressed gently on the mold to push the soap out.

Air will start to creep in the mold and you can let it slowly slide out of the mold. 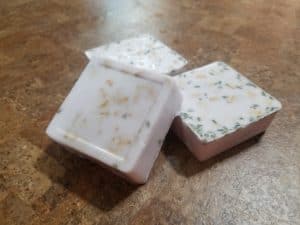 And that’s it! The longest part of the whole process is letting the soap cool so it firms up.  The rest of the process takes about three minutes.

Have you made goat’s milk soap?  What do you put in your soap? Let me know!